CIA Whistleblower John Kiriakou Slams Torture, Apathy, and the War on Dissent in the US 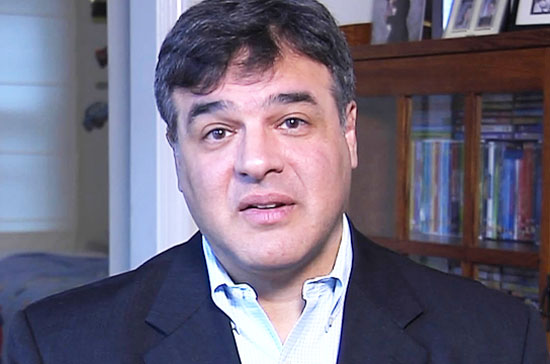 John Kiriakou never imagined he would become, much less be called, a whistleblower for speaking out publicly against his CIA employer over a shadowy torture program he’s come to believe amounts to the most nefarious of violations of international law, a heinous crime against humanity, and an affront to otherwise-touted American values of freedom and justice. But that’s what happened.

And the ex-CIA officer languished behind bars for nearly three years for what amounts to a witch hunt targeting dissenting voices — those situated at the highest levels of government, down to military and surveillance contractors, and even extending broadly enough to begin quashing the free press. Much of this vitriolic war on freedom taking place inside the confines of the United States arrived neatly packaged on the coattails of the 9/11 attacks — its War on Terror sufficiently ambiguous to include actual terrorists as readily as whistleblowers in its sights.

Mastered impeccably, as no other administration in U.S. history could have aspired, the War on Terror birthed an interminable web of odious and authoritarian programs, including, ultimately, the right of the State to militarily detain — sans attorney and sans all due process — an American citizen anywhere in the world, including U.S. soil, should they be even suspected of terrorism.

It also spawned the surreptitious re-initiation of the CIA’s torture program — one deemed both illegal and an egregious violation of human rights long before. Atrocities have been committed in the (proven incorrect) name of gleaning sensitive information, including the use of waterboarding — a technique creating the conditions to suffocate a person repeatedly, ostensively forcing them to speak in lieu of enduring further torture — although the echo chamber at the CIA did not treat the violation of international law as wrong, in any way.

Kiriakou, who eagerly arrived at the CIA in 1990, ultimately landed the title of Chief of Counterterrorist Operations in Pakistan in the post-September 11th world. He headed an operation in March 2002, in Faisalabad, during which Abu Zubaydah, believed third-in-command of Al Qaeda at the time, was captured.
After resigning from the CIA in 2004, Kiriakou moved to consulting, including as a terrorism consultant for ABC News. Shattering all illusions the War on Terror possessed no dark side, Kiriakou ripped into the CIA’s use of waterboarding — confirming its active practice during interrogations of senior Al Qaeda officers in an interview with ABC. The agency took note.

But the provocation seemed to linger in the collective spy agency mind, and, when Kiriakou exchanged information later determined to be classified, with reporter Matthew Cole, who mishandled it severely, the CIA secured the albeit baseless means to proceed with an unofficial punishment of the ex-officer for the aforementioned transgression. Incinerating the tightly-steeled door previously hiding the malignant outgrowth that is the torture of human beings by a government agency no friend of compassion should have riled American tempers beyond respite, or until transparency of torture’s practice and oversight could be applied — save, of course, for the barbaric program’s deserved termination. Instead — in thirst for propaganda-proclaimed security against a terrorist threat the U.S. government, itself, perpetuates — the somnambulant American public hardly blinked. An apathy astonishing in its naked inability to see the humanness in neighbors not situated next door — an apathy gifted by the Pentagon so war can continue propping up the defense-industry laden economy, regardless of the destruction wrought.

Asked to discuss this dangerous and lasting trend of apathy from the American public on the topic of torture — and its undeniable repercussions — as carried out by the United States government, the whistleblower explained:
“You know, one of the things that’s been really distressing to me, not even just recently, but over the years, over the last decade, is that poll after poll after poll shows that a clear majority of Americans supports the torture program. And, after everything we’ve learned about torture — that it’s illegal; it’s immoral; the United Nations considers it to be a crime against humanity; that it doesn’t work — Americans are still supportive. In the immediate aftermath of the 9/11 attacks, I was angry, too. I wanted to kill or capture as many members of Al Qaeda as I could — as a CIA officer. But we can’t lose sight of who we are as a people, as a country.”

Elaborating on why he feels trenchant apathy, rather than compassion or outrage, has been the collective response to the torture revelations, Kiriakou noted:
“I think, for most people, it’s a kneejerk reaction — they’re not fully briefed; they’re not fully aware; they don’t know that there’s a 1946 Federal Torture Act that bans torture; they don’t know about the McCain-Feinstein Amendment; or about the United Nations Convention against torture — I think that’s part of it. I think the other part of it is that American Exceptionalism is a dangerous thing — and that people genuinely don’t care about respecting international law, or about what other countries think about us.”

Why that has been the case can be attributed to a lengthy, if convoluted, list of factors — perhaps the fury over 9/11 and subsequent attacks never having faded, most elemental among them — which have tacitly, surreptitiously, and brazenly cleaved the populace along such superficial lines as blind patriotism versus holding government accountable for the worst of transgressions. Without resolute resistance from the American people to untenable acts of torture committed by the CIA, or any other government agency or contractor, blowback might as well be signed, sealed, and delivered — even, ultimately, to our front door.
To ensure morally reprehensible programs continue unabated — largely to prevent the withering of the U.S. war machine from lost profits — pro-war propaganda and an atmosphere conducive to xenophobia have veritably removed connectivity and compassion from the equation. 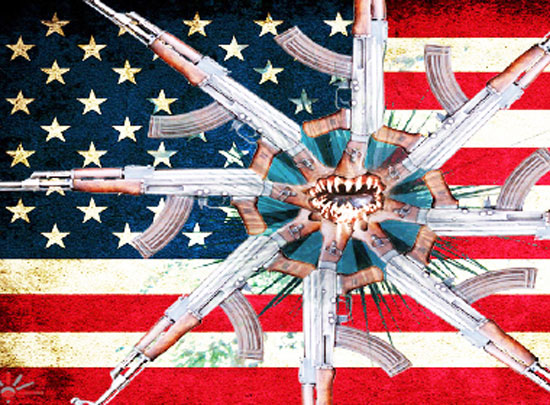 “We’ve transitioned into a permanent wartime economy, without even realizing that it was happening,” Kiriakou continued. “We have been literally at war, continuously, for the last sixteen years; and, there’s nary an objection on Capitol Hill, or in the media, or even just among the general population of the country. We’ve just accepted, without comment, the fact that we are permanently at war. And, if we weren’t at war suddenly, our economy would go into recession.
I think that our leaders have done a great disservice to the American people by tricking us into thinking that this is normal — that it’s normal to constantly be fighting other countries around the world.”
Further, “When it’s only poor people, or People of Color, or really, really patriotic right-wingers, who are going to fight these wars — and the deaths and the injuries don’t touch the average American — it’s easy to forget that it’s happening.”

As the former CIA officer-turned champion of human rights pointed out, a typical U.S. citizen likely doesn’t comprehend how long troops have been present in Afghanistan, Iraq, or why our government insists military intervention is happening in Syria, or could happen with proxy, Russia, or even Iran — much less that an active campaign now rages in Somalia. Expecting to enjoin dissent against militaristic and political agendas about which most aren’t even cognizant can seem an exercise in futility.
“I don’t think that people even know,” he emphasized, “or if they know, I’m not sure that they care — because it just doesn’t affect them on a day-to-day basis.”

Beyond American public apathy, however, another dangerous condition, in which the torture program thrived, unhindered, surrounds the “utter and complete lack of Congressional oversight”.
“The oversight committees aren’t oversight committees: They’re cheerleading committees … When the CIA comes and asks permission to do something, they cheer them on and egg them on and increase their budgets, and there’s never any real oversight.” 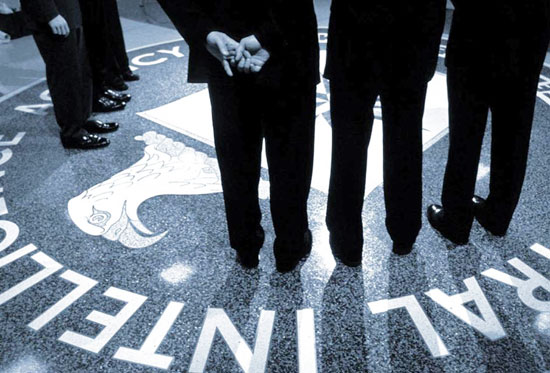 When the very committees meant to act as watchdogs against abuse and corruption instead rubber stamp any ill-fated program the clandestine agency chooses to manifest, little can be done to quash potentially ruinous repercussions consequent of that bad policy. Indeed, Kiriakou emphasized entities meant to oversee such programs consist primarily of officials also seated on multiple such committees — meaning, their part-time devotion guarding against failed policies, by design, lacks teeth.

But if little consideration is reserved for debating ethics and oversight, likely the worst result of torture writ large — or, for that matter, of indiscriminate bombing campaigns against sovereign nations against which no declaration of war has officially been made — is blowback.

According to The Spy Who Knew Too Much, however, cognizance of blowback from the CIA’s secretive, heinous torture program has not brought the topic any more to the forefront, and although the practice putatively ceased under President Obama, this slipshod attitude surrounding the costliest of foreign policy and human rights missteps has not changed.

Kiriakou observed that “the primary reason to sit down and review these programs is blowbackˮ.
“Even when I was at the CIA … thirteen years ago, blowback was never given any consideration on the Hill. We certainly talked about it at headquarters, but the blowback we were concerned about was Intelligence blowback, not political or policy blowback. And, so I think, on the Hill, people just aren’t really used to focusing on this kind of thing, and so I think they don’t really … they don’t really care.”

When militants, terrorists, and individual actors repeatedly carry out malicious acts while citing iterations of U.S. foreign policy — more keenly, American militarism and imperialism around the globe — it seems past time to examine blowback as a peril inextricable from (at least, superficially) laudable goals.
To wit, as Kiriakou penned for TruthDig, “James Mitchell and Bruce Jessen, the two contract psychologists who were the masterminds of the CIA’s torture program, are in for a heap of trouble. They are defendants in two major lawsuits accusing them of designing, implementing, overseeing and personally participating in the CIA’s post-9/11 torture program. That they did exactly that is not in doubt. Indeed, Mitchell has written proudly of his work in a new book. But what makes these cases newsworthy is that the CIA has apparently turned its back on the two, offering no support and even cooperating with the plaintiffs by voluntarily turning over documents and refusing to supply CIA officers to serve as defense witnesses.”

Dismissal of its perpetually-protective stance of agents accused of misbehavior, Kiriakou posits, evinces a telling shift in the CIA’s position on torture — as the shame of an agency’s failed policy begins blowing back in attempts to hold specific people accountable for grievous wrongdoing. While that would appear true to some degree, how that indicator could be taken as a positive development, without also considering Washington’s veritable war on whistleblowers — a definitive method for ensuring lack of transparency in government, a censored press, and a somnambulant, security-over-freedom-loving populace?

Silencing dissent inarguably also involves the muzzling of whistleblowers in conjunction with erasure of transparency in governmental policy, both to camouflage and perpetuate unsavory and illegal acts — such as the Bush-era CIA torture program, one proven fruitless and, worse, contrary to virtually every agenda the American empire claims in the complex Middle East theater. In fact, this domestic and international sprint into unnecessary self-destruction typically characterizes a moribund, decaying empire — desperate to effect control as it slides into the annals of history.

Further in the interview of John Kiriakou elucidates the belligerence playing out in the Middle East and elsewhere, and the perilous course it likely signifies, as well as more on what the term “whistleblower” truly means, and why freedom of the press — including Wikileaks — is central to maintaining a base of rights and liberties during these tumultuous times.