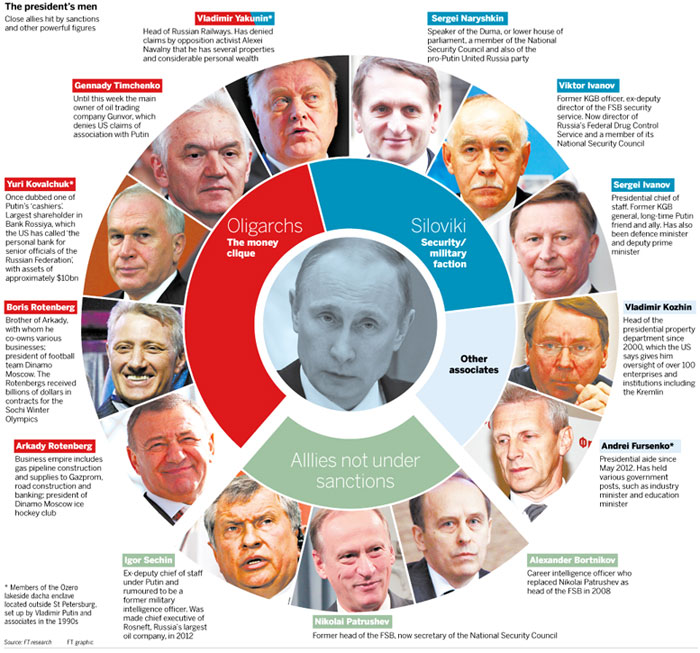 “I just told them [the oligarchs] that they had to be equidistant from the government. And I told them that if they acquired their property within the framework of law, then we would not seek to take that property from them… But everyone has to understand that everyone has to be equal before the law.ˮ

During his long interview with Vladimir Putin, Oliver Stone declared: “You’re credited with doing many fine things in your first term. Privatization was stopped. You built up industries … a real son of Russia – you should be proud. You raised the GDP.”

Putin, however, took a slightly different view of things. He basically told Stone that the best way to bring a country back to its economic feet is to bring the oligarch schemes down. He told Stone:
“I didn’t stop privatization. I just wanted to make it more equitable, more fair. We put an end to some schemes – manipulation schemes – which led to the creation of oligarchs. These schemes that allowed some people to become billionaires in the blink of an eye.”

Stone proceeded to ask: “I saw the footage of you with the oligarchs in 2003-2004. It was an interesting meeting. But did you have head-on collisions with Berezovsky and people like that?”
Putin replied: “I just told them that they had to be equidistant from the government. That was the fashionable term back then. And I told them that if they acquired their property within the framework of law, then we would not seek to take that property from them… But today laws are changing and they have to conform to the new laws… we’re going to continue with the privatization on a fairer basis and do everything in our power to secure these properties, these titles, but everyone has to understand that everyone has to be equal before the law.”

Maybe Putin will get a copy of E. Michael Jones’ magnum opus, Barren Metal: A History of Capitalism as the Conflict Between Labor and Usury. That will allow him to have a better understanding of the capitalist system and its usurious enterprise. Capitalism, like Communism or Socialism, is a pernicious system that always ends up destroying economic progress and the national family in particular.

In any event, Putin essentially brought something to the table. To say that everyone is equal before the law basically means that the oligarchs and the usurers cannot suspend the law to suppress the poor and needy, which is exactly what happened when the oligarchs in the United States completely destroyed the Russian economy back in the 1990s.

The oligarchs cannot live without usury. And for usury to take place, the oligarchs have to suspend the moral law. E. Michael Jones has been saying for years that capitalism is “state-sponsored usury,” and usury, by its very nature, will destroy any economy system. It is actually a cancer to the world.

Over the centuries, the oligarchs and the Khazarian Mafia have spread that cancer throughout the world in the name of “economic science.” The people who brought this pseudo-science to the new world are mainly Isaac Newton and Adam Smith.

As Jones declared in an interview last year: “The idea that capitalism is «simply economic exchange or just free enterprise» goes back to Isaac Newton, who famously said, «Hypothesi non fingo» or «I frame no hypotheses».” In other words, it’s impossible to argue with the English Ideology, which invariably masquerades as “science” or an impartial description of the universe.
He said: “Newton used the inverse square law, which is true, as the stalking horse for promoting a pagan world view, the resurrection of Empedocles’ idea that the universe was composed of two forces, love and strife. Newton called these forces gravity and inertia, and Adam Smith, taking his cue from Newton and the English Ideology, applied them to the economy by calling them self-interest and competition, economics set off trying to become pseudo-physics as a way of disguising the fact that it became increasingly ideological and increasingly a defense of the prerogatives of the creditor class against the claims of the debtor. That is what it became in the United States; that is what it is today. Capitalism is state-sponsored usury; it is not a defense of the free market, because if it were, the capitalists would not allow the economy to become overburdened with debt. Because debt strangles the economy, it is the opposite of free enterprise.ˮ

As Michael Hudson has pointed out in his book Killing the Host, free enterprise now means freedom for the oligarchs to extract rent or usury from the economy without government interference. That the terms have become synonymous is a tribute to the propagandists, otherwise known as Kochsuckers, whom the oligarchs have hired to propagandize for their point of view.

CIA Whistleblower John Kiriakou Slams Torture, Apathy, and the War on Dissent in the US

The Reign of U.S. Propaganda