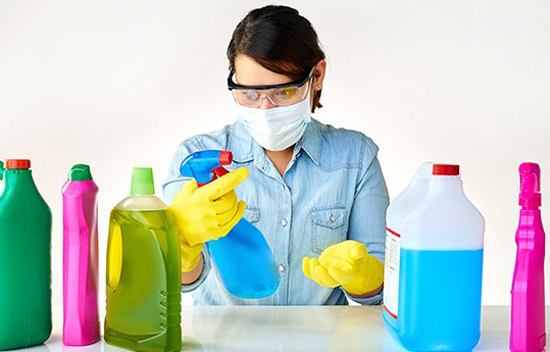 A surprising new study on the long-term health effects of cleaning products found that inhaling sprays and other chemical cleaners at home or work may be as damaging to lungs as a 20-year, pack-a-day, smoking habit.
Scientists at the University of Bergen in Norway led an international team of researchers on a mission to explore health risks associated with a very common task: housecleaning.

While the harms of chemical exposures are well known to science, little research has been done on the effects of repeated use of common household cleaners, such as those used by millions of people every day when cleaning the home or office.
These findings illustrate the unknowing risks we take with common chemicals, whose use has become so ubiquitous with “clean” we don’t question the safety of occasional use. But what we might consider “occasional” could be more than enough to do lasting harm to the body.

The study, released in February 2018, investigated the long-term effects of cleaning with commercial products, on lung function and airway obstruction.
Numerous prior studies have linked inhalation of cleaning products with increased risk of asthma, prompting researchers to question the impact to average people from conducting routine cleaning, defined as more than one time per week, either at home or at the workplace.

The research, published in the American Thoracic Society’s American Journal of Respiratory and Critical Care Medicine, tracked 6,230 middle-aged men and women over the course of twenty years. A questionnaire by the European Community Respiratory Health Survey (ECRHS) was given three times during the study, regarding cleaning activities and types and frequencies of products used.
Participants took an entrance screening that defined their cleaning activity as “not cleaning”, “cleaning at home” or “occupational cleaning”. They were also asked if they used a “cleaning spray” and/or “other cleaning product” more than one time per week. Baseline lung function measurements were taken at the start of the research period via spirometry, a basic lung function test that measures the amount and/or speed of air that can be inhaled and exhaled. Spirometry measured two factors: Maximum Forced Vital Capacity (FVC) and maximum Forced Expired Volume in one second (FEV1).

A bronchodilator test was performed to measure airway obstruction. Individuals with measurable airway obstruction were excluded from analyses. Upon conclusion of the study, data were analyzed and adjusted for potential confounders, such as impact of cigarette smoking on lung health.
The findings are alarming for what they show, and unexpectedly gender-specific. Women who cleaned at least once per week, whether at home or occupationally, suffered significantly more decline in overall lung function across all markers, as compared to women who did not clean.

This decrease in lung capacity was made worse by using sprays and other cleaning agents at least one time per week. The prevalence of doctor-confirmed asthma increased in women between the first and second phases of the study.
Airway obstructions increased between the second and third phase of the study period, although this did not appear correlated to use of chemical cleaning agents.
Other particulate that is disturbed during cleaning activities, such as household dust and debris, may be a factor in this increase. 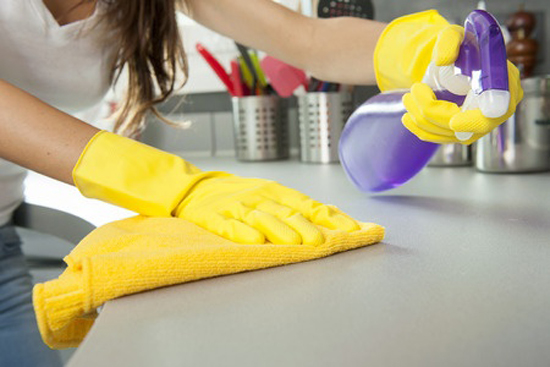 Interestingly, cleaning was not significantly associated with lung function decline in men, or with airway obstruction. Researchers noted that this may be due in part to men being under-represented in the sample group, at just 47% of participants.
They speculated that men are likely to experience different exposures than women, i.e., engaging in industrial cleaning, an activity researchers admitted their entrance questionnaire might not have captured, leaving the “occupational cleaning” category with few male participants.

Perhaps a better explanation lies in the fact that women do most of the household cleaning. Among the 3,298 female participants, a large majority (85.1%) reported that they are the person cleaning at home, compared to just 46.5% of the 2,932 male participants. Additionally, a significantly larger percentage of women reported occupational cleaning: 8.9% or 293 women, versus 1.9% or 57 men.
Finally, researchers noted that women have demonstrated in studies to be more susceptible to other mixed chemical exposures, such as tobacco smoke and wood dust, indicating that less exposure is needed for women to develop exposure-related illnesses.

Perhaps the most surprising finding in this study is the high-level of impact observed to overall respiratory function in women. Researchers summarized that the extent of measured damage for women who cleaned was equivalent to smoking a pack of cigarettes every day for twenty years.
It’s important to note that most of the persons cleaning at home had never smoked or had smoked less “pack-years” (determined by length-of-time and number of packs-per-day) than the other two exposure groups (“not cleaning” and “occupational cleaning”).
In this sense, men were less immune: men who cleaned at home had more doctor-diagnosed asthma than men in the other two groups.

And what about the cleaning chemicals at the root of this damage? According to researchers, “Cleaning agents have known irritative effects and potential for causing inflammatory changes in the airways.” This appears to be especially true for women.
The mode of chemical cleaner – be it spray or other liquid – was not statistically relevant, only that a chemical cleaner was used. Consider next that many people use multiple cleaning and freshening products in the course of a thorough housecleaning.
Windex for glass, Easy-Off for the oven, an antibacterial or bleach-spray for the counters, and let’s not forget the always-emitting, toxic air fresheners that keep the house smelling perpetually “clean”. We even wrap ourselves in chemical residues, thanks to toxic detergents and fabric softeners that are the standard operating procedure in most households.

There are hundreds, maybe thousands of toxic threats lurking in our homes and workplaces, and most of us are blind to these ongoing micro-exposures. As this gripping research into housecleaning shows, even the most common, mundane task can conceal hidden dangers.
Women who cleaned with chemicals at least once per week had markedly decreased lung capacity after twenty years. It’s time to acknowledge that the threat of these chemicals is real and can lead to serious consequences for long-term health.

The good news is that natural alternatives are now easily accessible, even within mainstream channels. And not only are they far safer, they often contain botanical extracts that are more effective against chemical and antibiotic-resistant strains of bacteria than conventional cleaning formulations.