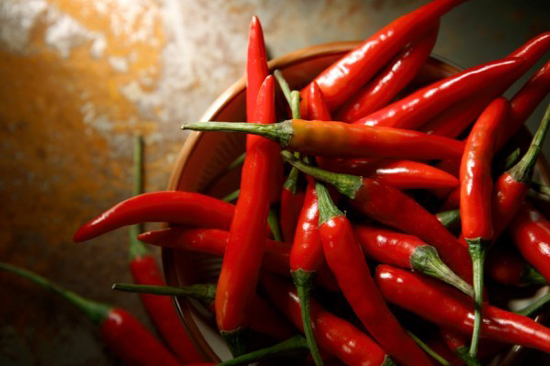 Capsaicin, an active ingredient that gives chilies and peppers their pungent taste, was shown to inhibit the growth of breast cancer cells, a study found. To assess this, German researchers at the Ruhr-Universität Bochum and their colleagues used the SUM149PT cell culture, which serves as a model for highly aggressive forms of breast cancer such as the triple-negative type. The researchers then identified a transient receptor potential channel and named it TRPV1. The receptor, which appeared to be activated by the spicy compound, was found in tumor cells in various samples from breast cancer patients.

The researchers then used capsaicin to activate the TRPV1 receptor in cell cultures. The pungent compound was added to the cell cultures with varying time frames of several hours of days. Data showed that the treatment caused cancer cells to divide at a slower pace. The therapy was also associated with a higher number of deaths among tumor cells. The remaining cancer cells became more sluggish, which implied that the treatment was able to inhibit their ability to form metastases in the body.

“In this study, we aimed to identify the TRP channels in different breast cancer subtypes and to investigate the effect of TRPV1 ligand (capsaicin) on breast cancer progression. To our knowledge, no studies have yet conducted a large-scale comparative study of the TRP channels expression profiles in breast cancer cell lines. In our experiments, a significant reduction in cell proliferation after capsaicin stimulation was observed. This finding was in accordance with the results of other scientists, who demonstrated a significant decrease in the cell growth rate of MCF-7 breast cancer cells upon capsaicin stimulation” said researcher Dr. Lea Weber.

“If we could switch on the TRPV1 receptor with specific drugs, this might constitute a new treatment approach for this type of cancer,” told reasearcher Dr. Habil Hanns Hatt.

The findings were published in the journal Breast Cancer – Targets and Therapy.

The results of the current study reflect those of a meta-analysis published in the International Journal of Cancer Research and Treatment. According to the review, capsaicin showed strong anticancer properties by targeting multiple signaling pathways and disease-related genes in various stages of tumors such as initiation, promotion, progression and metastasis. The compound was also shown to promote apoptosis – otherwise known as cell death – in cancer cells, inhibit cancer cell growth and prevent metastasis, the analysis stated. Furthermore, the compound interacts well with other anticancer treatments. This mechanism demonstrated capsaicin’s potential in cancer treatment as an add-on to other chemotherapeutic compounds, researchers wrote.

Various animal studies have also demonstrated the compound’s efficacy in fighting cancer cells. A 2006 study in the journal Cancer Research found that the compound specifically targeted prostate cancer cells and tumors without harming healthy cells in albino rats. Researchers said capsaicin triggered cell death among cancer cell lines and related hormones. The compound was also shown to help reduce the expression of prostate-specific antigens, and prohibit dihydrotestosterone from activating the PSA, data showed. The animals also showed significant declines in prostate cancer growth and size following a four-week treatment with capsaicin. The findings were published in the journal Cancer Research.

A study by the American Chemical Society also found that combining capsaicin with the compound 6-gingerol in ginger may help keep lung cancer at bay. Researchers examined lab mice predisposed to lung cancer and found that only 20% of the animals that received the combination treatment developed the disease at the end of the study. The results were published in the Journal of Agricultural and Food Chemistry.