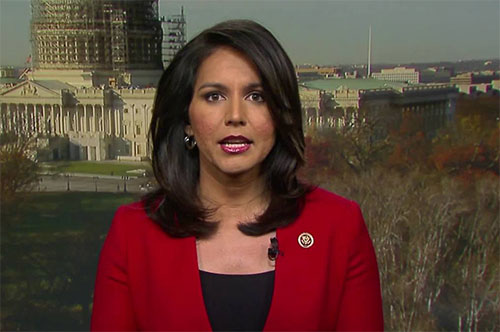 Congresswoman Tulsi Gabbard told Tucker Carlson on Fox, in July 2017, that President Trump is repeating the mistakes made by George W. Bush and the only winners in the Syrian war will be ISIS.
Describing Trump’s actions as “an illegal and unconstitutional military strike against a foreign government”, Tulsi Gabbard explained that by destabilizing the secular Assad government U.S. have “strengthened these terrorist groups operating on the ground in Syria, like Al-Qaeda, Al-Nusra, ISIS and others, whose sole goal is to overthrow the Syrian government and take over.”

If there is anyone we should listen to about Syria, it’s Hawaii Rep. Tulsi Gabbard. She went to Syria in January 2017 on a secret fact-finding mission to wade through the lies and propaganda and find out what is really happening on the ground.
When she returned she went on CNN and blew their minds by telling them she had proof the Obama administration was supporting ISIS and Al-Qaeda in Syria.
Trump may not be aware of the full consequences of his actions, but the fact is his military strikes are furthering Obama’s covert support of these terrorist organizations. The fact that Hillary Clinton emerged from her post-election hibernation to cheerlead for Trump’s military action should tell you everything you need to know.

Tucker Carlson asked Gabbard if she believed that Assad attacked his own people with chemical weapons.
“What I believe doesn’t matter, what matters is evidence is facts. If the Trump administration has the evidence unequivocally proving this, then share it with the American people, share it with Congress, come to Congress and make your case before launching an unauthorized, illegal military strike against a foreign government.” 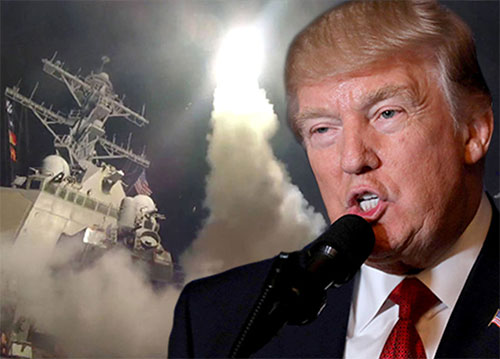 Tulsi Gabbard took to Facebook page to explain her position further:
“In the lead up to the Iraq War in 2003, both the American people and our Congress were lied to by the Bush administration. As they sought to go to war in Iraq, they brought ‘evidence’ that they said proved Saddam Hussein had WMDs and therefore the US and the UN should go in and topple him.
We all know now that this was false.

Now this destructive war in Syria, like in Iraq, is aimed at the same outcome of regime change that left Iraq in tatters. Hundreds of thousands of civilians have died, and millions have been displaced from their homes. The cost of war is profound.

I’m opposed to the escalation of the counterproductive regime change war in Syria because it will lead to the deaths of more innocent men, women and children.

Terrorist groups like al-Qaeda and ISIS, the strongest forces on the ground in Syria, will continue to increase their strength and influence over the region in the vacuum of a central government. And if the Syrian government is overthrown, the terrorists will take over all of Syria and the death and human suffering will be unimaginable.
We must not repeat the mistakes of Iraq and Libya.

The Trump Administration must make their case to Congress and the American people as to why we should go to war with Syria before launching unauthorized illegal military strikes against a foreign government.”