The black-or-white extremism of conventional medicine needs to be redacted in favor of a more nuanced view of oncogenesis – one where cancer represents a spectrum of deviation from the norm, where carcinogenesis is an adaptive response to a radically divergent environment from the one in which we evolved. 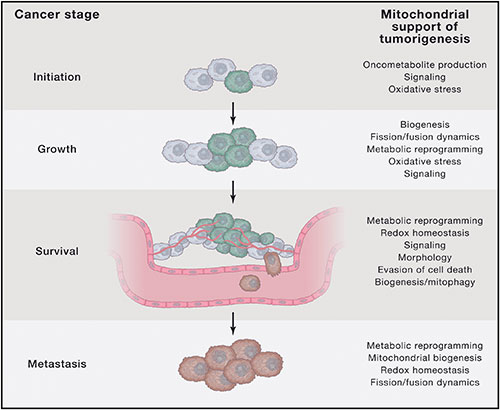 Instead of a cell gone rogue, where cancer is caused by the accumulation of point mutations in genes controlling the cell cycle and proliferation, cancer represents a reincarnation of a more ancient survival mechanism whereby cells coordinate their behavior to survive in an increasingly harsh cellular milieu. In this view, cancer represents a regression to a pre-programmed ancestral time, before the evolution of complex, highly differentiated eukaryotic organisms, where the hostile environment would have selected for traits favoring cellular immortalization, or resistance to apoptosis, as a primitive form of survival mode emphasizing replication, self-repair, and metastasis. In particular, the bio-energetic and metabolic theories of carcinogenesis, advanced by the luminaries Dr. Michael Gonzalez, Dr. Dominic D’Agostino, Dr. Garth Nicolson, and Dr. Thomas Seyfried, are perfectly situated to explain the role of mitochondria, our energetic cellular powerhouses, in cancer.

Mitochondria: The Conductors of the Physiological Orchestra

Mitochondria are rod-shaped, double-membrane organelles responsible for production of adenosine triphosphate (ATP), the cellular energy currency that powers metabolic reactions. In addition to transforming organic material into ATP, mitochondria are intimately involved in heme, amino acid, lipid, and steroid synthesis, in optimal functioning of the energetically demanding immune and nervous systems, and in dictating cell fates. Mitochondria mediate cellular proliferation, and regulate the energetically intensive process of apoptosis, or cell suicide, via release of cytochrome C. through the mitochondrial permeability transition pore (mtPTP).

Apoptosis, or the coordinated collapse of the cell, is accompanied by energy-dependent signaling cascades that result in predictable morphological changes, cellular dismantling, and engulfment of the cellular corpses by neighboring phagocytes. Although aberrant apoptosis is implicated in disease pathophysiology, apoptosis is essential to development and homeostasis. In contrast, necrosis occurs secondary to cellular injury, and results in cellular swelling, membrane fracture, and complement-mediated lysis, causing release of intracellular components and consequent inflammation. Mitochondrial function is so inextricably tied to apoptosis that tissue necrosis is one of the clinical features of mitochondrial diseases, such that extensive tissue damage can be incurred.

Via their production of reactive oxygen species (ROS) as metabolic byproducts, mitochondria also regulate the cellular redox state. Although often vilified for perpetuating the inflammatory molecular mechanisms underlying the pathogenesis of disease, elevated levels of ROS also serve adaptive and hormetic roles as signaling molecules in redox biology for maintenance of homeostasis. In fact, it is theorized that ROS evolved as a signal transduction mechanism to activate transcription factors that enable adaptation to changes in accessibility of environmental nutrients and in the oxidative environment.

Although somatic cells can contain anywhere from two hundred to two thousand mitochondria, energy requirements dictate how many mitochondria each cell contains. The most metabolically active cells, such as those within the brain, liver, skeletal muscle, and cardiac muscle, contain the largest number of mitochondria, whereas mature erythrocytes, or red blood cells, are the only cells devoid of mitochondria. 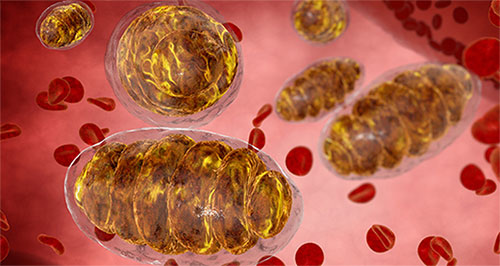 The Evolutionary Origins of Mitochondria

The inner mitochondrial membrane contains the metabolic machinery for aerobic metabolism, an evolutionary adaptation to oxygen-rich environments, which coincided with the endosymbiosis, or engulfment, of the ancient autotrophic bacteria that were the predecessors of these eukaryotic organelles. One to three billion years ago, aerobic bacteria colonized an ancient prokaryote, generating energy for the host cell in return for shelter and a reliable supply of food, which was the genesis of intracellular mitochondria.

Mitochondria produce over ninety percent of cellular energy via oxidative phosphorylation, a process that couples glucose oxidation to an electron transport chain and to the flow of protons down a gradient, which results in ATP synthesis via a rotary engine of the cell called ATP synthetase. Pyruvate, a downstream product of cytosol-based glycolysis, along with fatty acids, are imported into the mitochondria and processed via the tricarboxylic acid (TCA) or citric acid cycle into high-energy reduced coenzymes, nicotinamide adenine dinucleotide (NADH) and flavin adenine dinucleotide (FADH2), which consequently donate electrons into the electron transport chain (ETC) in the production of ATP. Electrons are successively passed down an electrochemical gradient to the final electron acceptor, diatomic oxygen (O2), via a chain of respiratory proton pumps embedded in the inner mitochondrial membrane, which is why humans need oxygen to survive.

The fact that mitochondria have distinct, bacteria-like circular genomes that are functionally and structurally disparate from the chromosomal assemblies residing in the nucleus supports the endosymbiosis hypothesis. Because most of the mitochondrial genome is scattered throughout chromosomal DNA, the mitochondria is referred to as a semi-autonomous organelle, as it relies on communication with the nucleus for expression of all its enzyme complexes and molecular constituents. Mitochondria, which are inherited in maternal fashion, “divide by binary fission and propagate distinct ‘lineages’ within each cell”. However, unlike nuclear DNA, mitochondrial DNA (mtDNA) lacks protective histones, and hence is particularly susceptible to DNA damage from free radicals.

Cancer As A Pre-Symbiotic, Primordial State 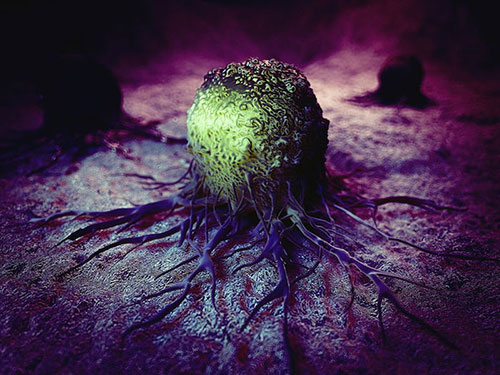 Emerging data, which considers malignancy through an ecological lens, recognizes cancer not as a predetermined genetic time bomb due to defective genes, but rather as an evolutionary throwback to a time where more rudimentary cooperation between free-floating cells existed, which allowed their survival in nutrient depleted, increasingly uninhabitable environments. This view is articulated by Davies and Lineweaver (2011), who state: “We hypothesize that cancer is an atavistic condition that occurs when genetic or epigenetic malfunction unlocks an ancient ‘toolkit’ of pre-existing adaptations, re-establishing the dominance of an earlier layer of genes that controlled loose-knit colonies of only partially differentiated cells, similar to tumors”.

This is similarly articulated by Davila and Zamorano (2013), who discuss how “Some of the hallmarks of cancer such as uncontrolled cell proliferation, lack of apoptosis, hypoxia, fermentative metabolism and free cell motility (metastasis) are akin to a prokaryotic lifestyle, suggesting a link between cancer disease and evolution”. They note that cancer represents a phenotypic reversion to the most preliminary stage of eukaryotic evolution, that of a heterotrophic, facultative anaerobe that is suited for survival and replication in oxygen-poor, hypoxic environments. The authors state that this occurs due to cumulative oxidative damage to both maternally inherited mtDNA and nuclear DNA and to mitochondrial insufficiency, or uncoupling between electron transfer and chemiosmotic ATP synthesis.

In particular, the bioenergetic theory of carcinogenesis proposed by Gonzalez and colleagues proposes that the replacement of oxygen-dependent aerobic respiration by aerobic glycolysis and lactic-acid producing fermentation, phenomena first characterized in cancer cells over ninety years ago by Nobel Laureate Otto Warburg, favors carcinogenesis. In the hypoxic micro-environment in which cancer develops, a metabolic transition from obligate anaerobe to partial anaerobe, accompanied by enhanced glycolytic flux, takes place, which ensures survival in oxygen-poor conditions.

The switch from mitochondrial-based glucose oxidation to cytosol-based aerobic glycolysis, or glycolysis in the presence of oxygen, is why positron emission tomography (PET) scans can be used to localize tumors and metastases, since the labeled glucose gravitates towards malignant tissue with a high rate of glycolysis. The propensity of tumor cells for increased glycolytic flux also confers resistance to apoptosis, or programmed cell death, which allows cancer cells to evade cell suicide signals. Without electron flow down the ETC, mitochondria also lack the energy for depolarization and synthesis of reactive oxygen species (ROS), which are crucial redox signals required for apoptosis.


Read the second part of the article.