Mass media is the most powerful tool used by the ruling class to manipulate the masses. It shapes and molds opinions and attitudes and defines what is normal and acceptable. This article looks at the workings of mass media through the theories of its major thinkers, its power structure and the techniques it uses, in order to understand its true role in society.

“Publicity is the deliberate attempt to manage the public’s perception of a subject. The subjects of publicity include people (for example, politicians and performing artists), goods and services, organizations of all kinds, and works of art or entertainment.” 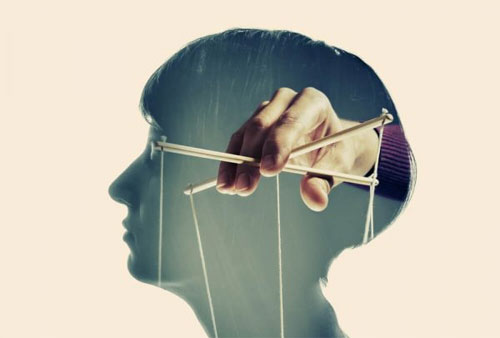 The drive to sell products and ideas to the masses has led to an unprecedented amount of research on human behavior and on the human psyche. Cognitive sciences, psychology, sociology, semiotics, linguistics and other related fields were and still are extensively researched through well-funded studies.

“No group of sociologists can approximate the ad teams in the gathering and processing of exploitable social data. The ad teams have billions to spend annually on research and testing of reactions, and their products are magnificent accumulations of material about the shared experience and feelings of the entire community.” – Marshal McLuhan, The Extensions of Man.

The results of those studies are applied to advertisements, movies, music videos and other media in order to make them as influential as possible. The art of marketing is highly calculated and scientific because it must reach both the individual and the collective consciousness. In high-budget cultural products, a video is never “just a video,” Images, symbols and meanings are strategically placed in order to generate a desired effect.

“It is with knowledge of the human being, his tendencies, his desires, his needs, his psychic mechanisms, his automatisms as well as knowledge of social psychology and analytical psychology that propaganda refines its techniques.” – Propagandes, Jacques Ellul (free translation).

Today’s propaganda almost never uses rational or logical arguments. It directly taps into a human’s most primal needs and instincts in order to generate an emotional and irrational response. If we always thought rationally, we probably wouldn’t buy 50% of what we own. Babies and children are constantly found in advertisements targeting women for a specific reason: studies have shown that images of children trigger in women an instinctual need to nurture, to care and to protect, ultimately leading to a sympathetic bias towards the advertisement. 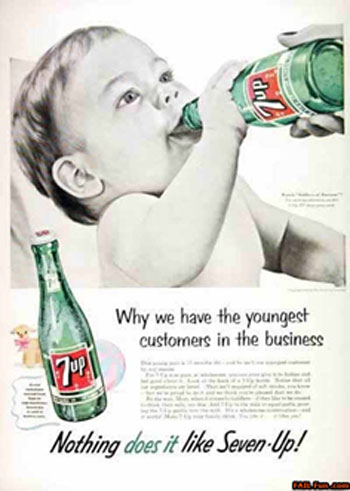 Strange old 7up ad using the cuteness of babies

Sex is ubiquitous in mass media, as it draws and keeps the viewer’s attention. It directly connects to our animal need to breed and to reproduce, and, when triggered, this instinct can instantly overshadow any other rational thoughts in our brain.

What if the messages described above were able to reach directly the viewers’ subconscious, without the viewers even realizing what is happening? That is the goal of subliminal perception. The phrase subliminal advertising was coined in 1957 by the US market researcher James Vicary, who said he could get moviegoers to “drink Coca-Cola” and “eat popcorn” by flashing those messages onscreen for such a short time that viewers were unaware.

“Subliminal perception is a deliberate process created by communications technicians, by which you receive and respond to information and instructions without being consciously aware of the instructions.” – Steve Jacobson, Mind Control in the United States.

This technique is often used in marketing and we all know that sex sells. 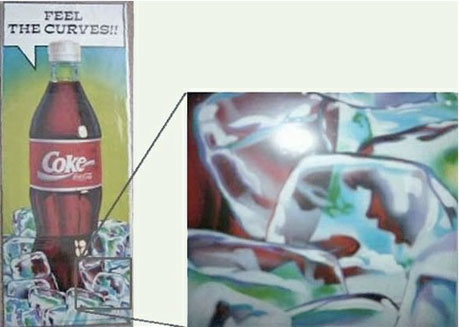 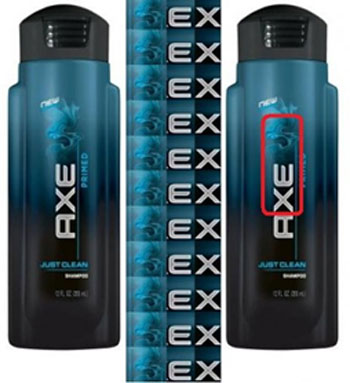 Although some sources claim that subliminal advertising is ineffective or even an urban myth, the documented usage of this technique in mass media proves that creators believe in its powers. Recent studies have also proven its effectiveness, especially when the message is negative.

“A team from University College London, funded by the Wellcome Trust, found that it [subliminal perception] was particularly good at instilling negative thoughts. There has been much speculation about whether people can process emotional information unconsciously, for example pictures, faces and words,” said Professor Nilli Lavie, who led the research. “We have shown that people can perceive the emotional value of subliminal messages and have demonstrated conclusively that people are much more attuned to negative words.”

A famous example of subliminal messaging in political communications is in George Bush’s advertisement against Al Gore in 2000. Right after the name of Gore is mentioned, the ending of the word “bureaucrats” – “rats” – flashes on the screen for a split second. 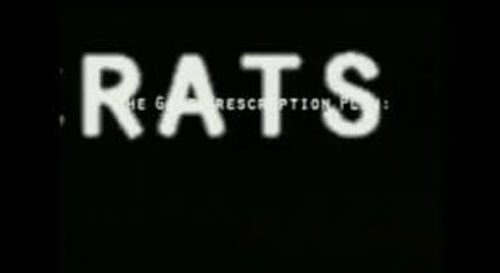 The discovery of this trickery caused quite a stir and, even if there are no laws against subliminal messaging in the U.S., the advertisement was taken off the air.

As seen in many articles, subliminal and semi-subliminal messages are often used in movies and music videos to communicate messages and ideas to the viewers.

In the past, when changes were imposed on populations, they would take to the streets, protest and even riot. The main reason for this clash was due to the fact that the change was clearly announced by the rulers and understood by the population. It was sudden and its effects could clearly be analyzed and evaluated.

Today, when the elite needs a part of its agenda to be accepted by the public, it is done through desensitization. The agenda, which might go against the public best interests, is slowly, gradually and repetitively introduced to the world through movies (by involving it within the plot), music videos (who make it “cool” and “sexy”) or the news (who present it as a solution to today’s problems). After several years of exposing the masses to a particular agenda, the elite openly presents the concept to the world and, due to mental programming, it is greeted with general indifference and is passively accepted. This technique originates from psychotherapy.

“The techniques of psychotherapy, widely practiced and accepted as a means of curing psychological disorders, are also methods of controlling people. They can be used systematically to influence attitudes and behavior. Systematic desensitization is a method used to dissolve anxiety so the patient (public) is no longer troubled by a specific fear, a fear of violence for example. […] People adapt to frightening situations if they are exposed to them enough.”– Steven Jacobson, Mind Control in the United States.

Predictive programming is often found in the science fiction genre. It presents a specific image of the future – the one that is desired by the elite – and ultimately becomes in the minds of men an inevitability. A decade ago, the public was being desensitized to war against the Arab world. Today, the population is gradually being exposed to the existence of consciousness control, of transhumanism and of an Illuminati elite. Emerging from the shadows, those concepts are now everywhere in popular culture. This is what Alice Bailey describes as the “externalization of the hierarchy”: the hidden rulers slowly revealing themselves. 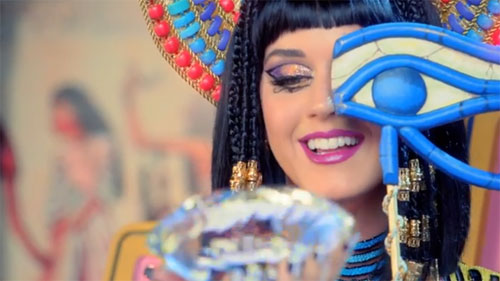 Contrarily to the information presented above, documentation on occult symbolism is rather hard to find. This should not come as a surprise as the term “occult”, literally means “hidden”. It also means “reserved to those in the know” as it is only communicated to those who are deemed worthy of the knowledge. It is not taught in schools nor is it discussed in the media. It is thus considered marginal or even ridiculous by the general population.

Occult knowledge is not, however, considered ridiculous in occult circles. It is considered timeless and sacred. There is a long tradition of hermetic and occult knowledge being taught through secret societies originating from ancient Egyptians, to Eastern Mystics. Even if the nature and the depth of this knowledge was most probably modified and altered throughout the centuries, mystery schools kept their main features, which are highly symbolic, ritualistic and metaphysical.

Those characteristics, which were an intricate part of ancient civilizations, have totally been evacuated from modern society to be replaced by pragmatic materialism. For this reason, there lies an important gap of understanding between the pragmatic average person and the ritualistic establishment.

“If this inner doctrine were always concealed from the masses, for whom a simpler code had been devised, is it not highly probable that the exponents of every aspect of modern civilization – philosophic, ethical, religious, and scientific-are ignorant of the true meaning of the very theories and tenets on which their beliefs are founded? Do the arts and sciences that the race has inherited from older nations conceal beneath their fair exterior a mystery so great that only the most illumined intellect can grasp its import? Such is undoubtedly the case.” – Manly P. Hall, Secret Teachings of All Ages.

The “simpler code” devised for the masses used to be organized religions. It is now becoming the Temple of the Mass Media and it preaches on a daily basis extreme materialism, spiritual vacuosity and a self-centered, individualistic existence. This is exactly the opposite of the attributes required to become a truly free person, as taught by all great philosophical schools of thought. Is a dumbed-down population easier to deceive and to manipulate?

“These blind slaves are told they are ‘free’ and ‘highly educated’ even as they march behind signs that would cause any medieval peasant to run screaming away from them in panic-stricken terror. The symbols that modern man embraces with the naive trust of an infant would be tantamount to billboards reading, ‘This way to your death and enslavement,’ to the understanding of the traditional peasant of antiquity.” – Michael A. Hoffman II, Secret Societies and Psychological Warfare.

This article examined the major thinkers in the field of mass media, the media power structure and the techniques used to manipulate the masses. We believe this information is vital to the understanding of the “why” in many of the topics discussed on this website. The “mass population” versus “ruling class” dichotomy described in many articles is not a “conspiracy theory”, but a reality that has been clearly stated in the works of some of the 20th century’s most influential men.

Lippmann, Bernays and Lasswell have all declared that the public are not fit to decide their own fate, which is the inherent goal of democracy. Instead, they called for a cryptocracy, a hidden government, a ruling class in charge of the “bewildered herd.” As their ideas continue to be applied to society, it is increasingly apparent that an ignorant population is not an obstacle that the rulers must deal with. It is something that is desirable by them and, indeed, necessary, to insure total leadership.

An ignorant population does not know its rights, does not seek a greater understanding of issues and does not question authorities. It simply follows trends. Popular culture caters to and nurtures ignorance by continually serving up brain-numbing entertainment and spotlighting degenerate celebrities to be idolized. Many people ask: “Is there a way to stop this?” Yes, there is. Start by stopping to buy their crap and reading a book instead.

“If a nation expects to be ignorant and free, it expects what never was and never will be.” – Thomas Jefferson.