David and Goliath 2018: How One Man Accelerated the Collapse of the British American Empire (1) 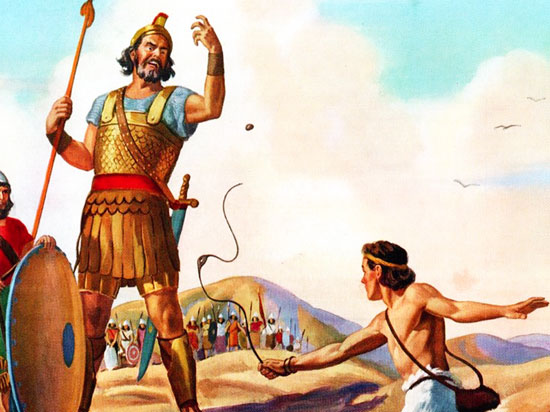 Every once in a long while, the whole world is treated to a replay of the biblical David and Goliath story.
The second decade of the Third Millennium is just such a time. The location of this rapidly unfolding high drama happens to be roughly the same location as the first casting of David and Goliath – the Levant. However, there is one very significant difference in the latest re-enactment of this End-Time blockbuster – David has a female companion who is helping take down Goliath, once and for all. Not only that, David’s helpmate in 2018 is a quite beautiful, English-speaking, Sunni Muslim woman who was born and raised in London by Syrian parents.

Bashar and Asma Al-Assad, President and First Lady of Syria

If ever there was a power couple in the post-modern era, who not derived their power from the Rothschild banking cartel, Syrian President Bashar al-Assad and First Lady Asma Al-Assad are it.

As a modern-day David, Bashar al-Assad has gone up against Goliath which has taken the form of the Zio-Anglo-American Axis (ZAAA).

There’s an old yet highly relevant adage that says: “Behind every great man is a great woman”. The marriage between Bashar and Asma al-Assad is a good example of this truism. The First Lady has weathered horrendous storms, both personal and political, that no presidential wife in the Middle East has ever experienced. Her story is one of simply supporting her David, no matter what the cost, no matter what the sacrifice.

What follows is the well-hidden back story regarding the First Lady of Syria, Asma Al-Assad, that will never be published by the mainstream media. To read this accurate and untold account of her extraordinary journey through the apocalyptic Mideast battleground will quickly reveal her tremendous courage, intestinal fortitude and remarkable heroism.

But the satanic Elites try to eliminate all those who oppose their plans.  It’s the very same reason that the Empire eliminated John F. Kennedy, Robert F. Kennedy, Martin Luther King Jr., Malcolm X and many of heroic personages of the 20th century.
Because they’re afraid of them! Deathly afraid, as a matter of historical fact.

This is why there are no more homegrown heroes in America, the military arm of the New World Order.

Nota bene: The article posted below lays bare what even the alternative media will not publish. Really, why is even the truth-telling Fifth Estate so reluctant to disseminate a factual account about the accomplishments of the Assad family? If alternative news websites do post anything of merit about them, the news report or commentary is always qualified with disclaimers about how they don’t support President Assad’s so-called “brutal dictatorship”… as they rightly defend his innocence concerning the latest false flag attack perpetrated by the U.S.-led military alliance (which includes ISIS, Al-Nusra Front and other Al-Qaeda terrorist splinter groups). 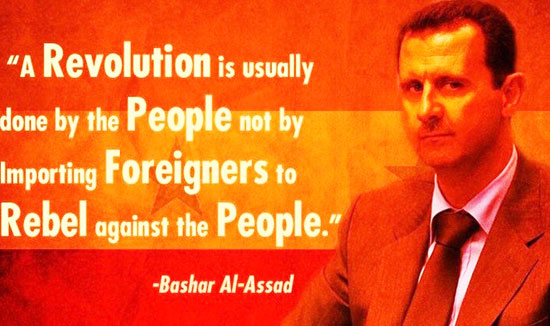 Any head of state who tells the truth like President Bashar al-Assad is likely to be denounced before their country is invaded.

Syrian President Predictably Demonized By All The Usual Suspects

Just how reviled is President Bashar al-Assad by the Western powers who maniacally push for regime change in Syria?
So reviled that the U.S. Intelligence Community has been disseminating the utterly absurd and obviously false accusation that “Assad created ISIS”.
Can the CIA-instigated whisper campaign get any more repugnant and ridiculous than that?

The Assad government has a well-established history of treating the Syrian people well. To hear the Syrians tell their story, Bashar al-Assad is nothing short of a living saint. In fact, the effusive adulations of his presidency are as common as the accolades from those who know him personally.
Al-Assad’s wife Asma – who was once called “A Rose in the Desert” – is equally lauded for her noble leadership and virtuous qualities. She is not only the beloved wife of Assad, she’s also considered the mother of the Syrian people. This revealing article was written about her just before the Arab Spring was carried out by the Zio-Anglo-American Axis.

President Assad has been elected president 3 times since he first took office in 2000. The most recent election was held in 2014 where he again won by a landslide vote of 88.7% (See graphic below). 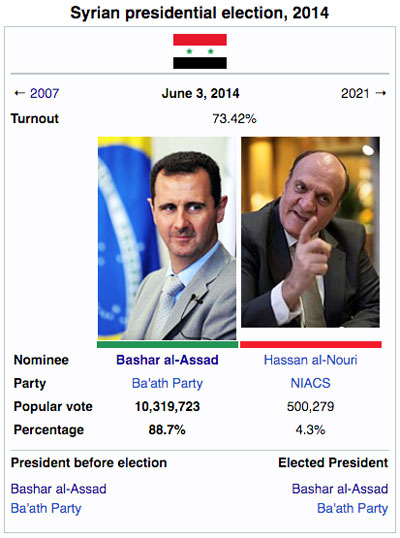 Prior to that election, Assad won two back-to-back referendums by extraordinary demonstrations of support.

On 10 July 2000, Assad was elected as President, succeeding his father, who died in office a month prior. In the 2000 and subsequent 2007 election, he received 99.7% and 97.6% support, respectively, in uncontested referendums on his leadership.
These indisputable historical facts speak for themselves.
Assad was never a “tyrant” or a “butcher” or a “despot” as labelled by the crazed leadership of the Zio-Anglo-American Axis. In reality, he was quite the opposite.
This inconvenient fact of Middle Eastern life is why the mainstream media organs of propaganda have had to work so hard to smear him. They know that they must spew as much falsehood as necessary in an attempt to completely destroy his reputation and ruin his legacy.

In light of the fact that Assad has always been elected by overwhelming majorities, it’s evident that the seditious Syrian opposition was bought and bribed by foreign entities such as the C.I.A., MI6 and MOSSAD. It’s also apparent that the Syrian rebels were actually Wahhabi extremists recruited in Saudi Arabia and Al-Qaeda terrorists bussed in from everywhere else who were paid by KOS sheiks.

The Neocon Zionists have demonized Assad nonstop in order to stage a transparently fake Civil War. Only in this way could the perpetrators get away with overthrowing his government by transporting thousands of paid terrorists and mercenaries into Syria. This CIA-directed color revolution was just another George Soros-incited regime change approved by Barack Obama and carried out by the U.S. Intelligence Community and Hillary Clinton’s State Department.

The real back story to the US-manufactured Syrian War is the very reason why Emailgate blew up and was never properly investigated or prosecuted. How could they possibly “Lock Her Up”; they would have to take down the whole bloody system at the same time. This massive and monolithic criminal conspiracy coordinated by the Obama administration is the single biggest story on the planet today. Just how big?
Emailgate, Servergate, Benghazigate, Syriagate, Libyagate, ISISgate and Clinton Foundationgate all intersect to expose a massive and unparalleled conspiracy of criminality and corruption in the U.S. Federal Government.

Emailgate is not only about the lawlessness of the entire Obama Administration, it’s also about the creation of the Islamic State, the funding if ISIL and the arming of ISIS.
Nevertheless, even with the Zionist smear campaign running 24/7 for nearly seven years, the mendacious vilifiers have only made a minor dent in Assad’s chivalrous armor. It seems that his own people only believe what they have experienced from his leadership. As a result, the shameless Zionists have resorted to intensifying his vilification, even at the risk of sounding (and appearing) completely insane. 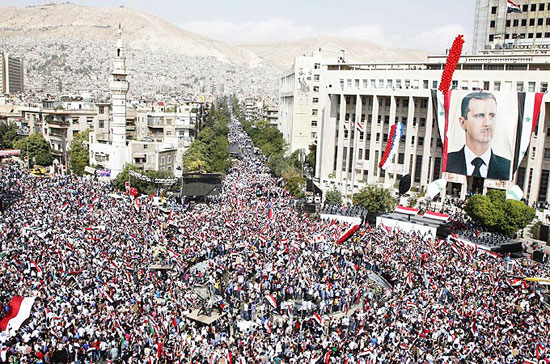 “The revolution is dead. It was sold” said Mohammad al-Daher, a commander in the rebels’ Western-backed Free Syrian Army. “People used to assume that Assad will be gone, no question. But I wouldn’t be surprised if the end result of these negotiations is that he remains as president and beyond that, turns into a national hero who saved his country”.

Clearly, President Bashar al-Assad has bravely stood up to the West.
What’s his secret? How he has successfully weathered the military invasions and personal assaults for so many years?

However, there are very specific reasons why Assad has made it this far and turned a certain defeat into an inconceivable victory. The following narrative reveals the four primary pillars of support which uphold his temple of inner strength and unshakable resolve.