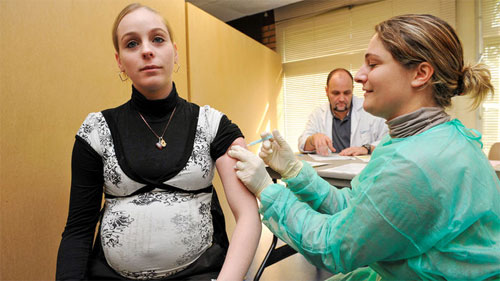 The mainstream media is doing their best to minimize a devastating study showing a high correlation (7.7-fold) between flu vaccines and miscarriages. A review of the scientific literature shows a body of evidence that supports the new study’s conclusions. Why can’t we all just deal with the facts?

Lena Sun, reporter for the Washington Post, had an unenviable task: cover a study implicating the flu vaccine in spontaneous abortions (aka, miscarriages). The study, released in the highly respected and prestigious journal Vaccine, has a title that will likely increase the stress level of pregnant women trying to figure out how to keep their baby safe: Association of spontaneous abortion with receipt of inactivated influenza vaccine containing H1N1 pdm09 in 2010–11 and 2011–12.

Like all good journalists working in the mainstream media, Ms. Sun’s challenge was to report on a potentially catastrophic study that might hurt the primary source of advertising revenue for her employer: the pharmaceutical industry. And while we’ve seen a number of different ways for reporters to try and minimize the implications of damaging studies, Ms. Sun’s headline may just take the cake: 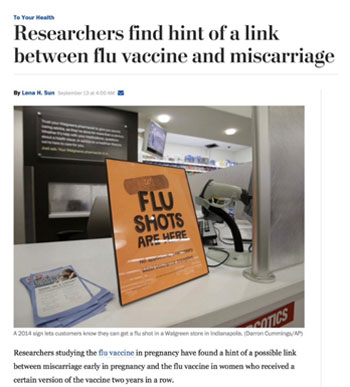 For those of you not steeped in the jargon of statistics or epidemiology, you’re going to have to take our word for it that “hint” is not a statistical term, nor does “hint” in any way provide a specific assessment of risk. “Hint” is more like a word that you hope might keep people from reading your article. (Imagine saying McDonald’s hamburgers provide a “hint” of spontaneous death or riding a rollercoaster provides a “hint” of lifelong paralysis…)

Despite Ms. Sun’s choice to minimize the significance of the study, the actual conclusions by the study authors were deeply troubling. In a nutshell, what the authors found is that women who had received an H1N1 flu shot in the 2010–11 season and who then received a normal flu vaccine in the 2011–12 season were dramatically more likely to have a spontaneous abortion. How much more likely? Here’s what the study says: “Among women who received pH1N1-containing vaccine in the previous influenza season, the aOR in the 1–28 days was 7.7 (95% CI 2.2–27.3); the aOR was 1.3 (95% CI 0.7–2.7) among women not vaccinated in the previous season.”

(Author’s note: soon after this article was published, the headline of Ms. Sun’s article was changed to remove the word “hint”, although she is still using the word to describe the 7-fold relationship researchers found within the article itself.)

For those of you who need to brush up on your statistics (pretty much all of us), an odds ratio is “a measure of association between an exposure and an outcome. The OR represents the odds that an outcome will occur given a particular exposure, compared to the odds of the outcome occurring in the absence of that exposure.” In plain English, an odds ratio greater than 1 would tend to imply that two things are in fact linked (like tobacco use and lung cancer). What was the odds ratio for spontaneous abortion for women who had received an H1N1 shot in 2010–2011 and then a flu vaccine in 2011–12?

The study says 7.7 – for those of you counting at home, that’s not a “hint”, that’s a giant disturbing alarm (which is why the damage control is being rolled out en masse today). Women who had received the two flu shots in successive seasons were almost 8 times more likely to have a spontaneous abortion than those who had not  –  a nearly 700% increase.

Ms. Sun compounds her minimization of a very serious conclusion by then saying something that’s simply not true: “The findings suggest an association, not a causal link, and the research is too weak and preliminary, experts said, to change the advice, which is based on a multitude of previous studies, that pregnant women should get a flu vaccine to protect them from influenza, a deadly disease that may cause serious birth defects and miscarriage.”

It’s always ridiculous when reading things from reporters that say “multitude of previous studies” because it’s pretty easy to verify whether or not that’s true. You see, every vaccine is required to have a package insert, and unlike a Washington Post reporter, the law requires package insert writers to tell the truth, which Sanofi Pasteur (a flu vaccine maker) did when they wrote this package insert for their flu vaccine in 2016: 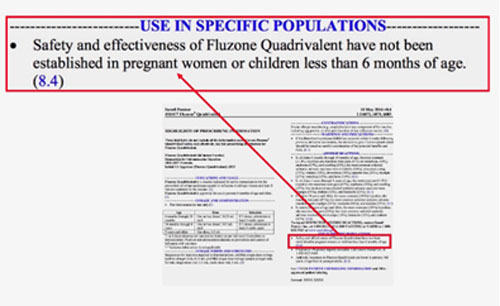 Multitude or zero?
Ms. Sun, in the case of Sanofi’s flu vaccine, routinely given to pregnant women, the sum total of the “multitude” of safety studies done on the vaccine’s safety in pregnant women is ZERO, at least according to the product’s package insert written by the vaccine maker (and is true for every other flu vaccine).

Before jumping into the science on the flu vaccine, we need to mention that this whole issue of what impact getting flu vaccines in successive years does to people’s immune systems (and to an unborn fetus) is not new. In fact, it was actually a giant controversy in Canada just a few years ago.

Not only was there a vaccine mismatch with that dominant strain — H3N2 is responsible for about 90 per cent of all flu deaths, especially among the elderly — but researchers found that people who had been inoculated in previous years actually had a higher risk of coming down with the flu than those who typically didn’t get a shot.

“‘That’s a controversial finding, obviously,’ said Skowronski, who led the study recently published in the journal Clinical Infectious Diseases. ‘But that’s not a reason for us to shy away from addressing it’”, the Canadian article said.

Scientists actually speak up, while CDC says pipe down

Recently, two things happened that are starting to look less like a coincidence and more likely related to this miscarriage-flu shot study:

1. A group of prestigious scientists wrote a withering critique of the opposition they experience when publishing studies that show negative outcomes for vaccines (it’s published in the same journal where the flu shot study is published, Vaccine):

The authors write:
“Recently, the authors of many vaccine safety investigations are being personally criticized rather than the actual science being methodologically assessed and critiqued. Unfortunately, this could result in making vaccine safety science a ‘hazardous occupation’. Critiques should focus on the science and not on the authors and on the scientists that publish reasonably high-quality science suggesting a problem with a given vaccine. These scientists require adequate professional protection so there are not disincentives to publish and to carry out researches in the field. The issues for vaccine safety are not dissimilar to other areas such as medical errors and drug safety.”

2. Meanwhile, the U.S. Centers for Disease Control has issued a gag order on employees talking to the press, from an article in Axios.com:
“The Centers for Disease Control and Prevention is trying to crack down on its employees’ conversations with the press, according to an internal email obtained by Axios. The message  —  sent by public affairs officer Jeffrey Lancashire  —  instructs all CDC employees not to speak to reporters, ‘even for a simple data-related question’.”

What more it said:
“Effective immediately and until further notice, any and all correspondence with any member of the news media, regardless of the nature of the inquiry, must be cleared through CDC’s Atlanta Communications Office. This correspondence includes everything from formal interview requests to the most basic of data requests.”

May the readers draw their own conclusions on these two developments.