The Dawn Of Electromagnetic Propulsion?

Normally, it’s considered by many that these patents are likely just the Navy ensuring that when or if this technology does become available, the U.S. will be able to control it. However, these are not normal times. Thanks to To the Stars Academy (TTSA), the Department of Defense, and the media at large, not only are we now being told that Navy pilots have witnessed aircraft behaving exactly like the craft these patents describe, but some of the pilots’ visual descriptions of those anomalous aircraft even seem to be uncannily similar to the drawings of the aircraft as depicted in Pais’ patents.

One of those patents depicts a curiously and distinctly shaped gravitational wave generator that resembles the Tic Tac-shaped object reported by retired U.S. Navy Commander David Fravor and other Nimitz Carrier Strike Group pilots in encounters that took place in 2004 off the Baja Coast.

Furthermore, in regards to claims that these patents may simply be speculative “math theory,” as the patent examiner called them in one of the rejections, it’s important to remember that scientific and engineering research sometimes reach tipping points in which incremental progress made over decades suddenly culminates in large paradigm shifts that bring the theoretical into the realm of the possible. Massive bursts of associated funding also can really help, of course.

The patents appear to draw upon established theoretical research; included in the Navy’s patent appeals and Pais’ most recent publication are references to decades’ worth of peer-reviewed research in room temperature superconductors and macroscopic quantum effects and even notated copies of several studies related to Pais’ research. In the publication, Pais also thanks Naval Aviation Enterprise CTO Dr. James Sheehy “for the many hours of thought-provoking discussions on the concept at hand.” 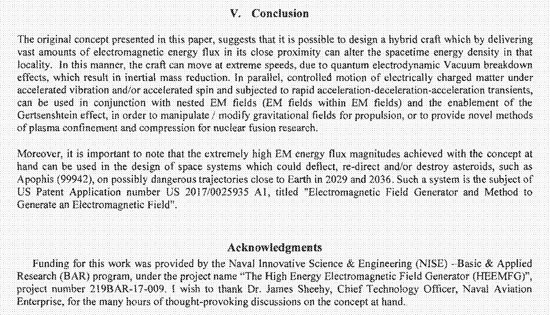 Interestingly enough, both Pais’ research and some of his patents also contain acknowledgments to the work of Dr. Harold E. Puthoff, co-founder and Vice President of Science and Technology of To the Stars Academy. Puthoff is an electrical engineer and inventor who has published research on polarized vacuums, but has also been extensively involved with paranormal and somewhat pseudoscientific topics such as remote viewing.

According to their website, TTSA’s goal is to advance “our current understanding of scientific phenomena and its technological implications.” The stated mission of TTSA’s Aerospace division is to find “revolutionary breakthroughs in propulsion, energy, and communication” and the company claims it is “currently working with lead engineers from major Department of Defense and aerospace companies with the capability to pursue an advanced engineering approach to fundamental aerospace topics,” such as Space-Time Metrics Engineering (STME).

This is a theoretical concept in which quantum vacuums are engineered as a means of propulsion. It remains unclear how TTSA intends to follow through with and secure funding for these ambitious goals.

In a press release marking the official launch of TTSA on Oct. 11, 2017, former Program Director for Advanced Systems at Lockheed Martin Advanced Development Programs at the Skunk Works, Steve Justice, described how TTSA was working on developing revolutionary “Advanced Electromagnetic Vehicles” that will “dramatically reduce the current travel limits of distance and time” and “mimic the capabilities observed in unidentified aerial phenomenon by employing a drive system that alters the space-time metric.”

Without a doubt, these advanced electromagnetic vehicles that TTSA says it plans to develop sound uncannily like the electromagnetic hybrid aerospace underwater craft in Pais’s patent. 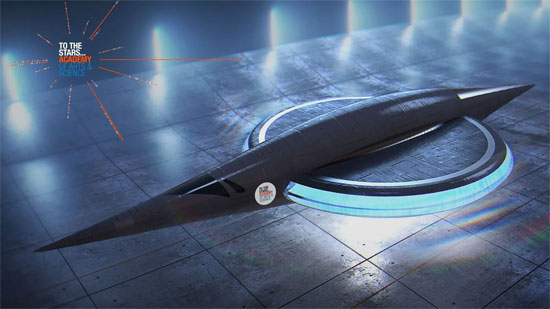 Few Answers, But Plenty Of Questions

The website TheDrive reached out to NAWCAD for any information or clarification regarding these patents and were referred to Kurt Larson, NAWCAD’s Public Affairs Director. Larson informed the editors by phone and email that “when it comes to patent applications, [NAWCAD] cannot provide any context outside of the filed patent application documents.” Similarly, USPTO policy states that applications for patents are not generally open to the public, and “no information concerning them is released except on written authority of the applicant, his or her assignee, or his or her attorney, or when necessary to the conduct of the business of the USPTO.”

As striking as the similarity between the claimed capabilities of the hybrid craft and those of the objects described by Navy personnel, it’s still unknown whether these patents are related to the ongoing UFO revelations. As The War Zone has noted in previous articles, there could be multiple simultaneous explanations for these varied incidents and a number of motivations for disclosing them to the public.

Perhaps the few pieces of footage that have trickled out over the last several years that some claim to show advanced craft could be the Navy’s way of subtly hinting that this concept actually works and is being tested in the field by either the U.S. or the Chinese. The fact that Sheehy would lean so heavily on the Chinese threat in the last bullet point of his appeal letter to the USPTO seems to suggest that the Navy may already be playing catch-up to a terrestrial foe.

It is also important to note that if the Navy had wanted this patent to remain classified, it could have filed the patent under the Invention Secrecy Act of 1951 (35 U.S.C. ch. 17), a law which allows patents to remain classified if they might pose a possible threat to the national security of the United States. Instead, all of Pais’ patents are currently fully available to the public. If such a propulsion technology was so revolutionary and if the Navy indeed wanted to keep this technology out of others’ hands, it’s curious that they would choose to make the patent public. Maybe the Navy is signaling to its adversaries that it, too, is aware of this revolutionary capability and to whom it belongs.

Also, consider the fact that Senators, including the vice chairman of the Senate Intelligence Community, have been briefed at the beginning of this summer by Navy officials about the unexplained sightings Navy pilots have reported.

Even President Donald Trump recently stated in an interview that the Navy UFO reports could be due the fact that pilots “see things a little bit different from the past,” a comment which could be taken to mean that pilots are witnessing new types of aerospace technology for the first time. Trump seemed to indicate that he does not believe the objects reported by Navy pilots are evidence of anything extraterrestrial and took his interviewer’s UFO question in stride without any apparent surprise, an indication of just how far into the mainstream the UFO discussion has become.

Consider as well the comments made by former Senate Majority Leader Harry Reid of Nevada, reportedly a key figure in securing funding for programs like the now-infamous Advanced Aerospace Threat Identification Program and its associated studies.

Earlier this year, Reid stated that the U.S., Russia, and China are currently in a “UFO race.” We know the Chinese have already publicly made major strides in electromagnetic naval capabilities including railguns and aircraft catapults, as well as other highly advanced defense technologies. Could Reid have meant that these three military powers are currently scrambling to be the first to master the technology behind a hybrid aerospace-undersea craft and deploy it on a substantial scale? If so, where does the Navy, and the Pentagon as a whole, currently stand in that clandestine race?
Furthermore, Pais notes in the paper that such a technology “would permit swift movement of the HAUC beyond our Solar System.”

Is this an undisclosed reason why USA suddenly need a Space Force? Is this what Air Force Lieutenant General Vera Linn Jamieson was referring to last year when she casually dropped during an unrelated interview that in “different galaxies in the future we’re going to actually have capability that we have right now in the air”?

And this is hardly the only highly peculiar thing that Air Force leadership has spouted off about in regards to the future of America’s military footprint in space. It’s also possible that this patent is just another facet of an information operation that goes along with a larger UFO narrative to promote the Pentagon’s undisclosed interests. But the inclusion of China, a very terrestrial potential foe and America’s chief technological adversary, as a direct competitor when it comes to the technology seems odd and even counterproductive if that were the case.

On the other hand, some may say that this could be proof of two superpowers struggling to mimic the capabilities of something they are observing, but do not fully understand on a technological level. Considering all the unknowns, all possibilities are worth examining. But taking the information surrounding this patent at face value, it seems to point further to the possibility that the technology could indeed be manmade.