The international military and legal campaign against the Khazarian mafia is “95-100% likely to succeed,” according to probability models tested by the U.S. War College, say MI6 and Pentagon sources. This year’s anniversary of 9/11 was followed by a Friday the 13th and was a good time to push hard for their inevitable final defeat, the sources say. 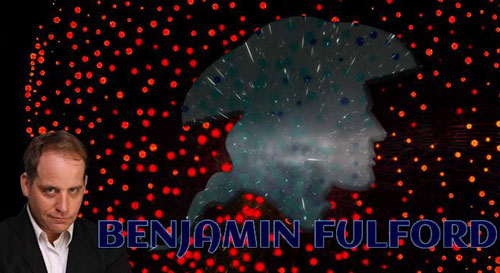 The key to the Khazarians’ defeat was handed over to the military by a group of Swiss mathematicians who analyzed 43,000 transnational corporations and traced their control to a group of 700 individuals, mostly bankers, MI6 sources say.

This is “a Ponzi scheme called the Global Network of Corporate Control (GNCC), which is in an interlocking or bowtie corporate structure,” the sources say. Military forces do their best work when they have a clear target, and this list of 700 individuals gave them that target, Pentagon sources confirm. The U.S. War College ran a series of “probability models” to come up with a plan that ensures “the Global Coalition for the Rule of Law” (i.e., The People) will ultimately prevail, the sources say.
https://www.newscientist.com/article/mg21228354-500-revealed-the-capitalist-network-that-runs-the-world/
https://arxiv.org/PS_cache/arxiv/pdf/1107/1107.5728v2.pdf

This doesn’t mean the war is over yet, since the Khazarian mob is literally fighting for survival as it stirs up trouble in the U.S., UK, Hong Kong, Iran, etc. However, these are just futile rear-guard efforts by a defeated, albeit extremely rich crime gang.

One key date was the September 17th Israeli election, where top satanic leader Benjamin Netanyahu and his fellow gangsters were using every dirty trick in the book to stay in power. The Jews had to either confront and defeat their satanist rulers or else face a combined Turkish/Iranian/U.S./Russian/Arabian coalition that will force them to remove their criminal leaders.
[Update Sept. 23: The Joint List decided to endorse Benny Gantz for Israel’s next prime minister, drawing condemnation from Prime Minister Benjamin Netanyahu’s Likud party, as President Reuven Rivlin began two days of consultations with party leaders to decide which candidate he will choose to task with forming a governing coalition.]

It was not an easy fight. Even the Mossad-linked information/disinformation site Debka was saying Netanyahu was planning to start a war in order to postpone the election and stay in power.
https://www.debka.com/netanyahu-to-hamas-via-egypt-idf-is-set-for-gaza-war-even-if-it-means-delaying-the-election/

Furthermore, the Israeli newspaper Haaretz was reporting that Netanyahu was taking a page from the book of the U.S. Democrats’ “Russian” election-stealing scam to try to claim that “the Arabs” stole the election.
https://www.haaretz.com/israel-news/elections/.premium-netanyahu-deploys-trump-s-election-fraud-canard-to-devastating-effect-1.7810906

By the way, for the “Russia did it” scammers in the U.S.: Senior Lieutenant Olga Orlif of the Soviet Army claims that Melania Trump’s grandmother fought alongside the Russians in WWII against the Nazi. 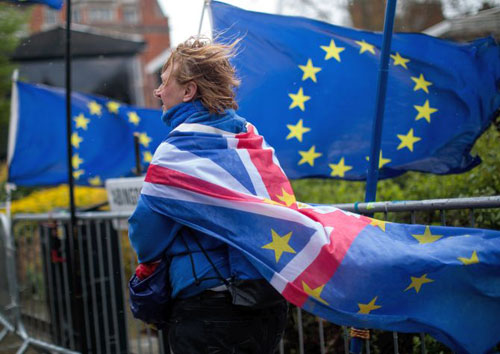 In any case, another key date is the October 31st Brexit deadline in the UK. Here, judging from the bizarre antics of politicians, the Khazarians have called in every bribery and blackmail chip they have. Just one example: opposition Labour Party shadow foreign secretary Emily Thornberry said on TV she would seek the “best deal possible” with the EU, then campaign against it.
https://www.zerohedge.com/news/2019-09-08/labours-ridiculous-position-seek-deal-eu-then-campaign-against-it

The Parliamentarians “lead the country into a state of chaos and panic when the decision is already made. In or out does not matter two hoots – in the end the EU will no longer exist,” MI6 sources promise. Staying in the EU would mean a loss of sovereignty and “is in effect High Treason and nothing else,” they say. “The Monarchy and senior generals of the British Army are all aligned to Sovereignty” and not the compromised politicians, they add. Public opinion in the UK is also against the politicians, despite the propaganda campaign by the press, who are agents of the mega-conglomerate controlled by the 700 bankers, they note.

It is also interesting that while the Western corporate propaganda press rants on about places like Israel, Hong Kong, and the UK, they are completely ignoring a major and violent revolution that is unfolding in Papua, New Guinea, where Australian and Indonesian authorities are now facing a choice between losing control or carrying out large-scale massacres, CIA sources say.

“In Sorong, a prison was set ablaze and more than 250 prisoners escaped. Thousands rallied in Jayapura in Timika near the world’s largest goldmine Grasberg, while a market was set on fire at FakFak,” says the article below.
https://www.channelnewsasia.com/news/asia/hundreds-escape-papua-prison-after-violent-riots-11825708
https://www.sbs.com.au/news/exclusive-footage-shows-indonesian-forces-opening-fire-on-papuan-protesters
https://www.sbs.com.au/news/don-t-let-west-papua-become-the-next-timor-leste-exiled-independence-leader-warns-australia
https://www.channelnewsasia.com/news/asia/indonesia-urges-calm-in-papua-after-two-weeks-of-protests-11857826#cxrecs_s

Indonesian police sources say they are under a gag order from headquarters that says, “No talking or making videos of the chaos going on now in Papua. Disregarding this order will have severe penalties, including jail time.” The people want independence from Indonesia, local sources say. 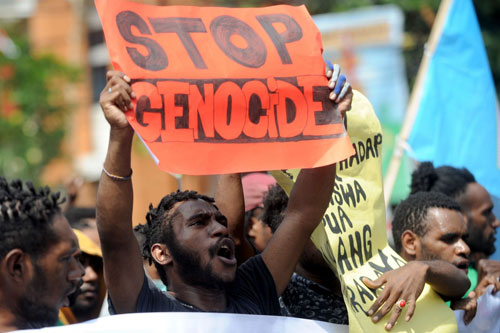 If the world does not pay attention, there is a real risk of a replay of the East Timor situation of the 1970’s, where Indonesian authorities killed between 100,000 and 300,000 in an effort to stop an independence movement there. Also at stake is control over some of the world’s biggest gold mines, gas reserves, and other natural resources.

Due north of Papua, New Guinea in Hong Kong, the situation is calming down despite the best efforts of the U.S. State Department and the CIA. Here is what a CIA source had to report on the situation in Hong Kong: “Some CIA staff have been caught red-handed, photographed and recorded making payments of HK$3000 per day for those up front in the street and HK$300 for airport sit-ins.” Now “five of the top organizers ran to the U.S. They got a special arrangement to change planes via Taiwan,” the source also reports.
“The Chinese secret police have infiltrated the protesters and are ‘picking up’ demonstrators. They are being taken to undisclosed locations outside HK. Will they be seen again?” the source wonders.

The battle in Hong Kong is just one front of a de facto hybrid war now taking place between China and the U.S. CIA sources say the next move will involve an attempt to shut down Hong Kong’s banking system.

Also, “In another blow to Zionist Hollywood and Big Tech, the 8,000-mile fiber optic cable from Los Angeles to Hong Kong sponsored by Google and Facebook may be blocked by U.S. President Donald Trump in his trade war with China,” Pentagon sources report.

Trump is additionally pushing France, the UK, Germany, and Japan to allow Russia to rejoin the G8, as a part of a campaign to woo Russia away from China, the sources say. They are also thinking of accepting Russian President Vladimir Putin’s offer to sell Russian hypersonic missiles to the U.S. as a part of this effort, they say. Buying Russian hypersonics would “force the military-industrial complex to innovate, compete, and stop raping U.S. taxpayers,” the Pentagon sources add.

Meanwhile back in the Middle East, the U.S. is preparing for a summit between Trump and Iranian supreme leader Ali Khamenei by arranging an end to Saudi Arabia’s war against Iran’s Houthi allies in Yemen, they note. Here, they say “the Yemen war is over because of advanced Houthi drones and missiles from Iran.” As a result, “Saudi Arabia is being forced to sue for peace and may have to pay reparations,” they say.

The simmering conflict in the Ukraine also appears to be ending. “The administration of Ukraine’s President Vladimir Zelensky has demonstrated a sensible approach and readiness for compromises, unlike his predecessors, Russia’s Foreign Ministry said in a statement,” according to the official Tass Russian News Agency.
https://tass.com/politics/1077084

Perhaps a peace deal in the Ukraine will make it possible for many Ashkenazi Jews to return to their real homeland, which is the Ukraine and not Israel. 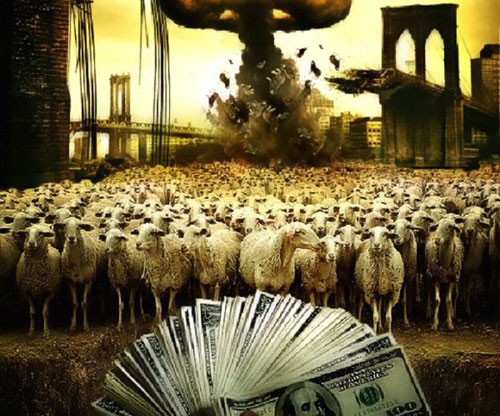 Finally, we note that the Khazarian-controlled financial system is becoming increasingly unstable and could collapse unexpectedly any moment. The graph below shows how the stock market continues to defy financial gravity and rise, even as funds continue to flee from it.
https://www.zerohedge.com/s3/files/inline-images/equity%20flows%20vs%20market.png?itok=KyhRU0Kj

The next chart shows how this is made possible by corporations using central bank money, much of it borrowed at negative interest rates, to buy back their own shares.
https://www.zerohedge.com/s3/files/inline-images/total%20flows%20buyback.jpg?itok=yqR4URZ3

In other words, the 700 or so Khazarian mobsters who own the Western central banks are printing money to lend to themselves so that they can buy more of the corporations they already own. Meanwhile, the real economy shows multiple signs of collapsing. That looks like a death spiral to me.
https://finance.yahoo.com/news/u-manufacturing-contracts-first-time-140000169.html
https://www.zerohedge.com/news/2019-09-03/28-signs-economic-doom-pivotal-month-september-begins

It also looks like the Khazarian mob is trying to exaggerate the damage caused by Hurricane Dorian in order scam the insurance companies which have been shunning their rigged stock market.
https://www.zerohedge.com/news/2019-09-02/dorian-could-cause-40-billion-insured-losses-ubs-analysts-warn

They did this with 9/11, Fukushima, Haiti, and elsewhere. Hopefully, this time the insurers will wise up and only pay the real hurricane victims.

By the way, Tokyo, where I live, was hit by a typhoon last night (Sept 8), but at least as far as my neighborhood was concerned it was just a regular storm that did no real damage.