A draft presidential order being circulated in the Trump administration could signal a return to the executive-branch lawlessness that followed September 11, 2001. 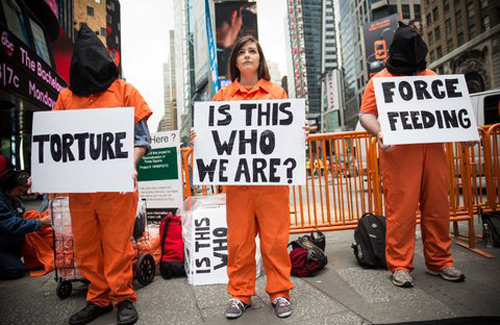 A draft of the executive order obtained by the New York Times and Washington Post calls for senior officials to consider re-opening the CIA’s network of secret prisons, where terror suspects disappeared and were deprived of their rights.
And by rescinding President Obama’s 2009 executive order that banned torture and closed the CIA’s prisons – where many of the worst abuses of CIA’s post-9/11 torture program took place – it paves the way for illegal torture to take place in secret.

White House Press Secretary disputed the authenticity of the draft order, saying that it is “not a White House document” and that he had “no idea where it came from”. But when asked whether the administration was considering re-opening black sites, he refused to answer, saying he would not comment on the document.

The CIA’s torture program has been condemned by a wide range of political and military figures, including Trump’s defense secretary, Gen. James Mattis.
The executive summary of the Senate Intelligence Committee’s exhaustive torture report, released in 2014, described brutal, inhumane and cruel treatment – and definitively concluded that CIA claims that the program had “saved lives”, “thwarted plots” and “captured terrorists” were lies.

In clips from an interview with ABC News, Trump said he believed torture tactics like waterboarding were appropriate and effective, but that he would heed the advice of his cabinet appointees.
“Would I feel strongly about waterboarding? As far as I’m concerned, we have to fight fire with fire” Trump said. “With that being said, I’m going with Gen. [James] Mattis, I’m going with my Secretary Pompeo” he said, referring to his CIA director, Mike Pompeo. “I want to do everything within the bounds of what you’re allowed to do legally. But do I feel it works? Absolutely, I feel it works.”

The draft order acknowledges a “significant statutory barrier to the resumption of the CIA interrogation [torture] program” but also condemns former President Obama for disclosures about it, and for opening a criminal probe into the “actions of intelligence officers” which it claims “had a predictably negative impact on the morale of the intelligence community”. The Justice Department closed the probe without charges in 2012. 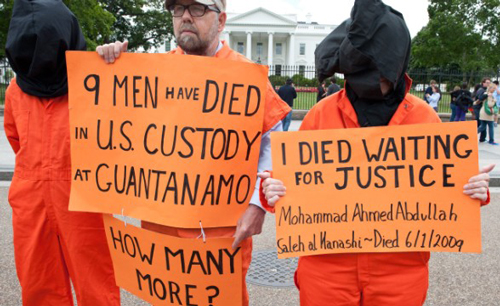 In fact, restarting the torture program would be illegal under a 2015 law Congress passed that restricts interrogation techniques to those listed in the Army Field Manual. CIA Director Pompeo acknowledged the effect of that law during his confirmation hearing – although he said in his written responses after the hearing that he would be open to altering the law.

Both of the Senate sponsors of that 2015 law – California Democrat Sen. Dianne Feinstein and Arizona Republican Sen. John McCain – expressed concerns that the draft order signaled an intent to violate that law. “The president can sign whatever executive orders he likes” McCain said in a statement. “But the law is the law. We are not bringing back torture in the United States of America.”
Feinstein took a similar stand: “Reconstituting this appalling program would compromise our values, our morals and our standing as a world leader – this cannot happen.”

Human rights activists responded with shock and alarm.
“The CIA’s use of secret prisons, enforced disappearance and torture in the past was patently illegal and deeply damaging to the reputation and national security of the United States” said Laura Pitter, national security counsel for Human Rights Watch. “Scores of men were subjected to brutal interrogation methods that were not only illegal but also an ineffectual means of gathering useful intelligence, and caused the US to waste resources pursuing false leads.”

Amnesty International’s Naureen Shah questioned Trump’s motives. “It’s not just the horrific risk that the U.S. will be hurtling towards another generation of torture and secret detention – it’s totally confounding why,” Shah said. “Clearly he’s pandering toward an extreme pro-torture fringe of his party.”
Shah noted that “President Bush was basically forced to reveal this program due to public outcry against it. “

The order would also put a hold on the transfer of detainees out of the Guantánamo Bay prison facility and would rescind an Obama era directive not to send terror suspects there for indefinite detention.
The order calls detention at the prison facility “legal”, “safe” and “humane” and says it is “consistent” with international law. It goes on to cite misleading statistics about the number of released Guantánamo detainees who have gone on to commit acts of terrorism.

“Any order to keep the Guantánamo Bay detention facility open would be a terrible mistake” Human Rights Watch’s Pitter said. “Guantánamo is a potent symbol of injustice, inhumane detentions, and torture.”
Positive reaction to the draft was muted, but Rep. Liz Cheney, daughter of former Vice President Dick Cheney, who championed the torture program after 9/11, said she was “glad to see President Trump take that step.”