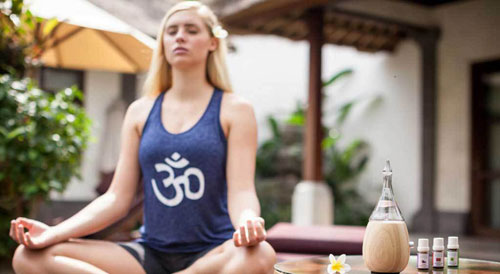 One of the negative effects of living in today’s high-paced world is an elevated level of anxiety. With the pressures brought about by work, studies, or even home, most people always live in constant worry, with some even turning to drugs for relief – with seriously detrimental effects.

The results of a study by researchers from Peru could offer good news: Essential oil aromatherapy, together with mindfulness meditation, could offer alternative forms of relief for anxiety.

This reaction stems from our ancestors’ fight-or-flight reaction – which was necessary for them to survive. These days, we may not be exposed to the same things, but anxiety still plays an important role in our survival. For example, we feel anxious when we cross the street, so we look both ways – reducing the potential dangers that we may face if we hadn’t.

However, anxiety becomes a problem when this “fight-or-flight” reaction grows out of control. The resulting condition, called an anxiety disorder, leads to physical symptoms like increased blood pressure and nausea and interferes with the normal function of the brain.

In the study, which was published in the January 2017 edition of the Journal of Traditional and Complementary Medicine, researchers looked at how two Satureja species – S. brevicalyx and S. boliviana – can be used in aromatherapy to reduce anxiety levels. The two plants have been used in traditional Andean medicine, with S. brevicalyx used as an analgesic and S. boliviana for altitude sickness and migraines.

To test this theory, researchers opened a free meditation and aromatherapy course for the study. Of the 121 people who were enrolled, 108 took part in the study. The participants’ ages ranged from 18 to 45 years. They were then divided into six groups – One was the control group, while the remaining five were the experimental groups.

To measure anxiety levels, the participants took the State-Trait Anxiety Inventory (STAI) before and after the procedures.

Based on the results, everyone who took part in the mindfulness intervention procedure posted lower scores than the control group. Those who were given aromatherapy after the intervention even poster lower anxiety scores.

According to researchers, having an aromatherapy session after intervention could supplement its positive effects. In addition, anxiety levels dropped when participants were given essential oils because of linalool, which has sedation and hypnotic effects.

Other essential oils that help you calm down

If you sense a panic attack coming – or find yourself tossing and turning in bed – these essential oils may do the trick of keeping you calm.

• Lavender helps with anxiety and promotes better sleep, as well as improves circulation.
• Clary sage contains omega-3 fatty acids and monoterpene linalool, which promotes mental wellness.
• Rosemary, a culinary aromatic, is a proven remedy for anxiety, stress, and depression.
• Bergamot helps deal with depression, stress, and anxiety.
• Lemongrass has a sedative effect that induces sleep.
• Bitter orange is a widely accepted solution for anxiety, insomnia, and even epilepsy.

Eternally Connected: How Technology Disconnects You From Yourself