A fundamental exercise for the revelation of the Supreme Self (Atman)

One of the most effective methods for the Revelation of the Divine Self (ATMAN) was described by the great yogi and sage RAMANA MAHARISHI (see photograph). This is the very method that he used in order attain the supreme state of spiritual liberation. This method is called ATMA VICHARA and it consists of a progressive revelation of the Supreme Self through the frequent re-iteration of the question “Who am I?”. 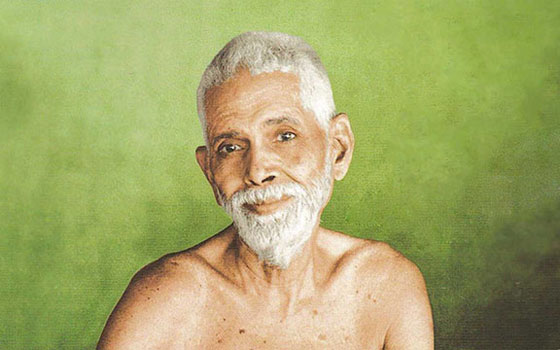 From a technical perspective, this method is extremely simple, but still, it’s difficult to practice, because it requires a lot of perseverance and the aspiration of knowing our divine essential nature.

1. We ask ourselves “Who am I?” and then, we gradually and systematically begin to dissociate ourselves from all the elements that we used to falsely identify with our own being, calling them “I”.

2. We answer: “I am not my physical body” and then we try to actually live this experience for seven minutes, perceiving ourselves as separated from our physical body. In order to perform this process of dissociation, some yogis recommend that during this phase we place this consciousness of our individuality that we associate with the notion “I”, in the area in the middle of our skull, which is the residence of SOMA CHAKRA, or in the area above our head, where SAHASRARA resides, and we will watch the other parts of our body from this FOCAL POINT, with great detachment, detaching ourselves from those parts. In the end, the consciousness of the I will rise above the head and it will dissociate completely even from the area where it was previously placed. Thus, you can attain a complete detachment from the physical body.

3. Then, you will continue by saying to yourselves: “I am neither one of the five organs of action: the anus, the sexual organs, the legs, the hands, the vocal cords.” While you will utter the name of every organ of action, you will clearly experience the state of dissociation of your existential consciousness that you define as the “I” from the respective body parts. You will then meditate on the state of dissociation from every action organ for approximately 3 minutes.

4. Next, you will then utter: “I am neither one of the five sense organs: nose, tongue, eyes, skin, ears.” And this time as well, you will meditate upon each of them for 3 minutes, performing an ontological split, in other words, separating the consciousness of the “I” from each of the sense organs.

5. Next, you will utter: “I am neither one of the five vital breaths: PRANA, APANA, SAMANA, UDANA and VYANA”. You will stop once again and you will meditate for 3 minutes on each of these life-supporting vital energies which help the activity of your cells and organs, by visualizing the manner in which each of these breaths work after you will fully live the experience of your divine consciousness, identified as the “I”, by all these vital functions.

6. If you’ve followed all the recommendations up to this point, attaining this dissociation of the spiritual consciousness of the “I” from these ephemeral aspects, the only elements that you will now need to detach yourselves from are your very own thoughts. Thus, the final step will be the one when you’ll say: “I am not these thoughts.”

There is a considerable difficulty which arises here, coming from the fact that the thought of “I”, that we projected in the second phase of this exercise, for example, in the area in the middle of the skull or on the top of the head, was also a thought that is in fact not the true Divine Consciousness of the Self. Hence, the very thought of “I” must dissolve in the end. Thus paradoxical process could be resembled to the act of climbing up on the highest branch of a tree and cutting it off while we are sitting on it.

RAMANA MAHARISHI said: “The physical body is incapable of saying “I” himself. On the other hand, the Supreme Divine Consciousness does not reveal itself to us from the very beginning in the form of the “I”. This is known as CIT-JADA GRANTHI (The core or the intersection or incidence point of consciousness and matter).

It can be also called the enchained Soul, the subtle body, the ego, the mind and so on”. Here, RAMANA MAHARISHI reveals the fact that we will predominantly associate the existential feeling defined as the “I” with one of the lower or more refined structures or energies of our being, in relation to our own level of consciousness.

This exercise is complete in itself and it constitutes a genuine method for spiritual evolution, being sufficient for attaining the ultimate spiritual realization or entering the realm of Divine Consciousness. If you will succeed in adequately controlling your mind in order to motivate it in practicing this exercise until achieving perfection, you will undoubtedly attain the state of SAT-CIT-ANANDA (Pure Existence, Pure Consciousness, Pure Bliss of the Ultimate Reality of the Divine Self).

Why did Tesla say that numbers 3, 6, and 9 were the key to the universe?

How to Stay Calm and Present Throughout the Day

Whistleblower: How To Detox And Protect Against Chemtrails, Microwave Towers