Shambala is not just a legend of the past, but a reality of the present. Not only the mysterious Tibetan initiates of the past centuries managed to reach Shambala. An example in this respect is the Russian painter Nicholas Roerich (1874 – 1947), a mysterious and fascinating character, whose friends say that he was in Shambala and whose inspired descriptions and paintings reveal his profound knowledge over Shambala. Nicholas Roerich traveled and lived for almost twenty years in India, Himalaya, Central Asia, China, Mongolia and Tibet, studying the folk traditions, exploring mysterious and sacred places and having the opportunity to meet sages who guided him in his research. 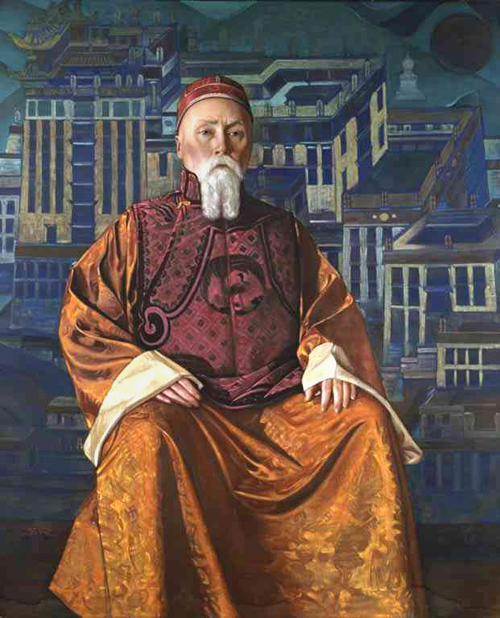 We will now present you with a few exceptional fragments from a text written by Roerich in 1928, at Talai-Pho-Brang, in Tibet. This text, suggestively entitled “Shambala, the magnificent”, presents us with the dialogue between Roerich and a Tibetan Lama who was initiated in the mysteries of Shambala and who confirmed the authenticity of his direct experiences and knowledge on Shambala and revealed many mysterious aspects to him. Unfortunately, Roerich kept silent regarding most of these revelations…

Roerich: “Lama, when we were close to Ulan-Davan (in Mongolia) I’ve seen a huge black vulture who flew very low nearby our camp. He flew before an amazingly beautiful sphere which was flying above us, heading south and shined into the sunlight.”
The Lama winced. He asked us promptly, with shining eyes:

“Did you also feel a scent of incense in the desert?”

“That’s right, Lama: in that rocky desert, days away from any human settlement, many of us could feel a scented breeze. Thus happened several times. I’ve never felt such an enchanting perfume” (n.n this paranormal perception confirms the interference with a subtle spiritual world).

“Ah – this means that you are protected by the Shambala. The black vulture symbolizes the enemy who is eager to destroy the results of your work and effort, but the protective force coming from Shambala, manifested in the material form of a shining sphere follows you everywhere. This force is always next to you, although you are not always able to perceive it, for it only manifests visibly in certain crucial moments, in order to support you, by giving you inner strength and guiding you. Did you remember where was that sphere heading? You should continue your journey by going in that direction.“ 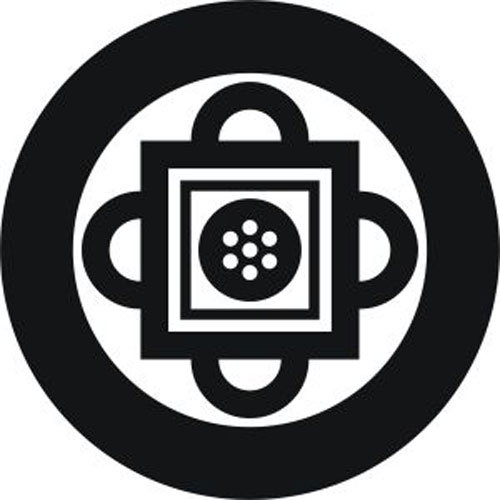 The call of Shambala

“You said that you are familiar with the fact that when a human being hears the sacred word Kalagiya, in fact he/she is called into the world of Shambala, being granted permission to enter it. When you will hear this imperative calling, you must know that the path to Shambala is open for you. You must answer from all your heart to this calling and you should remember the moment you’ve first felt this, because starting from that moment, you will always be assisted by the Blessed King of Shambala. People should learn to acknowledge and become aware of the way in which they are receiving help from subtle entities, because most of the times, they have the tendency of rejecting the help given to them, due to the fact that they are unable to understand these aspects”.

Of course, not all those called are the chosen ones who answer this calling and thus receive this unconditional support of the spiritual forces in every beneficial thing they do. Many of them are called but few are chosen, and what matters here is the manner in which the human being is able to respond to this calling with dedication and abnegation, by abandoning their personal interests and their ego, in order to walk the difficult but fascinating spiritual path that leads them towards the fulfillment of their own spiritual purpose.

Regarding the existence of several passages which lead to the world of Shambala, Roerich gives us a few inciting details: “Lama, in Tourfan and in Turkestan I’ve seen some caves where there are some unexplored parts, tunnels that are said to be extremely long. Is it possible to reach Shambala through those tunnels? The locals told us that sometimes, there were strange people coming out of those tunnels and upon entering their towns, they wanted to buy all sorts of things with old coins, that were no longer in use.”

“It’s true, it is true, I tell you, the inhabitants of Shambala sometimes come to Earth, in order to meet the human beings who are inspired and guided by Shambala and to dedicate their lives to fulfilling the divine ideals of wisdom and compassion. Then they bring precious spiritual gifts with them and holy relics, for the good of the whole mankind. I could tell you several stories of the wonderful gifts which were materialized directly from space.” 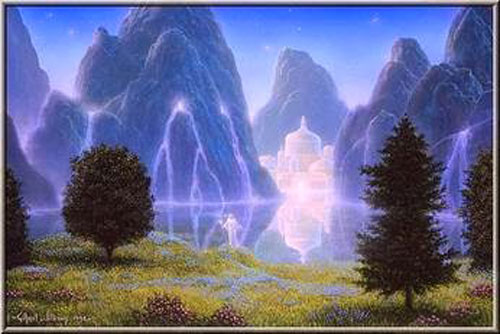 The king of Shambala often manifests on Earth

Next, Lama tells of the direct manifestation of the King of Shambala into the physical realm. The prophecies that he made are already obviously very accurate and I’ve underlined these aspects through brief adnotations (between parentheses) in the original text:
“Even Rigden-jyepo (this is the name Lama uses to refer to the King of Shambala) himself sometimes shows himself in sacred places, in monasteries and in certain moments he makes prophecies.

At night, or early in the morning, before sunrise, the Leader of the World comes into the Temple. When He leaves the Temple, all the lamps light up, all of a sudden. Some of those present acknowledge the Great Stranger and bow before him in deep respect. They listen to the prophecies of the King of the World with the greatest attention. A great age will come soon (the passing of the planet to Satya Yuga). The Leader of the World is ready to fight (referring to the final battle between the forces of good and evil, the biblical Armageddon). The cosmic fire will approach Earth again (this can be a reference to the danger of colliding with an asteroid). The Planets will manifest a new era.

But before the new age of prosperity, there will be many cataclysms (we have already seen, in the past few years, that there were more and more earthquakes, blizzards, hurricanes, floods, avalanches that occurred). Again and again, humanity will be tested in order to attain spiritual maturity. The underground fire is now trying to connect with the dangerous and mysterious Akasha, the fifth subtle element. If the beneficial forces on the planet will not manifest in unison, the shattering cataclysms are inevitable. (Here we can see a very clear statement of the importance of working in unison, which, as we already know, amplifies the effectiveness of spiritual actions and techniques).

There are also stories which tell of the manifestation of the blessed Rigden-hyepo, the King of Shambala, in order to directly transmit certain indications to its messengers; for example, the apparition of the mighty King on the road to Ladak, on a black rock. There were messengers who were riding from all directions and who came to listen to his words with utmost respect, and then they scattered all across the land in order to promptly fulfill his wise commands.” 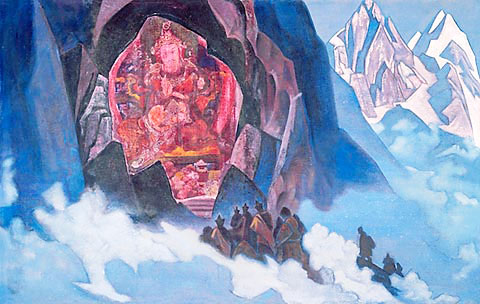 Every genuine spiritual school is inspired and supported through the mysterious world of Shambala and every sincere spiritual aspirant is supported and guided by the mysterious force of the sages of Shambala and the King of the World. Consequently, if we will become aware of these aspects, if we’ll sincerely and frantically invoke their help and guidance, we will achieve success much faster, both in our spiritual practice as well as in all our beneficial actions. “Directly calling the Blessed King of Shambala, one can attain success,” says Lama.

“When they say that the shortest spiritual path goes through Shambala, we must understand that the essential message of Shambala is that the supreme spiritual realization, the supreme ultimate liberation is not an abstract, unreachable purpose, but it can be obtained through sincere aspiration and sustained spiritual effort right here, on this Earth, in this very life. This is the teaching of Shambala. It is true, any being can attain spiritual realization. It is true, any being can hear the sacred calling, Kalagiya!

But it is not enough to hear the calling of Shambala. Those who are called must give themselves with all their being to spiritual seeking and serving humanity and their fellow human beings. Those who work in this world under the inspiration and guidance of the Shambala, the initiates and messengers of Shambala, they do not live in retreat and isolation, far away from the world.

On the contrary, they travel everywhere. Often people do not recognize them and they do not know who they are, and sometimes they do not even know each other. But what these exceptional beings have in common is the fact that they fulfill their own spiritual purpose by accomplishing some beneficial actions, not for themselves but for the Glorious Shambala; and they are all familiar and they all manifest the great symbol of anonymity. Sometimes they can seem rich, but in reality they do not possess anything.

They are given everything but they never take anything for themselves. Thus, when you give yourselves in abnegation to the World of Shambala, everything is taken from you and everything is given to you, simultaneously. If you are having regrets, then you will be defeated; if you give everything gladly, you will feel enriched.”

Here we can see a very clear expression of the initiatic, magical value of renunciation and detachment, known in the yoga system as aparigraha (the act of refusing to accumulate material goods), one of the 10 ethical and moral principles which represent the foundation of yogi practice. Renouncing the material attachment and interests comes with a genuine spiritual enrichment. Moreover, the one who seeks to manifest as a true divine transmitter and to give divine light, divine love and spiritual help to other human beings will receive, in return, directly from God, the very same beneficial energies that are manifesting through his being.

“Essentially, the teaching of Shambala is that these things, these realities that I am talking to you know, are not something difficult or impossible to attain, and they are not hidden either. Thus, you should just know that Shambala exists and manifests here on Earth; you will understand that the highest spiritual achievements are possible here, on Earth, and that all your efforts are rewarded here, on Earth.

The graceful answer of Shambala will fully compensate your spiritual efforts. The spiritual Teaching of Shambala is of a major importance, its inspiration and support will help you in all your beneficially oriented actions, they will prepare you in order to be able to fulfill your spiritual purpose, they will open your soul in order to accept everything that manifests for you as coming from God.

It is true, true, I tell you, through Shambala and with the help of Shambala, by practicing Kalachakra Tantra, you will rapidly achieve perfection and the state of becoming one with God.

This article was taken from Yoga Magazin no. 37

A fundamental exercise for the revelation of the Supreme Self (Atman)

The program of the last day of the Congress «God is giving us signs…», Sunday, 17th…

The program of the fourth day of the Congress «God is giving us signs…», Saturday,…