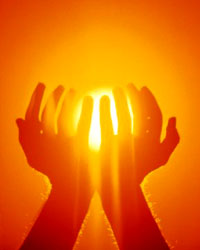 Bhuvaneshwari (or Buvanesi as she is also called in certain areas in India) is the fourth Great Cosmic Power in the Hindu tantric pantheon. This Great Cosmic Power is worshipped as the Great Goddess protecting all worlds of Manifestation. Actually this attribute of the goddess is symbolized by her very name, meaning the Glorious Queen or Governess (Ishvari) of the entire Creation, with all the worlds (Bhuvana) it containes. Bhuvaneshwari is the creator of Earth, Water, Fire, Air and Ether, of the entire Nature (Prakriti), of the Sun and the Moon. In other words, she is the Divine Mother protecting all worlds. Therefore the whole Macrocosm stands as her body and the countless existing beings represent her precious jewels and adornments.

The material regarding the Great Cosmic Power Bhuvaneshwari is structured along several chapters:

1. Bhuvaneshwari represents the power of the endless opening and expansion

, of equality in spirit and deep peace that nothing can disturb, containing and supporting all things. Indeed, we will be able to better understand this assertion when evoking the tantric teachings regarding the Great Cosmic Power Bhuvaneshwari. They say that the Goddess is the original space out of which any thing or being is later on objectified.

2. The frantic adoration of the Great Cosmic Power Bhuvaneshwari

makes it possible to transcend the human being’s ridiculous limitations as it reveals us the fact that true universal love, free and completely unattached, has no shape. In other words, such love is not “restricted” and focused upon one or the other of the objectified shapes (a human being, an animal, etc.), nevertheless it encompasses all shapes. Such a sublime love is neither limited to nor does it aim at holding onto something just for itself. This aspect makes it always manifest in a deeply altruistic way. On the other hand, the ineffable space of love permanently „nourishes” all that comes out of it thus generating growth and development.

3. The symbolic description of the Great Cosmic Power Bhuvaneshwari

depicts her as having three eyes (symbolizing the total knowledge of all the worlds in Manifestation), very large breasts (symbolically nourishing all beings with the essence of life) and a smiling, kind face. These details underline the maternal aspect of this Great Cosmic Power’s manifestation once more. Her glory and greatness are also symbolized by the pure radiation it emanates (resembling the rising Sun) and the Moon pouring her divine nectar (or soma) from the goddess’s head.

4. As she represents space, Bhuvaneshwari is Kali’s complementary aspect.

As we know it, Kali represents time: the two goddesses therefore stand as the two main aspects of the Supreme Goddess (Shakti), respectively infinity and eternity. In other words, we can say that somehow Bhuvaneshwari creates the „stage” where later on Kali dances her terrible dance of life and death. This analogy also allows us to notice the fact that the supreme goddess simultaneously is the one witnessing (or observing) as well as the one rejoicing at and taking part in Kali’s cosmic dance.

says that in the Beginning only the Sun (as the Creator of the entire Universe) was the master of the sky. The sages (rishis) begged the Sun (Surya) to create more worlds and offered him soma as sacrifice. Then Surya used his Supreme Energy in order to manifest the worlds (lokas or bhuvanas). This Supreme Energy thus assumed a shape of its own as the splendid manifestation of the Great Cosmic Power Bhuvaneshwari.

6. Bhuvaneshwari’s physical beauty radiates out of her inner splendor

and it is thus sung in the “Hymns to Goddess Bhuvaneshwari” by Sir John Woodroffe:

“Oh, Mother, again and again I look upon your shapely neck, which has stolen the beauty of a well-formed shell and adorns a pleasing necklace and other jewels. Yet I am not satiated. I often recall to my mind your face with large round eyes and noble brow, radiant cheeks and smile, the high straight nose and lips red like Bimba fruits. Whoever contemplates on your wealth of hair lit by the crescent moon and resembling a swarm of bees hovering over fragrant flowers is free from all shackles and will never be born again in this world”.

Bhuvaneshwari represents the power of endless opening and expansion