During the Hiatus spiral, Kalki Avatar manifested for me in an overwhelming way, sending me a message we should all take into consideration 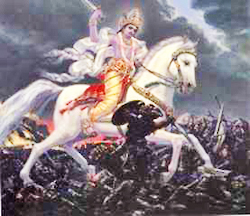 During the Costinesti 2013 holiday spiritual yoga camp, there were some aspects thoroughly presented about KALKI AVATAR, together with the initiation in the MANTRA of communion with this divine emanation. After the camp, yoga teacher Gregorian Bivolaru received a message about an exceptional state of deep spiritual communion with KALKI AVATAR, a confession that emphasizes, once again, the extraordinary value of our yoga school and the initiations offered within it.

Before presenting this confession we will mention, for those of you who are not familiar with KALKI AVATAR, a few aspects regarding him.
In the oriental spiritual tradition it is stated that in times of extreme decay of humanity, God as VISHNU – the preserver of Creation, descends in the world as an AVATAR in order to re-establish harmony and to impel human beings to start following the true moral and spiritual values. Thus, at the end of KALI YUGA (the Dark Age in which we currently are), KALKI AVATAR will appear on Earth as the tenth AVATAR of VISHNU and the last of this evolutionary cycle of mankind. He is also the first spiritual guide of the next age, SATYA YUGA, the age of spiritual thriving (equivalent to the “thousand years of peace” foretold in the Bible). The birth, the life and the spiritual mission of KALKI AVATAR are described in detail, as if they had already happened, in the KALKI PURANA and BHAVISHYA PURANA. 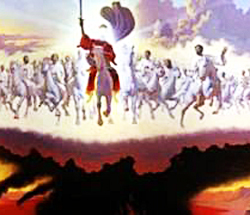 Below you have the transcript of Ms. Stanciu Evonela’s confession – yoga practitioner from Bucharest – regarding the revelations she received from KALKI AVATAR during the yang spiral that took place during the annual hiatus of 2013:
“In the beginning of the spiral I felt something happening inside me – I was longing for God and this longing was overwhelming me to tears. Then there was a fire manifesting at the level of the heart, a fire that illuminated my entire body; I experienced a state like never before. I confess to you in all honesty that I felt God the Father in all of my being. My tears were flowing because of all this love and happiness. During that entire spiral, I felt the presence of Grieg and of KALKI AVATAR.

KALKI was of a colossal beauty and I could feel his entire strength and power, a strength that left you speechless. At a certain point, my mind started to interfere with my meditation. I wasn’t able to abandon myself enough. I told myself that I did not know his MANTRA, not did I know what he looked like. (Although I had been selected, I couldn’t take part in the initiation due to some personal problems.) Abandoning myself more and more, during the meditation, I dared and asked KALKI AVATAR why and how come it was I who could see and hear him and whether he is real or not. For a moment, he didn’t answer. Then he told me it is his will that I see and hear him. And he told me to remember his words. He told me he came because he could no longer stand all this evil here on Earth, because we do not love each other and we do not help one another enough, even us, the people who were present there, at that grand gathering. He told me we are not offering God the Father the first place in our lives. 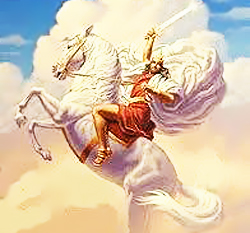 After that, he told me about Grieg, that it is a tremendous grace from God having him here as a spiritual guide, teaching us only good and benefic things. However many of us, those who were present there [at the spiral] weren’t capable of opening our soul and applying all that Grieg has and still is teaching us. He said we should always have a great amount of faith in Grieg and be close to him (Grieg) because his mission is a very elevated one here on Earth. “I will come as soon as possible, to help you, but it all depends on you, how many of you will be prepared and opened to welcome me into your hearts”. Then he said, one more time: “Love one another and help each other, stand always close to him (pointing towards Grieg)!”

After that, I could hear they were speaking into the microphone: “Please return to the normal state”, hence the meditation was over.

I thank God for everything, to KALKI AVATAR and to our spiritual guide, Grieg, for all the love, for all the grace that I was honored to receive. 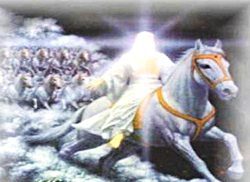 I confess that after that, my life took a turn for the better. Even if I’m still dealing with some health problems, I have a much brighter perspective on life, I can understand the divine game much better and I do my best to give God the Father, the first place in my life and to have the power to thank Him for everything he does for me, I do my best to help those around me and help them as much as I can.
Thank you for existing and for everything you taught me! I embrace you lovingly.”