There have been many articles on yogaesoteric.net regarding the spirits of nature and their interaction with people, especially children. The skepticism of the robotic man today is doubtlessly prone to rebellion against these “children’s fairytales”. And this is exactly what happened to the little girls in the following story. An entire world split, at that time, in two teams, believing or negating the existence of fairy tales. We can have our doubts when the children are talking about playing with elves or fairies, but what can we say when we have photos of them…?

Every child believes in fairies and this is perhaps, due to being able to see them… But when they are also able to take photos of them, the controversy goes viral. Two British girls have caused such a controversy at the end of World War I. A true fairytale!

“I am sending you a picture with fairies” 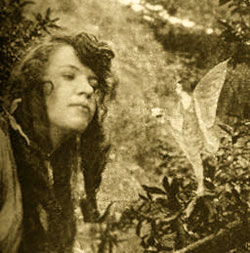 A few days before the end of the First World War, Frances Griffitte, an eleven year old British girl wrote a letter to her friend, Johana, who lived in South Africa: “Dear Jo, I hope you are fine. I wrote you another letter a while ago that probably got lost, because I haven’t gotten any answer from you. In school, I am learning French, geometry, algebra and I’m even taking household classes. Last week, my father came home. He had been gone for two months in France. Everyone here says the world will be over soon and then we will hang a flag on our room’s window. I’m sending you two pictures of me. The first one was made by Uncle Arthur: I was in the courtyard behind the house, wearing my bathing suit. The other was made by Elsie: I was with some fairies on the bank of a river. Rosebud is just as fat as you remember her, but we’ve made her some new clothes. How are Teddy and Dolly?”

It could’ve just been another mundane letter sent by a young school girl to her friend, if it weren’t for that strange reference to the fairies in the picture. For the two girls it was nothing out of the ordinary to be able to see and take pictures of the fairies; they were a part of their child life which they spent in that village, Yorkshire. Frances wrote on the back of the photograph: “The fairies at the river are our friends, Elsie’s and mine. I find it inexplicable that while we were in South Africa, I haven’t seen any fairy, maybe it was too hot for them…”

The history behind a famous photograph

The history behind this photograph is well known; she caused a lot of turmoil at that time. It was 1918, in July, when one afternoon, Elsie and her sister, Frances, borrowed their father’s camera. They wanted to take photographs to send to their cousins. The day went on with no incidents, excepting Frances’ imprudence, who fell into the river and wet her clothes. In the evening, Mr. Arthur Wright, their father, processed the camera film. He was surprised to notice a couple of white shades which seemed remarkably awed. Elsie said they were fairies, but Mr. Wright did not take notice of her.
In august, the same year, it’s Frances’ turn to take a photo of her sister on the lakeshore. And again, their father discovered some white shades on the film, upon processing it. Being convinced their girls just wanted to play a prank on him, Mr. Wright forbid them to use the camera. And yet, Arthur Wright and his wife, Polly, are intrigued by these happenings; they searched the girls’ room and the riverbank for traces of the children’s play but they couldn’t find anything. Elsie and Frances kept on saying they were able to see the fairies they took photos of. What could possibly be more normal for a child than a fairy?

Grown-ups are getting excited 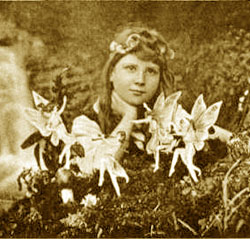 Then, after a while, the family started to show the photos to friends. Everybody got excited and quickly forgot the whole thing. Next summer, Polly Wright was present at a reunion of the Theosophical Society in Bradford, who took on subjects like the occult and different kinds of ectoplasm. That night, the discussion theme was “The Life of Fairies”. During that reunion, Polly Wright told a few persons about her daughters’ success in taking photographs of the strange creatures. The word got about and at the Theosophical Congress which took place shortly after that night, the photos were circulating amongst the members of this esoteric society.

Edward Gardner, the most well-known member of the Theosophical Society, gave them to the press in order to publish them and also requested the advice of a professional photographer and asked him to obtain the negatives of the original, “clearer and cleaner”. This is where the “Story of the fairies in Bradford” truly begins. In England, who was just getting out of a world war, everyone was now debating over a picture of some fairies. It was amazing!

In the mean time, Sir Arthur Conan Doyle, the “father” of Sherlock Holmes was also in the process of writing an article about fairies that was about to be published in the “Strand Magazine”. He was especially passionate about spiritism and paranormal phenomena. When he heard about these photos he did everything he could in order to get them.
Sir Oliver Lodge, one of the pioneers of psychology in Great Britain, told Conan Doyle that they’re just “dancers in fairy costumes”, and that the shots are actually counterfeit. Another paranormal specialist even said that the fairies “had a hairdo which was a bit too Parisian to be genuine”. But all these comments were not based on the original photographs.
One could notice that the silhouettes were moved: one extra argument for those who believed in the authenticity of the fairies which were presumably alive at the time the photo was taken. The experts from Kodak declared not even a master of trick shots would’ve been able to make such a crafty trick shot. The theosophist Edward Gardner triumphed: the fairies were the evidence for the existence of the “spirits of nature”. And in order to silence his detractors, Gardner wished to take new photos. In August 1920, he gave Frances and Elsie a camera and 20 photo plates.

The skeptics are still… skeptic 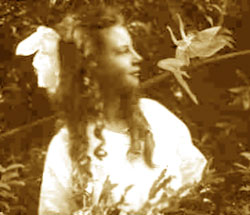 In the mean time, Sir Arthur Conan Doyle published his article in the “Strand Magazine”, promising to illustrate his affirmations with a new series of shots. The day the article was published, the entire edition was bought in a matter of hours. The feedback consisted in people accusing Conan Doyle of wanting “pervert the imagination of children with such nonsense.” The opinions ranged from admiration for the mastery of the trick shots, polite skepticism, humor and rage. Those who truly believed in the existence of fairies were very few.
In 1921, Frances and Elsie took new photos of the fairies. Gardner gave them two cameras and some photo plates which were rigged with certain markers in order to stop the shots from being tampered with. So there they were, the two girls were trying to capture the fairies on film. Will they make it? Will the strange beings be as beautiful as always? This time, an entire world awaits.

And they’ve shown themselves, even more convincing than the first ones. The images were so convincing that the great writer, Sir Arthur Conan Doyle, became the fierce defender of their cause in the press investigation which started on this occasion. In the “Strand Magazine”, Doyle wrote vast articles on the return of the fairies, but he was strongly opposed by the skeptics who kept on attacking him in an ironic campaign meant to mock and ridicule.
The sensational story was brought to silence. Whether it was true or not, the story was forgotten until the 1970s, when the journalists rediscovered Frances and Elsie. In an interview from 1976, Frances confirmed that the photos weren’t faked; moreover, she also stated that back then, when they were young, they both used to play with the fairies, in a gully close to their village and this was nothing out of the ordinary back then…

The art of arousal – the gate to sublime amorous experiences

How great and how obvious is your benefic accomplishing power? (III)