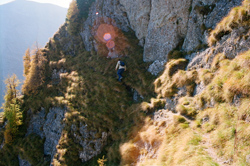 Recently a very interesting and also unique in itself show was broadcasted on one of the Romanian television channels. In the show they stated that Pentagon researchers discovered in 2002 in Bucegi Mountains a huge underground chamber dug under the mountain and a mysterious tunnel that apparently does not communicate with the outside but it “begins from an exterior ramp” turning at a 26 degrees angle towards the interior of the mountain. It is said that the entrance in the tunnel and the central room inside the mountain is protected by an energy shield that does not allow ordinary human beings to cross inside. Its vibrational level resembles to the one of a subterranean energetical structure discovered by American scientist close to Baghdad city in Iraq.

As stated by unofficial sources the tunnel is lit by a yellow-greenish light that has an undetected source. It is said that at its end you find a huge stone gate that slides open protected by this mysterious energy shield. The respective sources mention that some foolish people who got too close to this shield died instantly by cardiac arrest and that any object thrown towards it immediately turned into soft grain.

This stone gate opens to a room inside the mountain of 30 m high and 100 m long where along two side opposite walls you have huge tables of minimum 2 m high. On the tables you see cuneiform characters and simple geometric figures engraved like circles and triangles. Some of those tables are connected to some wires and seem to be used as consoles that can project holograms containing scientific information. According to the show’s producers this room seems to have been some sort of command center for the entire Earth some time ago all coordinated by an extraterrestrial civilization that included beings with impressive physical dimensions.

It is said that in 2003 a secret meeting of the CSAT (the Council for Security and Territorial Defense) where some of its members wanted to inform the Romanian people about the discovery of some ancient civilizations in Romania. It seems that this discovery is big and hides impenetrable mysteries because the same sources mention that their research was quickly suppressed through the intervention of some foreign occult forces that made “huge pressure” on Romania’s Government to stop that event. 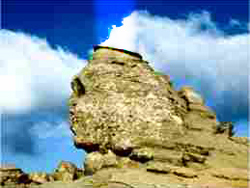 In the years 1993-1994 a lot of strange phenomena happened in Buşteni-Sinaia area. Locals from this area on all ages often stated they were having insomnia during the night but also felt rejuvenated the next day. A few years later in the same area a lot of regular lower earthquakes were recorded between 8 pm and 3 am. Specialist from the Center of Earth Physics and from the Cheia Seismic Station noticed that these earthquakes did not have their epicenter in Vrancea area as expected; still they didn’t find any explanation either. The following year the earthquakes’ intensity grew being felt by most locals in the area. It was strange that every time before it happened one could hear a dull sound fact confirmed by locals from Buşteni area. The mountain rescue and mountain climber Nicolae Blegu said that his earthquakes were local and strong enough to be easily felt by everyone. It all lasted till 1999 when all these inexplicable phenomena stopped.

“The Journal” published a long article on these anomalies. Here is what Traian Trufin geologist curator at “Cezar Petrescu” Museum from Buşteni publicist and researcher of the strange phenomena previously described declared: “My firm belief is that there is another world in the subterranean. Extraterrestrial beings live there, beings that know everything about the surface world. Their informational specter is very wide. But I don’t know what kind of activities they are doing down there and why they don’t want to communicate with us. Probably because the world is not ready yet to understand certain things.”

Traian Trufin believes that underneath the Bucegi Mountains there is an artificial system of galleries dug long time ago by another civilization and that inside these galleries and underground chambers different experiments take place. The hot spot is around the Caraiman Cross area.

Researcher Vasile Rudan related some time ago about an inexplicable event that he directly witnessed and experimented personally together with a friend of his called Ioan Olaru, president of Carpatica Foundation. The two were close to Omu peak close to Dâmbovicioara cave heading to a certain area where Vasile Rudan discovered long time ago a secret entrance into the underground. The researcher claimed that the entrance was protected by a huge rock built in stone of 4,5-5 m height and 6-7 m long. 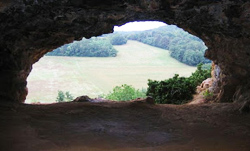 When the two were at 500 m of the specific place they felt as if inexplicably their legs began to stiffen and shortly after they were unable to take another step without tremendous effort. Ioan Olaru stopped walking and sat tired on a rock while Vasile Rudan struggled to take another step trying almost desperately to move his legs with his hands (!). After approximately half an hour of such efforts the two gave up their intention to reach the stone gate and turned back to the cabin without any efforts. Their strength came back like wonder.

The clairvoyant Valentina a famous blind woman from Iaşi mentioned in some of her interviews that she discovered through clairvoyance an important energetical flow that surrounds our Sphinx from Bucegi resembling to the one in the Giza complex from Egypt. Valentina said that deep beneath the Bucegi Mountains is a system of tunnels that connects to the pyramids in Egypt. “There is the past of mankind. But not the mankind 2000 years ago. It’s way back. The Bucegi Sphinx is the guardian of the earth we live on. Actually in Bucegi Mountains through the Sphinx comes a very powerful energy stream. Using the science that will be on Earth someone will succeed to get underneath the Bucegi Mountais and will find all those writings and meaningful documents and using those signs he will know what to do. But this will happen only after the energy stream on top will become weaker” said the clairvoyant that never climbed the Bucegi Mountains.