Meditating as a red poppy

Thus, from that day, the young man began to learn how to bloom…Meditation means, first of all, a stable position and this is what the mountain had taught him. But it also means “orientation” and this is what he was to learn from the poppy: to cyclically rotate after the sun, from dark to light. Furthermore, he had to transform in energy the whole “sap” of his being and after that, with its help, to aspire towards this. 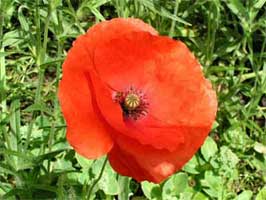 Sometimes, this orientation towards good, beautiful, light, truth made him blush like a poppy. Like God’s “wonderful light”, it was the light of an open look accompanied by a smile, waiting for a certain scent from him…he also learned that the poppy always had its scape straight in order to orient itself better, so he began keeping his spine straight.

At the beginning, he did not understand very well how things really were. He read in other books on filocalie that the monk’s spine must be a little curved, with the risk of pain – this way, his look could be easily oriented towards light. So, he asked Father Seraphim for an explanation. Father Seraphim looked at him maliciously: “Oh, this piece of advice was good for those living a long time ago. They were too full of energy and they had to be reminded about humility and the nothingness of their own human condition. Thus, if they leaned a bit during meditation it could not hurt them…regarding yourself, you would rather need energy; that is why, during meditation, redress yourself, be vigilant, straighten as much as you can your spine and raise your look towards God’s light; you can see this light on the top of your head, but remember to do this selfishless. If you carefully look at the poppy, you will notice the verticality of its scape and the suppleness that allows it to bend in the wind, yourself; that is because it is always so humble…You must understand that the poppy’s secret teaching is about its fragility and its transience also. The young man that you are now must learn to bloom, but also to fade”. Meditating on what Father Seraphim said, the young philosopher understood better the prophet’s words “any body of flesh is grass for God and its delicacy is like the flowers’; there comes a time when God’s wind blows upon them and grass dries, flowers fade; but above all, God’s word lasts forever…for God, all peoples on Earth are like the drop of water in the bucket, like dust on a balance…He makes all judges in this world eternally insignificant. They are hardly sowed, cropped, with their scape in the ground, and He (God) blows upon them and dries them and then a swirl takes them like straws.” (Isaia, 40-7, 8, 15, 23, 24). 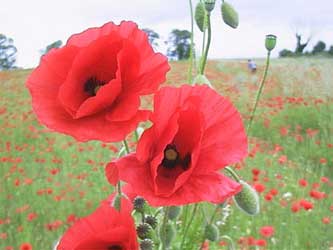 The mountain gave the sense of eternity to the young philosopher, but after that, the poppy taught him the fragility of transient things, which obey time. To meditate means, among other things, to know Eternity in Transient moment anytime. It also means it is necessary to fully bloom when your time to bloom has come, to love with all your heart when your time to love has come, without taking anything in return; besides what God gives us every moment what else could we receive and from who? Let us think at the reason why poppies bloom…and for whom…

The young philosopher learned thus to profoundly meditate without any purpose or profit; he also realized he must meditate from the simple joy of existing, loving God’s eternal light. “Love is its own reward” said Saint Bernard. “The flower blooms because it blooms” said once Angelus Silesius.

“The mountain is actually the one blooming like a poppy” thought the young philosopher. “The whole universe is meditating now in me. May it blush with joy in this privileged moment that is my life”. That thought was a little to much for him. That was why Father Seraphim had to take him and shake him a little bit, took him on an abrupt road and brought him towards the sea shore, in a small isolated gulf and told him: “Stop chewing the freshness of a poppy like a cow…remember you must get a marine heart now. Learn how to meditate as the ocean”.

Meditating as profoundly as a mountain