On Solstices and Equinoxes

It is hard to say precisely when the “beginning” of this topic can be set in the history of the human culture and civilization. We can assume, however, that absolutely all the great civilizations of the ancient world that knew a special development of science and spirituality were focused on the permanent observation of the sky, and the fact that where astronomy flourished, also astrology developed.

Dr. S. Madhavan, scientist, astrologer and astrology researcher, in his book, Muddle of Ayanamsa (Controversies around Ayanamsa), aiming to bring in the concept of precession of the equinoxes as clear as possible, makes a very necessary and interesting history of the interest which, over centuries, these important celestial points raised to astronomers and astrologers.
Solstices and equinoxes are, astronomically speaking, places where the Sun’s apparent race, called the ecliptic, crosses or distances to the maximum from the celestial equator. This occurs because the ecliptic is tilted by 23°27′ to the plane of the equator, which makes the sun: 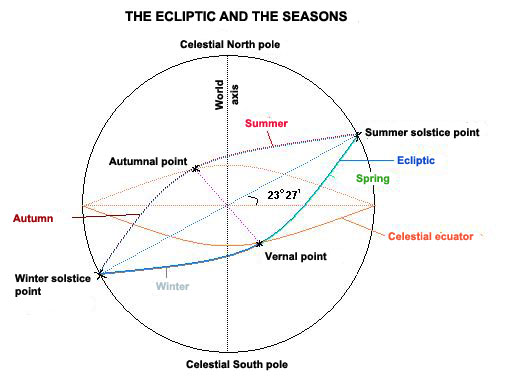 The vernal equinox is the point where the Sun passes from the south latitude to the north latitude of the celestial sphere, while the autumnal equinox is the point at which the Sun passes from north latitude to the south latitude of the celestial sphere.
From the vernal equinox the Sun rises on the ecliptic till it reaches its highest point at the summer solstice, when we have the longest day of the year. Once the northernmost point of its apparent motion is reached, the Sun begins to descend on the ecliptic reaching its most southern point at the winter solstice, when we have the longest night of the year.

Solstices and equinoxes mark the seasons and the astronomical beginning of the seasons, and because of them, calendars appeared subsequently. Solstices and equinoxes are also the base of the tropical year, meaning the astronomical year that takes into account the Sun’s motion through the zodiacal belt (the zodiac of the 12 astrological signs), from the zodiac sign of the Aries to the zodiac sign of the Pisces. Babylonians, Egyptians, Greeks and Indians have studied the apparent motion of the Sun on the ecliptic and they discovered the phenomenon of precession of the equinoxes which we will discuss in another article.

At the end of so many centuries of dispute and astronomical research, exceptionally summarized in the work mentioned at the beginning of this article, Prof. Dr. S. Madhavan concludes:  “It seems that the sidereal system (nirayana) was used in astrology with predictive purposes, whereas the tropical system (sayana) was used in astronomy to observe the equinoxes and solstices.”

Since any astronomical reality has an astrological “reflection” and also a spiritual significance, solstices and equinoxes are known in the Vedic astrology (Jyotish) under the name of Gandanta. Gandanta is a word of Sanskrit origin, coming from Gand – “knot” and anta – “end”. It means “karmic knot” or “spiritual knot”. Gandanta represents, in a native theme, the junction points where the monthly and the solar zodiac meet, these points being directly associated with the moments of inner growth or spiritual leap.

The Moon or the Ascendant positioned at the moment of birth in an orb 00°48′ to these points is a Gandanta, a “spiritual knot” which, at some point in life, has to be “cut” (meaning that the native will have a major spiritual test completed either with a real spiritual leap or with a spiritual failure).
Although the Gandanta points are not at all solstices and equinoxes, they are energetically identical to them and can be considered similar.

The solstices and the equinoxes represent  the entrance of the  Sun in the space corresponding to the cardinal signs which, in their turn, correspond to the cardinal points (Cancer – North, Aries – East, Capricorn – South, Libra  – West). Cardinal zodiac signs have the Fire Element nature, their energy being able to generate, to direct, to lead.

The successive transits of the Sun, symbol of the Divine Self Atman in the Vedic astrology, through these zodiac areas and through any of these 7 (4 +3) points of hiatus, signify the stages of evolution of the human being which, at the moments of solstices and equinoxes, is permanently “infused” with sublime, elevated, divine energy, in order to expedite its completion. 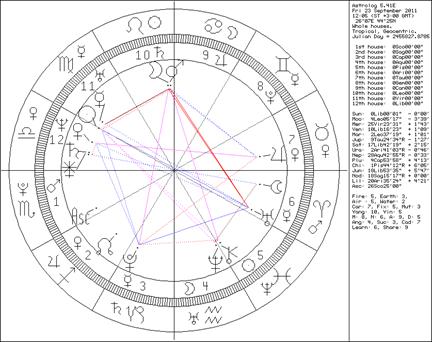 The autumn Equinox occurs at 12:05 (+3h00GMT) local time, important astral moment when the sun enters the zodiac sign of the Libra. It is a moment of balance between opposing polar forces of Yin and Yang, when the resonance with the macrocosmic energies of Harmony, Beauty and Divine Love starts to amplify. The most important lessons during the solar transit through this sign will be those of complementarity and cooperation, of the goodwill and concessions, of moderation and prudence in action, the elevation and our refinery through culture and art. Well learned, these lessons can ultimately become the “fuel” for real and final spiritual leaps.
It is a very special autumn equinox because it takes place at midday, moment that  balances the midnight, so when the Light is at its peak and overcomes for good the forces of the darkness, this balance enhancing the energy of equality between the duration of day and the night.

Also, the equinox is very special because it occurs in a Friday, a day ruled by Venus, the governor, in fact, of the zodiac sign of the Libra. Moreover, at this time, Venus is located in its daytime solar home, of yang energetic polarity, namely the zodiac sign of the Libra. In other words, we are part of a deeply Venusian autumn equinox, in which the resonance with the sphere of the Great Cosmic Power Tripura Sundari reaches its peak, enhancing the artistic sensitivity, aesthetic maturity, creative manifestation, divinely inspired creativity, good taste and the communion with the universal emotional plane.

Because Venus has covered only a third of its diurnal Sign, all these qualities discussed here will experience a gradual increase as the planet moves in the Sign, and between October 4 to 9, when it will go past the last 5 degrees of the zodiac, those qualities will reach their maximum and we will already reap the fruits of the behavioral features mentioned above.

It is best therefore to start during these days – whose spiritual value will be enhanced by the Shiva Ratri moment (Sunday, September 25) – healing treatments and purification techniques, long-term practices and spiritual techniques, writing or development of pieces of art or the realization of our creative abilities. The relationships that start, or are re-launched or enforced in this Venusian interval will capture, assimilate and express the environment in which they manifest harmony, charisma, power of transformation, energizing of the ambient and beauty.