SHIVA, in the hypostasis of divine sovereign of the mysterious, fundamental energy of life 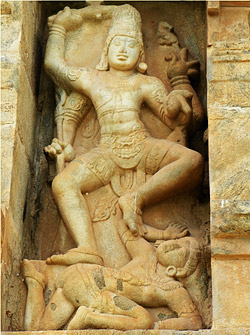 In this hypostasis, SHIVA reveals himself in particular as a destroyer of the god of time, KALA. This is also a terrible hypostasis, VIRAMURTI, of SHIVA, in which SHIVA KALARI penetrates with his spear the god of time, KALA, who is responsible for the death of human beings. Since KALA is time, the hypostasis called KALANTAKA or KALARI means the aspect that, in fact, SHIVA is above time and that he, SHIVA is eternal and not subject at all to the laws of time. SHIVA KALARI is one of the most important hypostasis of the divine game, LILA, of SHIVA.

A large number of stone representations of this terrible hypostasis are located in the great temples of Southern India. This terrible hypostasis of SHIVA is intimately associated with the young Marcandeea who was the son of the wise Mricandu and his wife, Niati, she being the daughter of the mythical mountain – Mahameru. Marcandeea was born as a reward for the uninterrupted devotion of Mricandu.

Below is the symbolic story that is presented in the PURANAS, which offers us the foundation of this hypostasis of SHIVA, SHIVA KALANTAKA. The wise devotee Mricandu had not had any son for a very long time. For this he realised a long TAPAS to obtain the divine blessing and support of SHIVA, imploring Him to offer the gift of a son. Then SHIVA appeared before him saying that he will answer his request. SHIVA then presented the wise man two possibilities: The first was to have a son, disobedient, cruel and stupid, but that would live a long life, and the second was to have a loving son, intelligent and with an exemplary character, but whose life was to be brief. The choice was, therefore, between a son with a long life, but weak from a spiritual point of view and a son full of spiritual virtues, but with a short life.

The wise Mricandu chose, without hesitation, the second possibility. Shortly afterwards, his wife gave birth to a particularly beautiful boy, whose name was Marcandeea. Offering him this favour, SHIVA also told the wise man that the duration of his son’s life will be 16 years. The boy grew up until he became a handsome boy, and being highly intelligent and devoted, he learned very quickly the sacred science of the loving worship of SHIVA. Marcandeea worshipped SHIVA every day, carefully reading the sacred texts, realising spiritual rituals of worship of Shiva and was filled with a great love and devotion to SHIVA.

His parents were very pleased with him and were very happy to have such a treasure of the boy. On the day when he became 16 years of age, Marcandeea found his parents crying. On this occasion, he learned from them that on this day he was to die and that this was the cause of their pain and grief. Being highly intelligent, Marcandeea realized immediately that nobody, outside of SHIVA, who was permanently beyond any transitory or temporal aspect, even beyond death, which is precisely why he is worshipped as the divine conqueror of time, NITIUMJAYA, could save him from the deathly embrace that was very close to him.

When the 16th year of his life was nearing its end, Marcandeea was seated in the sanctuary of his family, in front of the sacred symbol of SHIVA, the LINGAM, entering into a profound state of frenetic worship, which also was full of sincerity towards SHIVA. Being very firm in his devotion to SHIVA, he began to do SHIVAPUJA and then, shortly afterwards, abandoned himself completely to the supreme will of SHIVA.

YAMA, the God of death came to take the boy’s life, as was necessary, however,seeing Marcandeea so full of devotion to SHIVA, the god YAMA, almost as if frightened by the intensity and inflinching devotion of the boy to SHIVA, withdrew. Then the god of time himself, KALA, came personally to take the boy’s life. The young Marcandeea was not scared at all by the terrible KALA and he did not weaken the intensity of his devotion to SHIVA at all, embracing still, full of adoration, the symbol of SHIVA, the SHIVA LINGAM, with both arms even in that moment of existential crisis. Because the god of death, Kala, continued to insist on taking the life of the young Marcandeea, who continued to worship SHIVA with a great fervour, SHIVA arose instantly from his symbol, the LINGAM, in a terrible hypostasis, striking KALA ceaselessly with his spear.

SHIVA in the endless being of which the pure mind of the boy was completely absorbed, banished immediately also YAMA, who was nearby, because death cannot penetrate the one who has already become, because of an endless love, one with SHIVA. Being very pleased by the exemplary devotion and love of the young boy of 16 years, SHIVA offered him the divine gift of always being 16 years old and, in this way, he was absolved from death. He thus blessed the sincere, unflinching devotion, offering the priceless gift of eternal spiritual youth.

That is why this hypostasis – SHIVA KALANTAKA is also known as the hypostasis of the divine master that offers the gift of eternal spiritual youth, KALANTAKA MURDI. Then the gods asked SHIVA to forgive KALA. Being full of compassion, SHIVA restored KALA’s life, drawing his attention to the fact that from now on he may no longer disturb his devoted worshippers.

This story hides, in fact, a particularly deep significance. Death was created by SHIVA to impel human beings to accelerate their spiritual search. However, when the love for SHIVA is ignited and burns with a  great intensity in a sincere and devoted being, death no longer has, especially then, any power. Death is then banished by SHIVA from the path of such worshippers of His, and they receive from SHIVA the priceless gift of eternal spiritual life. In this way, such a worshipper who is blessed with the grace of SHIVA, easily discovers, even in their being, what is the mystery of the mysterious fundamental energy of life, whose source resides in the supreme being of God the Father.

In Indian iconography, SHIVA KALANTAKA is usually represented as having a single head, three eyes, the third of which is AJNA CHAKRA and slivers of bright hair are arranged in a crown JATAKMAKUTA. The colour of his body is bright, just like that of coral. In some representation of this hypostasis, SHIVA KALANTAKA has eight arms, bearing the spear, lance, battleaxe, PARASHU, his symbol, VAJRA and sword on the right side. On the left side, he keeps it in two of his hands the shield, KATARKA and rope, PASA and in the other two he makes the gesture of surprise – BISMAYA MUDRA and the one of divine correction and impulse, SUCI MUDRA.

In accordance with descriptions from the works, UTARA KAMIKA and PURVA PARANA, his left leg is placed on the ground and is slightly bent, while his right leg is raised off the ground. His raised leg is supported on the chest of the god of death, KALA. SHIVA’s gaze is directed, in the case of this hypostasis, to the body of KALA.

SHIVA KALANTAKA’s nose is pointed, and the mouth should be represented as having fangs. The god of death, KALA is represented as having fallen to the ground, with an expression of great fear on his face. His face is horrified: he looks at SHIVA in merciful way, asking forgiveness. On the other hand, young Marcandeea is represented alongside by a symbol, the LINGAM, from which is manifested the strength in SHIVA. Marcandeea’s face is orientated towards the floor, his hands are close in the position of humility, holding also in them flowers as offerings.

The whole picture, that corresponds to SHIVA KALANTAKA, is terrible, SHIVA emanates an extraordinary force of domination, suggesting, through his firm attitude, the enormous support he grants to all those who are truly devoted and who are full of spiritual courage, exactly as was young Marcandeea.

Here, finally, a description of this terrible hypostasis of SHIVA: “Having an intense red colour, with three eyes, of which the third is the spiritual eye, AJNA CHAKRA, with firm shoulders that support the four epochs of the spiritual evolution of human beings, the YUGAS, with hands that keep the spear, rope and axe, with some terrifying teeth, however, with a smiling face, with an expression of divine detachment on his face, SHIVA KALANTAKA  firmly holds his left foot on the chest of the god of time, KALA.

He is presented as the absolute sovereign of time, and death and also he reveal himself to us as the divine master and protector of all devoted and courageous worshippers. Confronting death with a great courage, SHIVA KALANTAKA manifests in the hypostasis of the divine sovereign of the mysterious fundamental energy of life.”

The mysterious aspects of SHIVA