The King of the World

Aniruddha, the current King of Shambala, as depicted on a late 17th century Thangka : 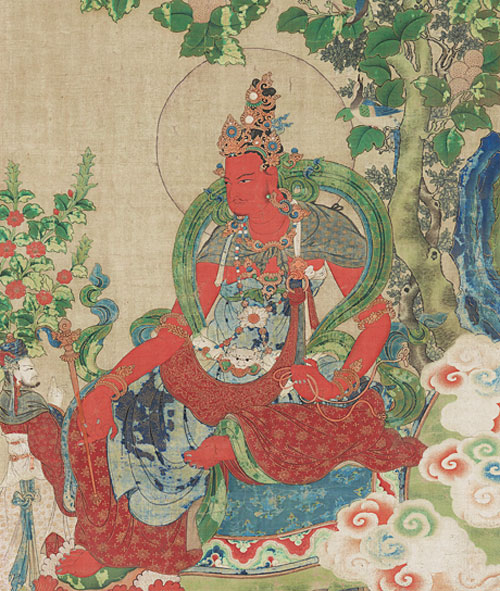 The current King of Shambala also has, besides his fundamental role, a historical role which is entirely special, because during his reign, we will pass from Kali Yuga to Satya Yuga (the age of maximum spiritual prosperity). The King of Shambala is the one who supports this gradual process of transformation, he is the one who inspires authentic spiritual currents and thanks to his special role that the Romanian people will have in the future regarding the passing of humanity into Satya Yuga, it is definitely that he is one of the protectors and divine inspirators of the Romanian people.

He will lead the forces of good into the final battle

A traditional Tibetan image of a prophetic nature depicts the final battle between the forces of good and evil: riding a horse, leading his army, the King of Shambala will shatter the negative forces who took control over our planet. This decisive battle between good and evil will take place, as they say, mostly in subtle realms, during the times that we’re experiencing now – the end of Kali Yuga. Saint-Yves d’Alveydre, in his posthumous book “India’s mission in Europe” calls the King of Shambala, the “Pontiff”, Brahatmah, translating this title through: “The one supporting the souls in communion with the Spirit of God, the Father”. Here is a fragment from the book of Saint-Yves which describes the King of Shambala:

“With the exception of the greatest initiates, no one has ever seen the face of the Pontiff. Still, on the occasion of certain exceptional ceremonies, for example the one at Jaganath, he reappeared before everyone present, clothed with a splendid suit, riding a white elefant. His entire being, head to toe, was radiating a blinding bright light which surrounded him in magnificent sparks. The traits of his face could not be perceived distinctively due to the many diamonds on his tiara, reflecting sunlight as fire. The ceremonial suit of Brahatmah is adorned with the fundamental symbols of sacred science which stands at the basis of the hierarchical organization of Shambala. Thus, his different vestments are marked with groups of magical letters (mantras). On his chest, there are some symbolical jewels which are consecrated to the archetypes of the twelve zodiac signs. The pontiff can perform anytime, at will, the miracle of spontaneously light the sacred flame on the altar, in the way that Aaron and his successors did. His tiara, made of seven overlapping crowns and adorned with sacred glyphs symbolizes the seven planes of manifestations, the seven levels on which souls ascend or descend, crossing the divine Splendors”.

Shashiprabha, the Fourteenth King of Shambala, as depicted on a late 17th century Thangka: 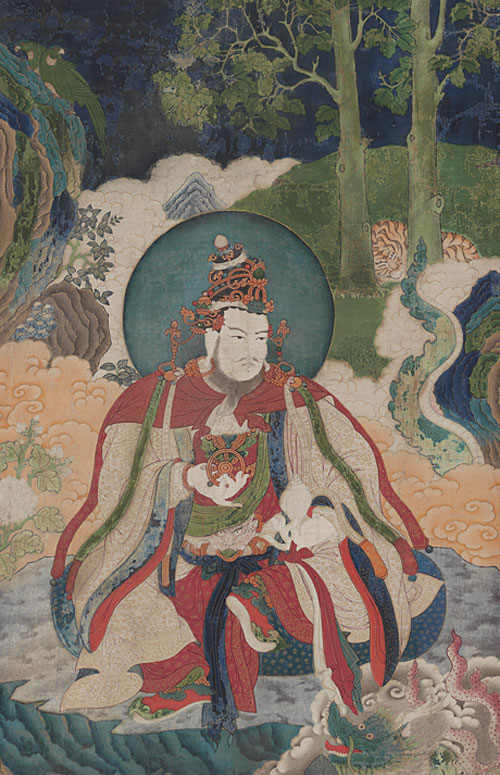 There are similar occurences of the King of Shambala which have been described by Ferdinand Ossendowsky in his book, “Animals, people and gods”:

“During the sacramental celebrations which were based on the old type of Buddhism in Siam (Thailand) and India, the King of the World showed himself five times. He was in a magnificent chariot pulled by white elephants, adorned with gold, jewels and soft silk; he wore a white cape and a red tiara on his head with rivers of diamonds hanging from it, hiding his face. He blessed the people with a golden apple with a lamb on top of it. Blind men would regain their sight, deaf men would begin to hear, the crippled would begin to walk and the dead rose from their graves. He was seen once again at the end of the 18th century at Erdeni-Dzu, then he visited the old monasteries in Sakkia (in Western Tibet) and Narabanchi Kure (in Mongolia). The Live Buddha (the leader of Mongolia) and Tashi Lama received a written message from him, with unknown letters on golden plates. Nobody could read those signs, but Tashi Lama, entering the temple, placed the plate on his head and began to pray. Due to his prayer, the thoughts of the King of the World entered his mind, and without having read the enigmatic inscriptions he understood and fulfilled their message.”

When the King of the World prays

“All throughout the year, the King of the World guides the priests’ missions in Shambala. But sometimes, he walks to the cave of the temple where the embalmed body of his predecessor lies in a black rock coffin. The cave is dark, but when the King of the World enters it, its walls illuminate with rays of light and tongues of fire come out of the coffin’s lid. The eldest of the priests walks before him, with his head and face covered and his hands crossed on his chest. This priest can communicate with the souls of the departed.

The King of the World utters incantations for a while, then comes close to the coffin and puts his hands over it. The flames intensify their brightness; the mysterious lights on the walls burn out and reappear and they begin to describe the mysterious signs of the vatannan alphabet (the sacred alphabet of those in Shambala, n.n). Translucent rays of light emerge from the coffin, barely noticeable at first, but then they become brighter and brighter. These are the thoughts of his predecessor.

Tejin, the Third King of Shambala, as depicted on a late 17th century Thangka : 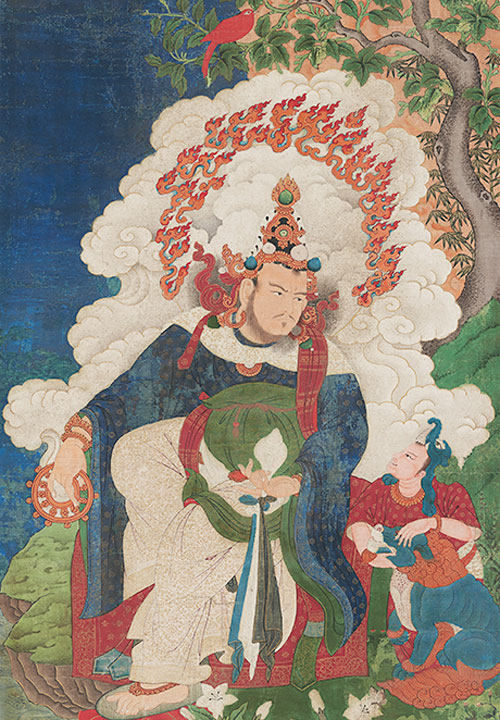 Then the King of the World enters the great temple and prays in solitude. Fire lights up on the altar and spreads gradually to the altars around and, through the incandescent flame, God’s face arises. Filled with veneration, the King of the World tells Him of the decisions of the Council and receives celestial orders in return. Upon exiting the temple, the King of the World is crowned with divine brilliance.” Ferdinand Ossendowsky, a fragment of “Animals, people and gods”.

The gold of an ancient Indian God

My sincere aspiration to find an authentic spiritual guide, finnaly received an…