My sincere aspiration to find an authentic spiritual guide, finnaly received an answer


Destiny sent me on a date with
YOGA

When I was 21 years old, I started to practice YOGA on a daily basis.  A whole practical world exposed itself in front of my eyes.  After a year of practice, a thirst was awoken inside of me to search after a teacher from a different kind, a teacher that has already reached the spiritual peaks. A teacher that could speak of enlightenment and of the spiritual liberation, out of his own direct experience.

In the end of my army service I worked for a while in the Hi-Tech industry, I saved some money and went to travel abroad. While I was in Australia, I experienced a number of powerful mystical experiences, and at the peak of one of them I received a strong insight, that called me to leave everything and go to India. Indeed I left and landed in Thailand, with a firm intention to buy a ticket to India as soon as possible.

In my first morning in Thailand, I reached a restaurant and I sat at the same table with a few Europeans.  They were practicing Yoga and were on the journey of producing a spiritual documentary movie. I immediately felt a profound connection with a woman that was among them. Since she was with her boyfriend at that time, I could not share my emotions with her, so when she left, I felt that I should sit and wait there for her. So I waited in the restaurant from the noon time until the night, and at night she happened to walk by herself next to the restaurant. I jumped towards her and told her that I waited for her for hours, of course she laughed and didn’t believe me, but very quickly a very deep soul to soul conversation developed among us and eventually I asked for her mail. I found out that she was from Romania, and I told her that in one of the meditations I’ve done in the past, I had the intuition that my Romanian roots are meaningful and in the future I should live in Romania for a certain period of time. After that I continued to India but I kept on an occasional contact with her in the mail.  However the connection in the heart grew and increased.

A year afterwards I went to Bucharest, to meet her. I visited her in the ashram in which she lived already for a few years.  She presented to me her spiritual community and I was amazed to discover in a country like Romania a spiritual community of that size. There are thousands of Yogis which are spread in communities in almost every city in Romania.  In Bucharest alone there are a few dozens of ashrams in which hundreds of Yogis are living to a pretty intense spiritual atmosphere. They practice at least 3 daily hours of Yoga and meditation, and they have a spiritual aspiration as such as I haven’t met until then. 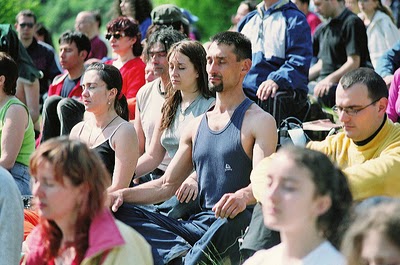 I asked the people there about Grieg and almost each one had told me of a small miracle that happened to him with Grieg. It touched my heart but I wanted to discover it by myself. Grieg was already out of Romania when I arrived, so I just took a picture of him and looked at it for some time, and out of this contemplation I felt many things floating and coming up to the surface. Sensations arose in me that suggested that he was the voice that called me to leave Australia, a year before that.

I immediately felt his spiritual greatness and recognized his mission as a spiritual guide, but it took me quite a time afterwards and many more experiences until I completely received him as my spiritual guide. Indeed I didn’t have doubts in Grieg as a spiritual guide, but the receiving of him as my spiritual guide took place gradually. One of the main jumps was in my first participation in the Yoga camp in the town Costineşti on the shores of the black sea. To see thousands of people who are uniting for mass meditations and trying truly and sincerely to find the eternal spark that exist inside of us, excited me a lot, and I was grateful to Grieg for the spiritual field of the camp and for the infinite wonderful states of consciousness that he humbly offered to each participant of the camp. In that time I made a vowel to do whatever I can to help him, just as he lets God to guide him.

I joined the Yoga course in Romania and I found out that it is a weekly course which is continued over 21 years!  In addition to the Hatha Yoga lesson (yoga positions and breathing techniques), every week we study something new.  In the first year I studied the Yoga positions from their spiritual point of view – each position is connected to a certain Chakra and a certain emotional state. The courses, which were written by Grieg, combine knowledge from different spiritual traditions which were collected into an impressive synthesis, which is emphasizing their common aspects and the practical aspects of each spiritual path.

I didn’t believe that there still exist schools as this in the world, in which you can study the depths of mysticism and metaphysics and to study how to apply them in such a way which is gradually giving remarkable results. The courses filled my thirst to understand theoretically the spiritual world. Many things became clear and useful only when Grieg put them into the right context. But more than the theoretical knowledge, the practice which is offered in the course filled my thirst to finally experience, breathtaking and meaningful spiritual experiences.

One of my most favorite meditations is a spiral-meditation, in which sometimes there are thousands of Yogis, while they are holding hands, arranged according to man-woman and according to the zodiacal signs, and they are meditating with the state of the spiritual liberation through the divine miracle. In this meditation I sometimes feel an immense transcending sensation and a great closeness to God, a feeling that is accompanied with inner peace and great happiness which remain for days and even weeks afterwards. After one of the most special meditations I’ve done with Grieg, I tuned and telepathically emitted to him exactly what I felt; A week afterwards I received from him a gift of a few movies which were all related to the experience that I had. 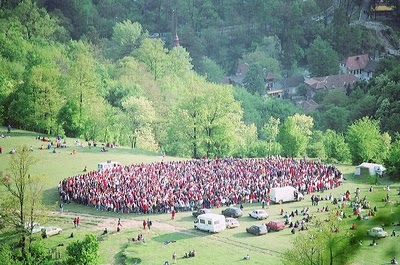 I liked the school a lot and after a year and a half of visiting, I moved in Romania for a period of one year, where I found another 10 Israelis that received me. Afterwards I returned to Israel and I currently study the third year of the course in video conferences over the internet.

With the practice which is studied in the course, I study to control better and better my sexual energy and together with my beloved one we are walking on the Tantric path. Our couple relationship is by itself a spiritual path, and loving her is one of my most meaningful spiritual practices. Together we are studying to maintain and sublimate the sexual energy while avoiding ejaculation and wasting of the sexual secretions. That same energy we are arising into higher energetically centers (Chakras). In this way the energy and the sexual attraction transformed in our couple relationship into a spiritual fuel and engine.

Until then I didn’t know how to bridge between the spiritual aspiration that was taking me higher, and the sexual desires that were sometimes throwing me into all the directions. Through Tantra I studied that these two forces are not contradicting but completing one another, and that with skill, practice and a great love it is possible to give the right direction to the sexual energy which is transforming itself into a spiritual energy. And the spiritual energy on its turn is sanctifying the sexuality.

There are spiritual teachers with their heart open and they are radiating with true love. Another kind of teachers reached profound understanding and they are guiding with wisdom; some teachers are full of energetically power and their mere presence is uplifting and magical. In Grieg I found all of these, but above all, he simply and humbly directed me towards my real self and reminded me again and again of what is really important in life, above all the masks I had built and deeper than my superficial tendencies and attachments.

The King of the World