The meaning of the name of Tripura Sundari

Tripura can be translated as “that which comprises the three cities”, “towns” or “cities” being a metaphor, because in reality they refer to the “three worlds” or gigantic spheres of God’s creation which are: physical, subtle (astral) and causal world. 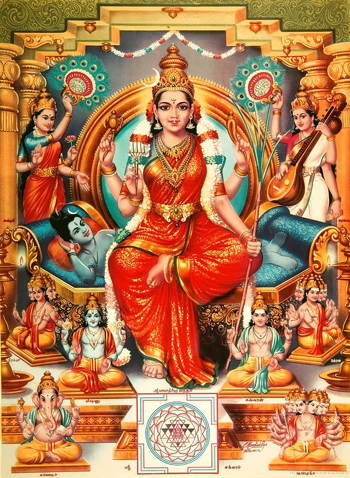 Due to the perfect identity between the structure of the human microcosm and the Macrocosm, these “three cities” can be associated, respectively, to the three main bodies or shells of the human being: physical, astral and causal body.  From another perspective, the significance is that of the sovereignty of the goddess over the fields of the material, energy and thought at the level of the whole creation. In addition, this grand manifestation of the Great Cosmic Power Tripura Sundari means, based on a perfect analogy and on the three fundamental states of consciousness of the human being: wakefulness, sleep with dreams and dreamless deep sleep, which are symbolized in the Tantric traditions by the firelight, the Moon and the Sun.

Therefore, Tripura Sundari is the gigantic and brilliant sphere of divine consciousness that permeates all the experiences of the three worlds of Creation but at the same time transcends them entirely. The first “walled city” of the goddess is considered, as we have said, to be the wakefulness state, where the human being experiences different sensations and experiences through the main five senses; in this case, the tantric tradition states that the location of the individual conscience is at the level of the right eye or in the forehead area, between the eyebrows. The second “walled city” of the goddess is the state of sleep with dreams associated with Vishuddha chakra, in which the individual consciousness is centered in the mind. The third “walled city” is suggested by the dreamless deep sleep state, associated with Anahata chakra, in which the individual consciousness merges with its essential divine nature. Being the sovereign goddess of the three main states of consciousness, Tripura Sundari is at the same time the fourth state of consciousness (turiya) that transcends the others and is associated with a state of divine ecstasy (Samadhi) and spiritual liberation.

Tripura Sundari is also known as Lalita or “the one who plays”. Hindu spiritual tradition says that all Creation is the game full of beauty and delight of the Divine Mother. As for us, as human beings we are only transient individuals in this gigantic game of the Mother and to free us from its illusion we must understand what the primary source of energy and power that “moves” the whole Creation actually is. Our sufferings are only illusions, as a direct result of the false knowledge which comes from ignorance and the manifestation of the ego. The aspect is relatively simple: because we stubbornly tend to have control over our happiness or to own it in terms of the false and separate self (the ego), we actually break apart from the real spiritual bliss that is universal. As a correct and pure image of true happiness, Lalita shows us how to exit our error, which does not mean we have to deny our happiness, but we must find it in ourselves. Basically, Lalita awakens our soul receptive to the divine happiness that permeates everything. Lalita is also known as the presiding deity of Sri Chakra, which is the great yantra or “energetic model” that supports the entire macrocosm and comes from the universal subtle sound, which is Pranava. Lalita is considered to be the most beautiful of all deities and she represents the supreme ecstatic happiness, as a source of any other wonderful perceptions. Tradition tells us that she lives on top of Mount Meru (the so-called “cosmic mountain” associated to sushumna nadi in the human subtle structure), supporting and guiding the movement of the entire universe. She is also infinite divine love which is in fact the central and essential motivating force of the existence of the Macrocosm and which also is the original impulse to spiritual liberation from the depths of our hearts.

The Tantric tradition presents symbols threefold: the coarse, subtle and supreme aspect. As far as Lalita is concerned, her coarse form is symbolized by the image of the goddess with four arms; her subtle form is her yantra and her supreme form is her specific mantra. All three aspects together fully define her. One way through which Lalita can be adored and to which she responds instantaneously is through puja. This term is usually translated as ritual practice. There are several forms of puja, based on daily rites, rituals performed for charging certain symbolic objects, rituals performed in festivals and rituals as ceremonies performed according to favorable astrological conjunctures, such as monthly eclipses or when the sun enters a sidereal constellation, continuing with group rituals or rites performed in a couple.

Tripura Sundari is also known under the name Rajarajeshvari or “Governor of all creation” because she is the one issuing “the orders of government” of the Macrocosm and therefore it is very important to always relate ourselves to Sundari and to invoke her grace when we decide to take an important decision in life. However, her orders are not based on arbitrary authority, but they fully respect the free will of every being, being imbued with unlimited divine love. Therefore, all we have to do to get her grace is to sincerely open our hearts to the love that she unconditionally gives us.

To better understand the modes of her action and expression, it is however necessary to gradually eliminate all selfish desires and to love with transfiguration all that surrounds us. From the deeply spiritual perspective of the tantric tradition, beauty and blissful happiness is the fundamental energy of the existence, and the “game” is the very nature of any events. Knowing this, the way to release ourselves from attachments and to acquire true happiness and fulfillment in life becomes much easier. This “spiritual key” is actually a part of the knowledge which the Great Cosmic Power Tripura Sundari shares with us.

Beauty, expression of the divine perfection