The mystery of the crop circle structures 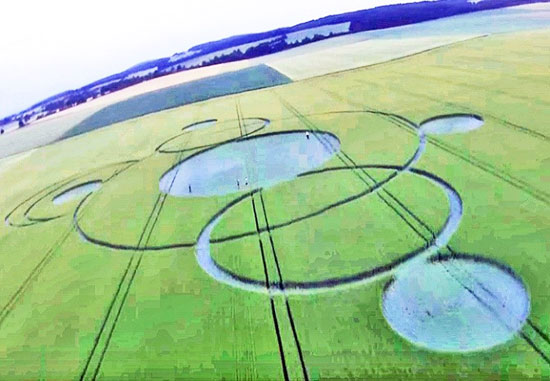 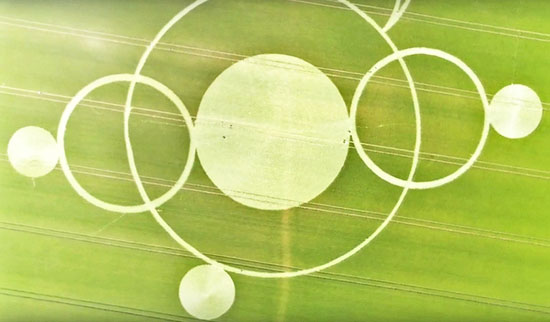 Circular crops, mysterious drawings in the middle of the fields, appeared in the night
of Thursday 1st to Friday 2nd of June 2017, in the Sancerrois. Located on the road of Bourges, at the Briou place in
Crézancy-en-Sancerre, they were spotted by many passers-by who immortalized the scene.

The owner of the land had filed a complaint with the Gendarmerie du Sancerrois because,
contrary to what some think, in his opinion it was not an extraterrestrial phenomenon and it was harming his harvest.

The last phenomenon recorded in the Cher went back to 2009, near Bourges, but similar
cases were observed in the Nièvre and Loiret in 2012. 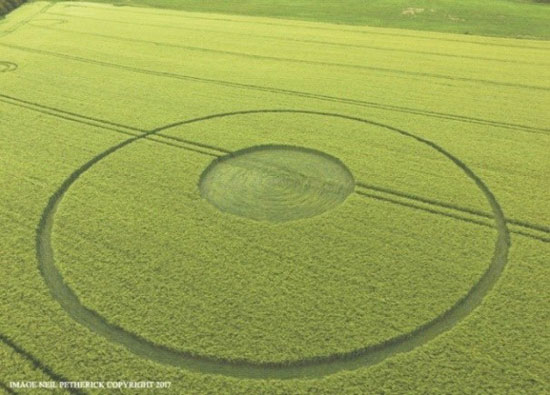 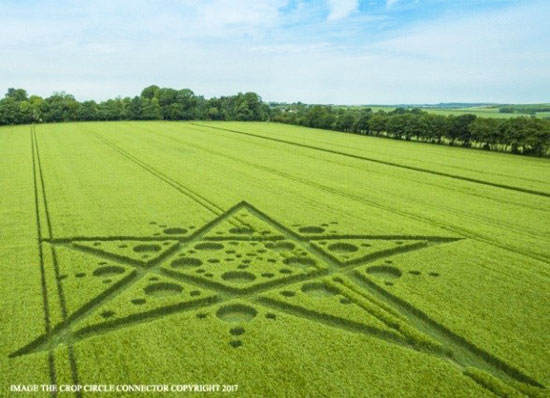 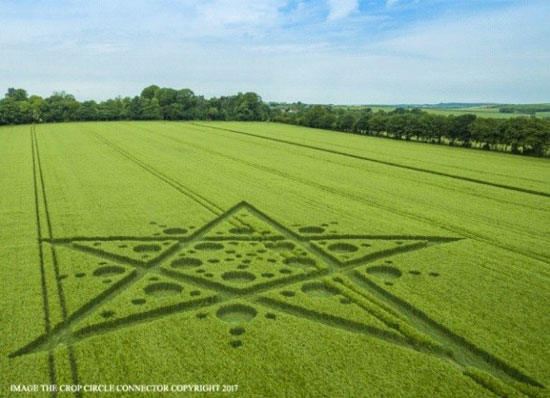 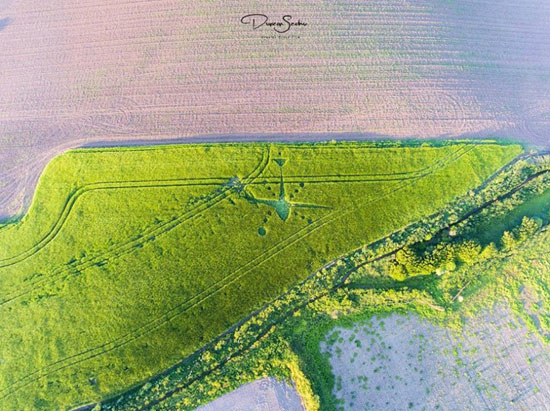 A wonderful photo by Duncan Scobie of a small and magical crop circle in Cornwall, UK,
with the amazing St Michaels Mount seen in the background. 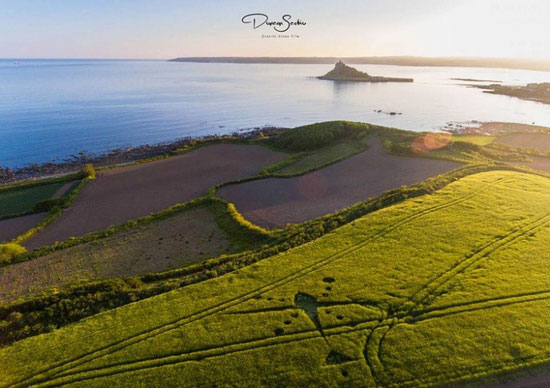 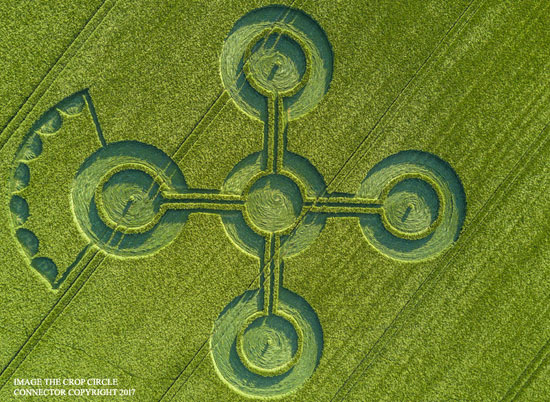 Arcturians explain crop circles: their purpose and how they are
made: 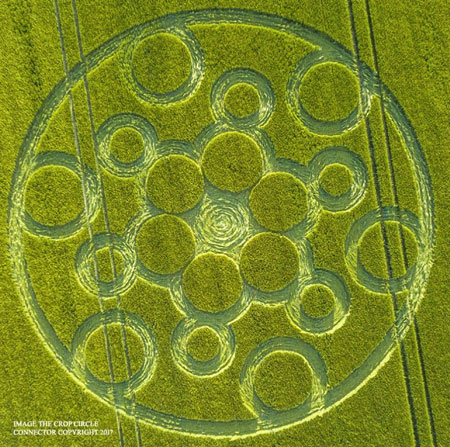 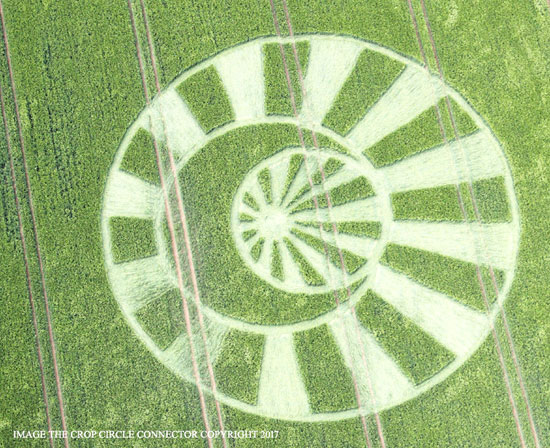 Videos of Crop Circles spoted in 2017 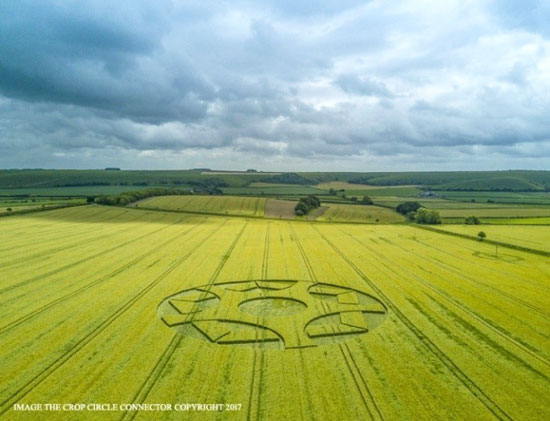 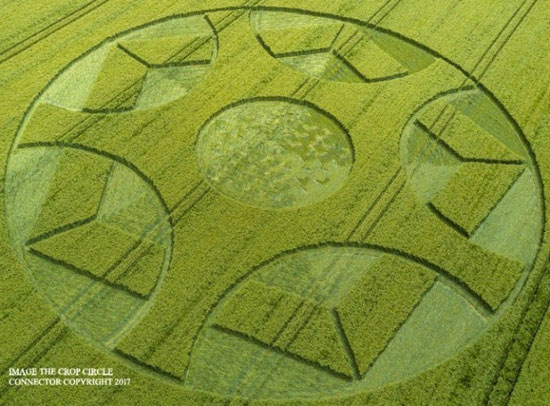 Crop Circle May Be Connected to the Cerne Abbas Giant: 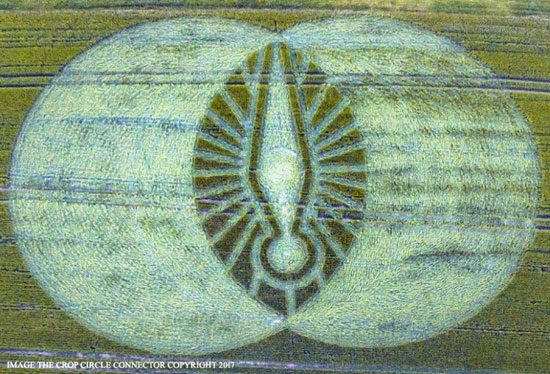 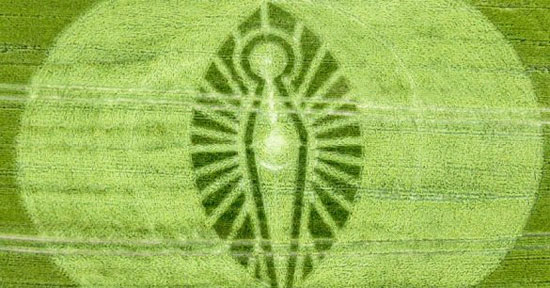 A crop circle which appeared in Dorset, England, is unusual not so much for its shape
but for its close proximity to the mysterious hill figure known as the Cerne Abbas Giant and the earthworks called the
Trendle or Frying Pan. Are these new and old (although that’s a subject of debate) formations related?

The website Crop Circle Connector provides an excellent drone video and close-up
photographs of the crop circle. Both show details of the swirls left when whoever or whatever knocked down the wheat to
create the pattern. The pattern itself is pretty simplistic compared to the more complex crop circles that tend to get them
all of the attention. The comments section of the website contains an analysis by well-known crop circle expert Dr. Horace
Drew, who claims he can decode crop circles, says many of them contain messages from aliens and human time travelers and
professes that he can identify man-made (by today’s humans) crop circles.

Dr. Drew said this one was “paranormally real” (not man-made) and
gives comparisons to its shape and various religious symbols. The intersecting circles looks like a Vesica Piscis,
a symbol for Christ, and the almond-shaped intersection is a popular framing device for surrounding religious icons in many
religions. So in this case, the shape could be a symbol of Christ emitting rays – another popular picture. 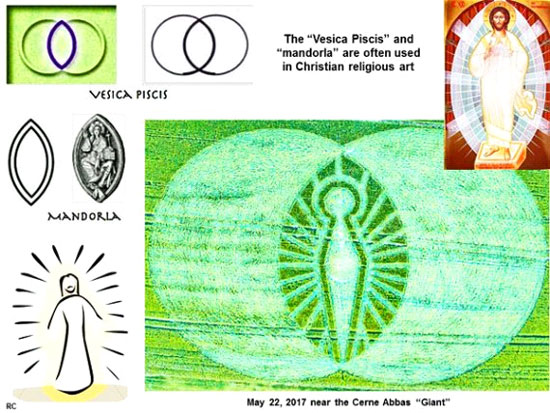 However, the religious aspects don’t necessarily fit with the crop circle’s
close proximity to the Cerne Abbas Giant – whose looks and history are as controversial as many crop circles. The
most well-known features of the crushed chalk outline of a large naked man are his large erection and his large club
– that’s not a redundancy.

While some have tried to date the figure back to Roman times because of its resemblance
to Hercules, it’s not mentioned in historical documents until the late XVII century. An interesting theory is that it
may be a satirical drawing of Oliver Cromwell.

If the crop circle and the hill figure – particularly the giant’s
“lower” club – are related, then the circle takes on the resemblance of a female’s sexual organ.
That would make sense if the crop circle was man-made, but Dr. Drew says it’s “paranormally
real.”

What about the Frying Pan? Located above and to the right of the Giant’s head, the
trendle (which means ‘hoop’) or frying pan would predate a XVII century Giant. Most experts believe it’s
the remnants of a temple and was later used for maypole dancing – a maypole would be erected in its center and
childless couples would circle it in a fertility dance. 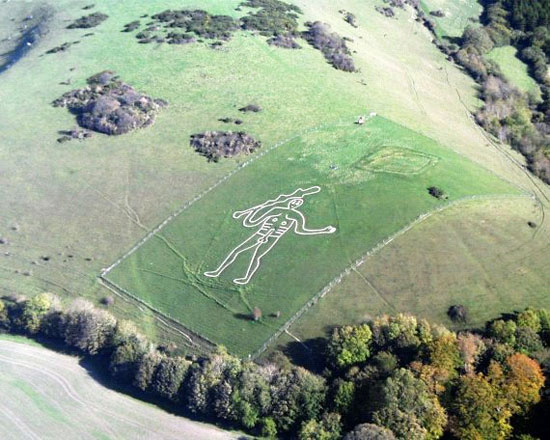 The Giant and the Frying Pan

Erect a pole? Giant erection? Fertility dance? Crop circle in the shape of a female
sexual organ? Despite Dr. Drew’s comment that “For people who think about ‘sensual intimacy’
all of the time, this might seem to be a good theory!” it actually seems like this is the most likely connection
… even for people who don’t think about this all of the time!

Whatever the case and whatever the cause, this crop circle provides a great reason to
call attention to one of Britain’s unique features – the Cerne Abbas Giant – and to ponder why an alien
or time traveler would choose that shape for a nearby crop circle.

Why Women In Their 20s Are Having Fewer Orgasms Than Ever