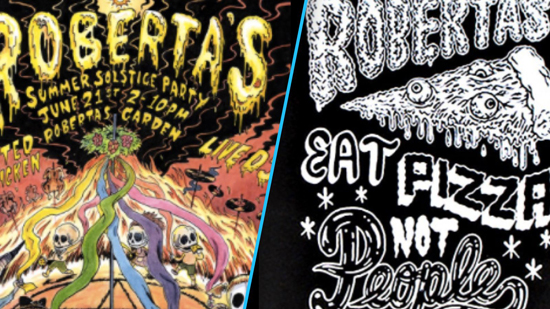 Hillary has claimed that her favourite restaurant in New York is Roberta’s Pizza, and their Instagram page is practically bursting with sinister Cabal images, as videos you can find online reveal.

Again… we urge you not to look into any of this disturbing material unless you have a very strong stomach and some real time to process the emotional shock you will experience.

According to Alex Jones, grown men working for the FBI would cry when they saw the evidence in the seized Clinton emails, and were so scared that they walked away from the case.

Cyrus has created countless Photoshop images of herself with pizza – including an ultrasound of a baby made out of pizza in a mother’s womb.
The Life & Style article leads with a picture of Miley’s head on a swimming baby, with her tongue out, licking at a piece of pizza on a fishing hook.

We are not going to include these images here, just so the overall look of this article is a little less disturbing. A Google Image search of “Miley Cyrus pizza” generates countless examples. Many of these images again suggest a highly sexualized environment around pizza.

Cyrus started out as Hanna Montana, a children’s hero with Disney’s top-ranked show. Then, before she was even of legal age, she shape-shifted into a hyper-sexualized figure, revealing countless examples of Cabal symbolism in her videos.

Under attack by Satan 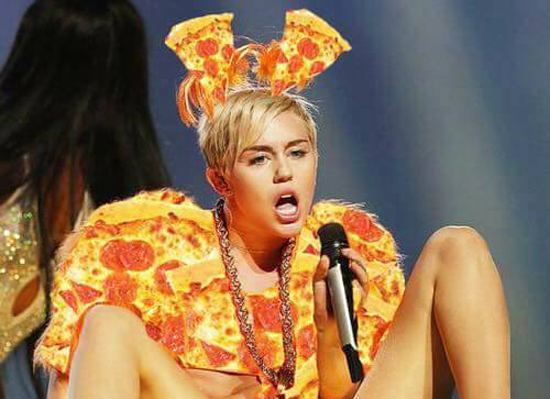 In 2011, Miley’s father Billy Ray Cyrus told GQ that his family was under attack by Satan, and he was scared for his daughter.

In 2015, Miley dressed up as a hyper-sexual baby, complete with a pacifier and baby clothes, in her video BB Talk. The UK Independent deemed this “the most disturbing music video of 2015”.
“Look, it’s probably not worth explaining all the different levels on which an adult woman dressed as a giant baby, sucking her own toes while singing about intercourse, is disturbing…
But, really, did we need to take the imagery to such a nightmarish level?”

Katy Perry is also obsessed with pizza in her music videos. In This Is How We Do, it goes to quite an extreme: “Thankfully, today Katy and her team released a behind the scenes (BTS) video featuring the making of This Is How We Do, which gives us the deems on the pizza bathing suit and more. So much more…
Our favourite reveal of the BTS video had to do, of course, with Pizza Perry.
We were already well-aware of her pizza earrings and bathing suit, but there was more pizza. Pizza we didn’t know about: pizza nails.” 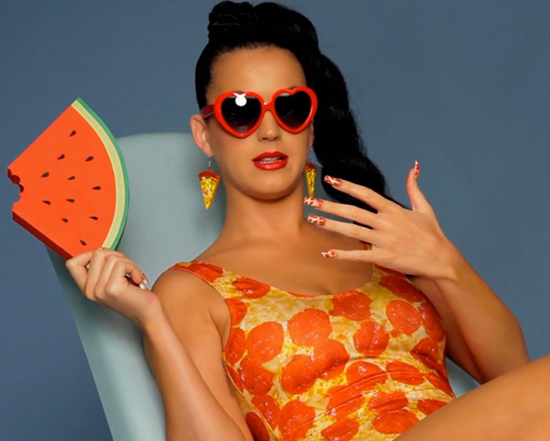 Similarly, MTV.com had an article entitled Katy Perry’s Dedication to Pizza Onesies Makes Our Hearts Melt:
“KP tried to climb the Philadelphia Museum of Art stairs Rocky-style (bless her heart), but got bombarded by fans before she could reach her destination.
(We’re guessing sporting head-to-toe cheese might have had something to do with it.)
Find out how to smother yourself in pizza like Katy Perry …. See Katy wrestle a dog in a pizza costume.”

In this next article from MTV.com, Smother Yourself in Pepperoni Pizza Like Katy Perry, we read:
“It’s no secret that Katy Perry is obsessed with pizza. She’s been spotted wrestling a dog in a pepperoni onesie, taking a nap under a slice of the cheesy stuff, and one time, she even ate an entire pizza while hanging in a bathtub… by herself.
(That’s love, y’all.)”

This is more common among “celebrities” than you might think

Miley Cyrus has also been photographed wearing the same “pizza onesie” and having a pizza comforter on her bed.

Twist Magazine published a 14-part slideshow of celebrities, including Beyonce and Cara Delevigne, wearing outfits that are styled like pepperoni pizza. 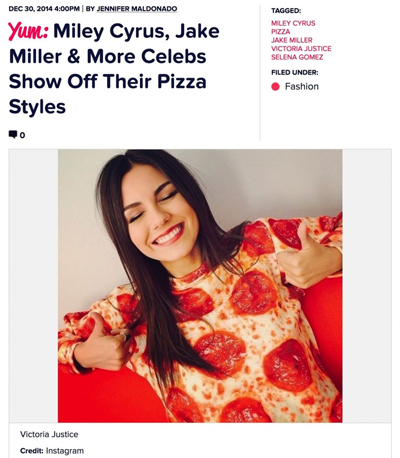 The article is entitled Yum! Miley Cyrus, Jake Miller & More Celebs Show off Their Pizza Styles:
“Some of your other favourite stars, including Jake Miller, Victoria Justice and Selena Gomez have all been spotted proudly wearing pizza-themed outfits!
Click through the gallery to see the fun pics! Just a warning: you might get a little hungry after seeing these clothes.”

For some reason, every outfit and image like this is made of pepperoni pizza – almost never just with cheese alone or with any other toppings.
The pepperoni itself could have an implied phallic connotation.

On May 23, 2016, Lord of the Rings lead actor Elijah Wood said Hollywood’s biggest problem has always been paedophilia. These allegations were covered in Variety, the top Hollywood magazine, among other sources such as the Sunday Times. 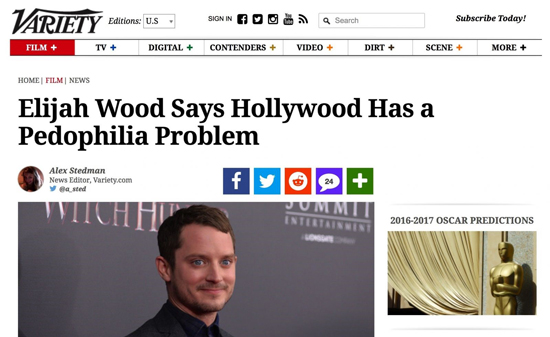 Let’s now read excerpts from Variety, as they are highly relevant:
“The actor, in a new interview with the Sunday Times, is accusing Tinseltown of having a paedophilia problem, saying ‘A lot of vipers are preying on children in the business.’
‘Clearly something major was going on in Hollywood. It was all organized. There are a lot of vipers in this industry, people who only have their own interests in mind’, he said.
‘There is darkness in the underbelly… People with parasitic interests will see you as their prey…’
He added that he’s been ‘led down dark paths to realize that these things probably are still happening’.” 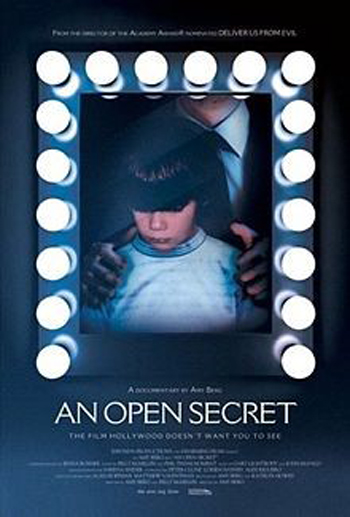 Amy Berg’s documentary An Open Secret revealed the full scope of the problem, and was completely squashed by the Establishment after its premiere.

It was only shown in nine theatres in Denver and Seattle starting on June 5th, 2015, and was quickly removed.
It eventually got distribution by cutting it from an R to a PG-13 rating, long after the “buzz” had worn off.
However, it now seems to be impossible to find, except through bootleg copies on YouTube.

Macaulay Culkin was one of Hollywood’s most visible child actors in the 80s, such as through the Home Alone movie series.
In 2012, he formed Pizza Underground, a band singing Velvet Underground songs where the lyrics were changed to be about pizza. Velvet Underground openly advertised heroin use in many of their songs. 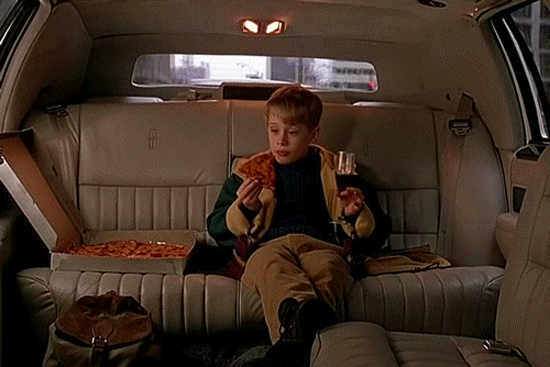 Pizza Underground released a music video in 2013 and actually toured North America with this odd concept. They wanted all interviewers to submit pizza-related questions only.

Eugenia Williamson, a freelance writer working for top publications, decided to submit her five pizza-themed questions – and included sexual innuendo in them, such as a sausage sitting on a pizza.

Her questions then featured what she admitted to be “increasingly inappropriate” references, such as to Michael Jackson’s Neverland Ranch.
Many believe Macaulay Culkin may have experienced child sex there.
An enormous backlash from the media occurred, nearly ruining Williamson’s life in the process:
“Civilians, journalists, famous comedians like Nikki Glaser, comedy fans: all came out against me, saying I was bitter, a failure, jealous, fat, a terrible journalist, a terrible person, a b–h, an a–hole,… that I would rot in hell, that nobody would ever take me seriously again…”

“Since Pizzagate, I have formulated my own story about why those 300 words caused so much antagonism.”

Every single Pixar film since 1995, except The Incredibles, has had a Pizza Planet delivery truck hidden in it. 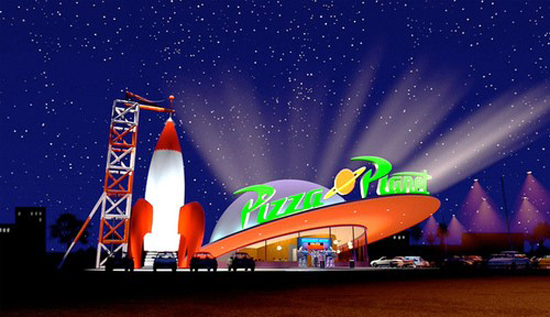 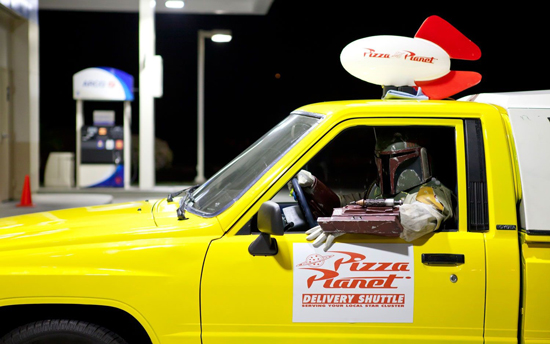 This again suggests a long-standing “inside joke” about paedophilia from the highest levels of Hollywood.

Pixar, of course, makes cartoon-like children’s films with the top-of-the-line computer graphics in the industry.
This was once considered just an interesting “Easter egg” but after WikiLeaks and Pizzagate, we have to rethink everything.