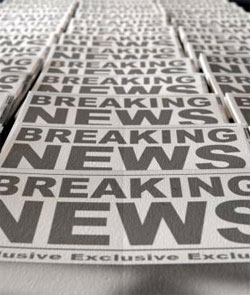 The US corporate mainstream media, facing a barrage of criticism over Hillary Clinton’s defeat in the US election, wants to use the “fake news” argument to stamp out genuine independent freedom of expression in the United States, former CIA officer Phil Giraldi told Sputnik.
The mainstream media, which seeks to have a monopoly on providing fake news that favors its point of view, would like to eliminate alternative and independent sites, Giraldi said.

The US political and media establishments are now claiming to identify a multitude of allegedly “fake news” sites which they blame for the election defeat as well as loss of credibility among the public.

Outgoing President Barack Obama discussed the issue while he was in Germany and Peru. He said that the fake news items harmed democracy and clearly signaled his desire to limit news reports. However, Giraldi, a former CIA case officer and US Army intelligence officer, dismissed these arguments as fake themselves. “The claim that fake news influenced the election is largely invented as there were fabricated news items going in both directions, but it will be used as a wedge issue to convince omnibus sites like Google and Facebook to expand censorship of their offerings” he explained.

Democratic National Committee (DNC) strategist Jessica Tarlov sought on Fox News the closing of the alternative news media outlet Info Wars while Google and Facebook are already warning readers not to click on such sites. “They are already censoring material quite heavily, focusing largely on right wing material that they consider to be offensive” Giraldi observed.

The process would undoubtedly soon encompass a lot of material that might be considered politically incorrect as the people who own and run the mainstream media are generally politically very liberal and left-oriented with little tolerance for opposing views, he warned. Massively biased and hostile coverage of US president-elect Donald Trump by the corporate mainstream media backfired, swinging support to him from millions of heartland Americans, Giraldi recalled.

“The intensely negative coverage of Trump convinced a public that already did not trust the corporate media that he was being persecuted by them, suggesting that he was indeed the ‘people’s candidate, not the candidate of the elites. It had the reverse impact of what was intended” Giraldi maintained.

A survey by research firm TNS UK, commissioned by Sputnik, showed that 80 percent of Americans considered domestic media coverage of the 2016 campaign was biased.

The dominant media within the United States was completely controlled by a tiny cabal of special interests tightly integrated into the national security establishment – or Deep State – that really ran the United States, Giraldi warned. “Nothing can be done to fix the mainstream media as its interests are completely tied in with those of the establishment and in many cases it is owned by the one percent interests that run the country’s Deep State” he stated.

Philip Giraldi is executive director of the Council for the National Interest, a group that advocates more even-handed US government policies in the Middle East.