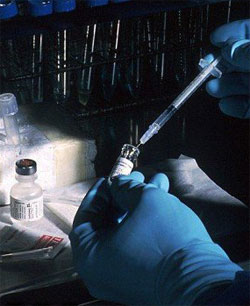 Now, here’s a warning to you all. There’s been disturbing reports describing the ill-effects of a new flu vaccine. In the USA, on a scale never seen before, the illnesses caused, including 1.000’s of paralyzed children or even deaths by the new flu vaccine, has not been explained.

To make matters worse, it coincides with a recent Obama signed Presidential Executive Order promoting a policy ‟Advancing Global Health Security Agenda to Achieve a World Safe and secure from Infectious Diseases”. The global medical establishment people are more demanding than ever in their guidelines to get the population vaccinated as part the advancement of the agenda related to this quietly signed Executive Order.

Developed for the 2016/2017 flu season, the flu vaccine comes with a number of new features as documented by the CDC. There is a recommendations list, recommending people suffering from allergies such as an egg allergy to get vaccinated. This recommendation hasn’t been made before because the vaccine’s adjuvants (ingredients) contain egg traces. However, this perfect rationale for not getting vaccinated because of a potential life-threatening egg allergy has now been tossed out through the window.

Further, in the list, there is only an injected form of this vaccine (no nasal spray) and higher doses for the elderly with a different adjuvant, making it something to be suspicious about. Is this FLUAD (influenza vaccine adjuvanted) vaccine a stealth attack on the elderly? Remember, the ruling elite has a planned population reduction and there have been countless cases where vaccine damage has been covered up, allowing those willing to get vaccinated to be led like lambs to the slaughter…

Don’t fall for the mainstream media propaganda machine not informing you about the toxic ingredients and their potential for harm.
Flu shots have been linked to increasing the likelihood of Alzheimer’s disease, different cancers, narcolepsy, Guillain Barre Syndrome where the body’s immune defense attacks its peripheral nervous system and neurological disorders… They contain a number of highly dubious adjuvants including flu strains, formaldehyde and squalene MF 59 linked to Gulf War syndrome.

Seqirus, owning these new flu vaccines is controlled by CSL Ltd, the parent company, who just happens to have a director named Dr Tadataka ‘Tachi’ Yamada, a former president to the Bill and Melinda Gates Foundation health division, the Clinton Health Access Initiative and has held directorship positions with a number of other Big Pharma companies. An interesting case of following the money trails perhaps, subject for another article.

With all this going on, catching the flu could be the least of your problems! 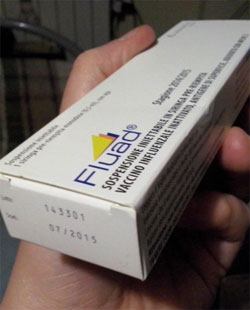 Pharmaceutical giant Novartis has just rolled out a new flu vaccine, FLUAD, intended for Americans age 65 and over. The vaccine, developed for the 2016-2017 flu season, contains a nasty surprise – squalene, the substance many say is responsible for triggering Gulf war syndrome.

Gulf war syndrome, which affects returning military veterans of the Persian Gulf War, is a cascade of conditions and symptoms including fatigue, muscle pain, cognitive problems, rashes, night sweats and other ills. Research scientist Dr. Vera Scheibner maintains that lupus, multiple sclerosis, amyotrophic lateral sclerosis and other life-threatening diseases can also result.
Over 250,000 of the 697,000 US veterans who served in the Persian Gulf are afflicted with the condition.

Squalene was used as an adjuvant in compulsory anthrax vaccinations given to servicemen during the Gulf War. Adjuvants are substances added to vaccines to create a stronger immune response to the vaccine. The anthrax vaccines used an oil-in-water emulsion of squalene known as MF59.

How does squalene harm the human body?

Squalene is a naturally occurring substance in animals, plants and humans. Found in abundant supply throughout the nervous system and brain, squalene is actually a beneficial antioxidant when consumed.

But injecting squalene as an adjuvant is a different story. Adjuvants enhance the immune response and cause the immune system to overreact to the introduction of the organism being vaccinated against. Experts report that the immune system is triggered to attack squalene throughout the entire body – even where it is vital to the nervous system. In truth, studies confirm that adjuvants like squalene can generate long-term, concentrated and unremitting immune responses.

In a study published in the American Journal of Pathology in 2000, a single injection of squalene caused rheumatoid arthritis – an autoimmune disease – in rats. Is it surprising in any way that an overwhelming amount of Gulf war syndrome patients suffer from autoimmune diseases?

Incidentally, adjuvants are used to make it possible to use smaller amounts of a flu vaccine, thus allowing for a greater amount of individual doses – and greater profits for the pharmaceutical companies. 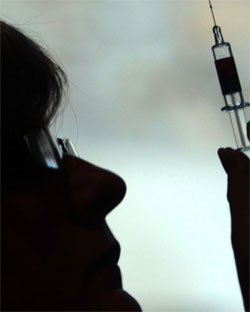 FLUAD, which combines two variants of Influenza A and one of Influenza B, also contains polysorbate 80, the antibiotic neomycin, barium – a heavy metal – and the toxin formaldehyde.

The CDC owns up to “some adverse events” from the FLUAD vaccine, listing them as mild to moderate pain, redness at the injection site, headache, muscle aches and malaise.

Also listed on the agency’s website, however, are adverse effects of a more serious nature. Blood and lymphatic system disorders, cellulitis-type reactions, convulsions, allergic reactions including anaphylactic shock (a life-threatening condition), and nervous system disorders such as Guillain-Barre syndrome have all occurred as a result of the vaccine.

Noting that 80 to 90 percent of seasonal flu-related deaths and 50 to 70 percent of hospitalizations occur in people 65 and older, the CDC lists FLUAD as an “acceptable alternative to other vaccines for this age group.”

It’s clear that many elderly people – with weakened immune systems in the first place – will be subjected to the potential ravages of squalene-laden injections this flu season. For the CDC, it’s business as usual. But as more and more people wake up to these ‘healthcare’ practices, we can put a stop to this dangerous medical procedure – especially when safer remedies already exist for the flu!