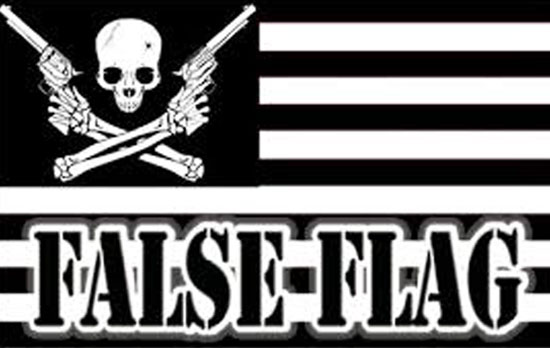 This article will give you the tools you need to identify possible false flag events, including 12 identifiers of a false flag operation. We have posted these characteristics below. As you review the articles and videos from mass shootings, see if you can see a pattern or evidence of false flag activities.

Let’s compare what Wikipedia tells us are the “12 basic strategies of perception management” with what might be its counterpart in “characteristics of a false flag event”.

1. Ambiguity: If ambiguity increases, the perceiver finds it harder to form an accurate perception.

2. Social status: Targeting a person’s position in society or in an organization.

Counterpart: The official narrative has obvious domestic and geopolitical advantages for the governing body.

3. Impression management: The perceptions or impressions of others.

Counterpart: The narrative behind the attack serves to leverage emotions like fear, as well as patriotism, in order to manufacture consent around a previously controversial issue.

4. Preparation: Having clear goals and knowing the ideal position you want people to hold.

5. Credibility: All information uses prejudices or expectations to increase credibility.

Counterpart: News agencies keep saying that they are “being given reports” or “being told” and do not cite who reported or told them the unconfirmed information they broadcast as real.

6. Multi-channel support: Have multiple arguments and fabricated facts to reinforce your information.

Counterpart: No obvious motive for the mass attack and no prior indicators. Shooter leaves manifesto or lots of evidence “proving” they were “radicalized” or “on drugs”, or were “undesirables”.

8. Security: The nature of the deception campaign is known by few.

Counterpart: All drill participants and crisis actors sign Non-disclosure Agreements with “National Security clause” promising swift and severe punishment if broken. Everyone involved is on a “need to know” basis and kept in the dark about the overall intent of the event.

9. Flexibility: The deception campaign adapts and changes over time as needs change.

Counterpart: Evidence gets destroyed or tampered with and the details don’t matter because the culprits are dead. No more interest in an investigation.

10. Coordination: Organize in a hierarchy to maintain consistent distribution of information.

Counterpart: The federal agencies trump the local law enforcement agencies due to the “National Security” element of the drill which is ultimately controlled by the Department of Defense.

Counterpart: Culprit is dead and evidence disappears from news reports, Internet, and media. Patsy has no military training, yet shoots extremely fast and accurately but no authority looks at the evidence.

Counterpart: Families of “victims” have acting backgrounds and receive payoffs in GoFundMe accounts and direct payoffs, especially mortgages. They often show little to no emotion, and even smile or laugh. The lie perpetuates and the official story is shaped by the media into truth.

New research exposes the risks of geoengineering to artificially intervene in global warming: It may devastate the planet