Flu vaccines are an IQ test… a deadly one (I)

Call it the Age of Transparency, if you wish, but the dark secrets behind almost every once-trusted institution are now being exposed for all to see. Public trust is already shattered in the treasonous FBI, the corrupt CDC, the “fake news” mainstream media and the farce of conventional medicine. On the heels of all that, we now learn that a published science paper has identified and named the genocidal infertility chemical that was secretly added to World Health Organization-approved vaccines administered solely to black women in Africa. 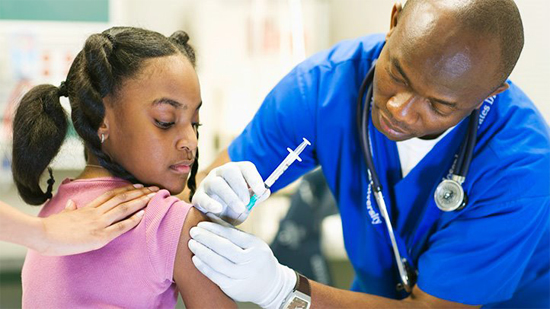 That paper, published in the open access journal Scientific Research, is entitled HCG Found in WHO Tetanus Vaccine in Kenya Raises Concern in the Developing World. (You can read it here) Authored by John W. Oller, Christopher A. Shaw, Lucija Tomljenovic, Stephen K. Karanja, Wahome Ngare, Felicia M. Clement and Jamie Ryan Pillette, the study not only confirms that a depopulation chemical was deliberately spiked into vaccines administered to African women in Kenya, it also names the infertility chemical that was used. (Below we explain how the chemical “weaponizes” the wombs of black women, turning the bodies of mothers into biological assault weapons against their own unborn children…)

Here’s the full abstract from the study, word for word:
“In 1993, WHO announced a ‘birth-control vaccine’ for ‘family planning’. Published research shows that by 1976 WHO researchers had conjugated tetanus toxoid (TT) with human chorionic gonadotropin (hCG) producing a ‘birth-control’ vaccine. Conjugating TT with hCG causes pregnancy hormones to be attacked by the immune system. Expected results are abortions in females already pregnant and/or infertility in recipients not yet impregnated. Repeated inoculations prolong infertility. Currently WHO researchers are working on more potent anti-fertility vaccines using recombinant DNA. WHO publications show a long-range purpose to reduce population growth in unstable ‘less developed countries’. By November 1993, Catholic publications appeared saying an abortifacient vaccine was being used as a tetanus prophylactic. In November 2014, the Catholic Church asserted that such a program was underway in Kenya. Three independent Nairobi accredited biochemistry laboratories tested samples from vials of the WHO tetanus vaccine being used in March 2014 and found hCG where none should be present. In October 2014, 6 additional vials were obtained by Catholic doctors and were tested in 6 accredited laboratories. Again, hCG was found in half the samples. Subsequently, Nairobi’s AgriQ Quest laboratory, in two sets of analyses, again found hCG in the same vaccine vials that tested positive earlier but found no hCG in 52 samples alleged by the WHO to be vials of the vaccine used in the Kenya campaign 40 with the same identifying batch numbers as the vials that tested positive for hCG. Given that hCG was found in at least half the WHO vaccine samples known by the doctors involved in administering the vaccines to have been used in Kenya, our opinion is that the Kenya ‘anti-tetanus’ campaign was reasonably called into question by the Kenya Catholic Doctors Association as a front for population growth reduction.”

Vaccines are “a front for population growth reduction”

Let there be no mistaking the conclusion reached by the authors of this published science paper. They have unveiled all the following shocking truths that the mainstream media absolutely refuses to publish:
1) Tetanus vaccines are used as a “medical front” for depopulation vaccines.
2) The program is administered in conjunction with “public health” initiatives engineered by the World Health Organization.
3) The goal of this program is the depopulation of blacks in Africa.
4) The HCG infertility chemical used in this genocidal “vaccine violence” against black women causes a woman’s body to turn against its own unborn child, attacking it as a foreign invader, causing a spontaneous abortion.

These shocking but true revelations confirm what the alternative media has been accurately reporting for years, namely that vaccines have been weaponized against humanity and are deliberately laced with depopulation chemicals before being injected into the young women of ethnic groups which are targeted for extermination. It sounds like a James Bond villain’s secret plot for world domination, but it’s actually real. And it’s happening right now, all across the planet, under the “authority” of the so-called World Health Organization.

Must See: The Science Agenda To Exterminate Blacks

Watch the jaw-dropping one-hour science and medicine presentation below, which provides exhaustive evidence of this covert extermination program carried out in the name of vaccines. The lecture is called The Science Agenda to Exterminate Blacks.

Statement from the Kenya Conference of Catholic Bishops

The discovery of this genocidal, depopulation chemical in routine vaccines raised the alarm among Kenya’s Catholic Bishops, who are themselves pro-vaccine advocates. In an astonishing statement of truth posted at the Catholic Bishops website, they state the following:

“Dear Kenyans, due to the direction the debate on the ongoing Tetanus Vaccine campaign in Kenya is taking, we, the Catholic Bishops, in fulfilling our prophetic role, wish to restate our position as follows:

The Catholic Church is NOT opposed to regular vaccines administered in Kenya, both in our own Church health facilities and in public health institutions.
However, during the second phase of the Tetanus vaccination campaign in March 2014 that is sponsored by WHO/UNICEF the Catholic Church questioned the secrecy of the exercise. We raised questions on whether the tetanus vaccine was linked to a population control program that has been reported in some countries, where a similar vaccine was laced with Beta- HCG hormone which causes infertility and multiple miscarriages in women.

Based on the above grounds, we, the Catholic Bishops in Kenya, wish to State the following:
– That we are shocked at the level of dishonesty and casual manner in which such a serious issue is being handled by the Government.
– That a report presented to the Parliamentary Committee on Health November 4, 2014 by the Ministry of Health, claiming that the Government had tested the vaccine and found it clean of Beta- HCG hormone is false and a deliberate attempt to distort the truth and mislead 42 million Kenyans.
– That we are dismayed by attempts to intimidate and blackmail medical professionals who have corroborated information about the vaccine, with threats of disciplinary action. We commend and support all professionals who have stood by the truth.
– That we shall not waver in calling upon all Kenyans to avoid the tetanus vaccination campaign laced with Beta-HCG, because we are convinced that it is indeed a disguised population control program.”

Note carefully that this letter references “attempts to intimidate and blackmail medical professionals”. Sounds familiar? That’s the vaccine deep state hard at work, doing in Africa exactly what it does in the United States and everywhere else: threatening, intimidating, blackmailing, slandering or defaming anyone who dares go public with the truth about toxic vaccines.

Yes, there is a covert, genocidal depopulation program being waged by the World Health Organization, and it uses vaccines as its front

As both the science paper (mentioned above) and the Kenya Conference of Catholic Bishops have reluctantly concluded, there is indeed a covert human depopulation program under way right now, and that program uses “vaccines” as a front for the attempted extermination of targeted groups via medically-induced spontaneous abortions and chemically-induced infertility. As with many medical experiments, the program is first being deployed and tested in Africa. (This has also been done by Pfizer, whose executives were named in arrest warrants for the death of a Nigerian child from vaccine medical experiments.) Once the chemical assault is perfected in Africa, it is then deployed elsewhere. (Note that Ebola was first allowed to spread in Africa, then was deliberately brought to the United States where it was carelessly allowed to spread in a Texas hospital… it’s the same pattern for many weaponized infectious agents.)

Most importantly, this genocidal depopulation program turns a woman’s body against her own unborn child, effectively weaponizing the womb against humanity. Effectively, the vaccine transforms mothers into murderers of their own unborn babies. This is, of course, called “public health” medicine, perhaps in the same way that mass abortions are called “women’s health” by the abortion industry.

To state that this program is a violation of medical ethics and informed consent doesn’t even begin to describe the depth of the crimes against humanity being carried out today through vaccines and WHO public health initiatives. It proves, beyond any doubt, the existence of a shadowing, vaccine-pushing organization dubbed the “vaccine deep state” which seeks to deploy vaccines as covert chemical weapons against humanity.

This isn’t a conspiracy theory. It’s not the fantasy of some James Bond villain, either. It’s happening right now, right under our noses, and nearly every single vaccine-pushing scientist, doctor and journalist is knowingly or unknowingly taking part in a chemical assault on humanity in the name of “immunizations”.