You might not hear much about the pineal gland, but that doesn’t mean this part of your body is unimportant.
In fact, it is so essential to your overall well-being that it is sometimes referred to as the “seat of the soul”. This pea-sized gland is found between the two hemispheres of your brain, but it’s not protected by the blood-brain barrier, which makes it very vulnerable to toxins. 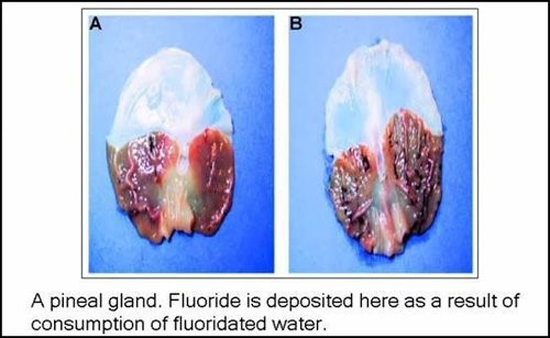 This hormone-producing organ is responsible for the production of melatonin, which regulates your body’s sleep and wake schedule, or circadian rhythm.
When you think about how crucial getting proper sleep is for optimal health, it’s clear that you should be doing everything within your power to take care of your pineal gland.
Unfortunately, many people suffer from a calcified pineal gland. Of course, this gland isn’t supposed to calcify, but years of exposure to pesticides, additives in food, radiation, and other toxins can cause it to happen without you even realizing it.

One of the biggest culprits, however, is fluoride.
Fluoride consumption can inhibit the gland’s ability to produce melatonin, not only disrupting the sleep cycle but also interfering with puberty in females.
Studies have shown that fluoride deposits in the gland as people age and leads to calcification, with cadaver studies showing a positive correlation between pineal calcification and pineal fluoride.

Why don’t you want your pineal gland to calcify?
Just what can happen if your pineal gland calcifies? According to medical literature, it has been associated with diseases such as Alzheimer’s, insomnia, Parkinson’s, Bipolar disorder, Schizophrenia, sleep disorders, hormone imbalances, circadian dysregulation and stroke.

That’s why it is so important to take steps to reduce your exposure to fluoride. Unfortunately, it’s found in so many sources in our everyday lives, from tap water and infant formula to toothpaste, Teflon, and foods and drinks made using municipal water.
If your area has fluoride in the tap water, boiling it won’t help matters. Instead, you’ll need to invest in a water filter that uses reverse osmosis. Watch out for tee and soup made at restaurants as it was likely made using fluoridated water.

Even if you don’t have fluoride in your water, you’re still vulnerable. It’s also found in many drugs.
Prozac, for example, whose chemical name is fluoxetine, is about 30 percent fluoride, and some believe it brings about its effects by essentially poisoning the pineal gland. In fact, animal studies have shown that mice who have had their pineal glands removed stop responding to Prozac.

Look for toothpaste that doesn’t contain fluoride as an ingredient; consider making your own with ingredients like organic coconut oil.
Ask your dentist not to give you fluoride gel treatments as the manner of delivery makes it extremely difficult to avoid swallowing it. This is especially important for children.
Read all food labels carefully and stick to fresh food whenever possible. Processed foods can contain very high amounts of fluoride.

If you’re worried about your fluoride exposure, you might try to detoxify your pineal gland.
Some of the foods and supplements that can help with this type of detoxification include garlic, raw apple cider vinegar, oregano oil, and raw chocolate. Spending some time in the sun is also believed to help the pineal gland.

This is just the latest in a long list of reasons to avoid fluoride, joining problems like a greater risk of hypothyroidism, lower IQ, bone and bladder cancers, cell death, and changes to gene expression.