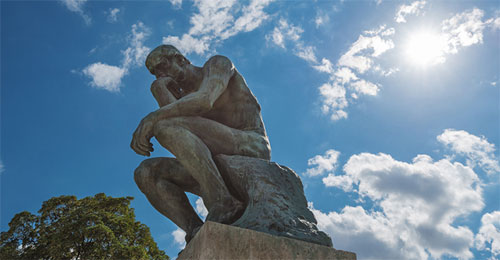 It takes a lot of effort, dedication, and open-mindedness to lead a good life of excellent health, wealth, love and happiness.

We have to make the best out of our journey. One of the greatest ways to learn how to live is by learning from those who have lead the good life themselves. Following are four of the greatest thinkers’ secrets to live a good life.

1. Jordan Peterson: Treat yourself like someone you’re responsible for helping

Ever heard of the term “Treat yourself like you treat your best friend?” As corny as it sounds, this tip holds water.

You need to be kind to yourself, and you must be compassionate. In fact, studies suggest that self-compassion is more critical to your wellbeing than self-esteem.
If this is true, why is it hard for many people to make friends with themselves? The answer, according to Jordan Peterson, lies in the fact that you’ve been around your imperfect self for so long that all you can see is a flawed human being.

A person, still according to Peterson, will deride his whole existence just because, in his eyes, he’s the ugly, ashamed, frightened, worthless, inadequate, insignificant, resentful, defensive descendant of Adam. Peterson suggests you will gain inner peace when you see yourself through the eyes of a loving coach trying to lead their imperfect mentee to the best possible results.

Michael J. Gelb, the author of How to Think Like Leonardo da Vinci: Seven Steps to Genius Every Day, believes dimostrazione – the Italian translation of demonstration – is one of Da Vinci’s seven principles to his unmatched intelligence. The Italian sculptor, inventor, musician, geologist, and mathematician had a special knack for examining how things work, including his mind, and he made sure to document his musings on paper so he could understand himself better. Before he died, Da Vinci left one of his trustees a 10,000-paper journal full of notes, questions, designs and even jokes and fables.

To reap the benefits of dimonstrazione, you need to regularly detach yourself from the digital world for a few minutes of ruminating and journaling. Question your thoughts, beliefs, and why you/people do things in specific ways. Doing this will spark your creativity and help you solve deeply-rooted problems much easier.

Some may think making lots of mistakes is the best way to learn how to do something. According to Richard Dawkins, making so many mistakes is a waste of time and can sometimes be fatal. In his opinion, most of what you learn should come from “simulation”. He believes one should study the best and worst types of people, emulate their good and avoid their bad.

Most of the time, all you need is to follow someone else’s wheel instead of trying to invent your own – at least until you’re strong enough to lead your way. Additional tip: Get coaching or a mentor who’s at least 20 years older than you. A good one will save you lots of time, effort and money.

4. Carl Sagan: The universe is not required to be in harmony with ambition

Be flexible and formless, then adapt to the universe instead of trying to bend it to your will – which may not happen. To Carl Sagan, a man should understand that life won’t always give him what he wants, but he must use what life gives him for his better good. If life throws you a tomato, make a soup of it. Many successful people spent decent parts of their lives drifting between careers only to realize later that they wouldn’t have made it without those career wanderings.

You must also understand that the purpose of a goal isn’t to hit the target but to evolve into the type of person who can achieve his goals. You won’t always win if you swing for the fences with every shot, but your track record will be far better than someone who plays it safe not because of your extraordinary genes but because the type of goal you chose for yourself forced you to step out of your shell and grow.

“Imagination will often carry us to worlds that never were. But without it we go nowhere.” – Carl Sagan

Take great care of your mind. Read good books, understand your cognitive biases and take courses in lateral thinking and problem solving. Your mind is one of your most important assets and it’s a great shame if you fail to use it well.