The Unification of Italy Desired by English Masons 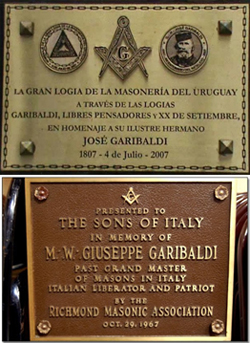 Contrary to what they wanted to make us believe for centuries, the unification of Italy was not the consequence of a movement of Italian identity, which has never taken place, because of the linguistic and ethnic differences of the various regions. The unification of Italy was a concocted strategy between Mazzini (a member of the Masonic Scottish Rite), and Henry John Temple (Third Viscount Palmerston, former British Prime Minister and member of the Grand Lodge of England).

According to historians, the government of the Mason Henry Temple financed the Expedition of the Thousand, which Freemason Giuseppe Garibaldi started in 1860. Garibaldi said at a public meeting in London that despite receiving three million French francs for the mission, without the help of the British government, the members of the expedition could never pass the Strait of Messina.

The landing of the Thousand in Naples was protected by the Kingdom of Sardinia and by ships from a British fleet in the Gulf ready to intervene. The newspapers – especially the archives in London, Vienna, Rome, Turin and Milan and, of course, Napoli – provided documentation needed to reconstruct the true scene of an international conspiracy that swept the Kingdom of the Two Sicilies. This certainly did not take place at the hands of a thousand warriors motivated by a unitary ideal, but due to a well-planned act of imperialist expansionism imposed by the British who, as Masons and Protestants, saw as major obstacles to their policies the Bourbons Catholics and the Papal States: the breach of Porta Pia occurred precisely on September 20, which is the Masonic new year.

It should not be forgotten that the same Henry Temple was the promoter of the Opium War in China. Whoever happened to own Sicily was in the center of the crossroads of the drug trade between Europe and the United States of America: the great international mafia. It was then that Garibaldi was coopted by the Grand Orient of Ancient Accepted Scottish Rite, by a rival in the Grand Lodge of England and France, who awarded him, in Turin, in one swoop, all grades from 4 to 33 (the highest) of the Supreme Council of Palermo.

The War of American Secession Organized by Masons 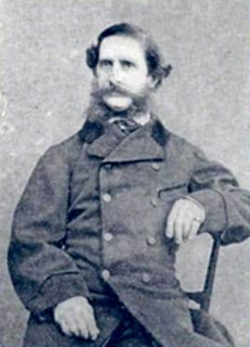 The head of American Freemasonry, Albert Pike, in 1860 – the same year in which Mazzini fomented revolution against the Bourbons in Sicily – overseas the Civil War unleashed, which became one of the most heinous war for Southerners. Inspired from the ideas of Young Italy and Young Europe in 1830, 15 years later, in 1845, diplomat Edwin de Leon launched the Young America movement. It advocated free trade, social reform, expansion southward into the territories, and support for republican, anti-aristocratic movements abroad. It became a faction in the Democratic Party in the 1850s. In economic policy Young America saw the necessity of a modern infrastructure of railroads, canals, telegraphs, turnpikes, and harbors; they endorsed the “Market Revolution” and promoted capitalism.

At the invitation of a committee of the Southern congressmen, de Leon founded, in Washington, the Southern Press, which had a large spread in the early eighteen-fifties.

For his services during the campaign, Freemason Franklin Pierce, the new US president, appointed de Leon consul general in Egypt, a position he occupied for two terms with considerable success. It was during his incumbency that he heard about the secession of his native state from the Union. He made his resignation and returned to New Orleans. From there he went up to Richmond to enlist as a soldier in the army led by Confederate Jefferson Davis.

But Davis sent him instead in a confidential mission to Europe to ensure the recognition of the Southern Confederacy by foreign powers. De Leon arrived in England in July 1862. As a diplomatic agent, he was received in the highest circles, both in England and in France, and personally pleaded the cause of Confederation with Henry Temple and the Emperor Napoleon III.

The Assassination of Abraham Lincoln, the Work of a Freemason 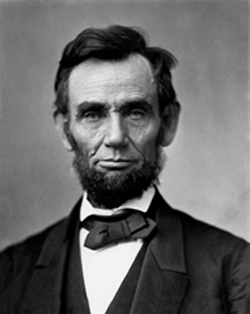 Abraham Lincoln, the sixteenth president of the United States of America, assassinated a few days after the Union victory over South Confederation

Many agree that the assassination of Abraham Lincoln was decided in those areas of high finance that have always been included in Freemasonry, because Lincoln created the greenback, that took away the bankers’ “enlightened” control of money.

“These US banknotes legal tender, or greenbacks, were receipts for labor and goods produced in the United States. The greenbacks were used to pay soldiers and suppliers, and were exchanged for equivalent goods and services provided to the community”, says Ellen Brown, American lawyer expert in finance. “Greenbacks helped the Union not only to win the war, but also to put the basis for a period of unprecedented economic expansion.”

Lincoln was assassinated a few days after the victory of the Northerners, in a crime that represented the revenge of the bankers as well as Southerners.

“The assassination of Abraham Lincoln was perpetrated by the extremist Jew John Wilkes Booth (Botha), a Freemason of the 33rd degree, April 14, 1865 in Washington DC, only five days after the end of the American Civil War” – Estonian scholar Juri Lina recalls in his book Freemasonry.

Izola Forrester, Booth’s grandson, in his book This One Mad Act (1937), wrote that Booth belonged to the Lodge of the Knights of the Golden Circle, as well as the revolutionary movement Young America. Izola Forrester revealed, in detail, that “the Freemasons were involved in the assassination of the President… The subsequent assassination of Wilkes Booth was organized by Judah P. Benjamin, a high degree Freemason. He was the Chief of Intelligence of the Southern Confederacy. After the murder, he fled to England.”

The Attack in Sarajevo and the ‘Secret Black Hand’ Company 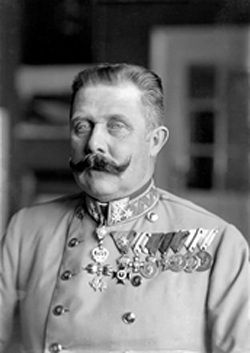 Archduke Franz Ferdinand of Austria was assassinated in Sarajevo

The attack in Sarajevo was a murderous act committed by the young Bosnian Serb Gavrilo Princip against Archduke Franz Ferdinand Carl Ludwig Joseph of Austria-Este, heir to the throne of Austria-Hungary, and his wife Sofia, during an official visit in the Bosnian town on 28 of June 1914, and it caused the beginning of the First World War.

“Since the end of the war of the nineties, Princip felt Sarajevo had lost its ‘heroic aura’, and he became a Serbian nationalist who was acting on behalf of Belgrade and the military secret society” reads the East Journal.

“Nevertheless, according to the deposition process to members of the organization Mlada Bosna (Young Bosnia), both Princip and 23 other defendants (out of 25 in all) declared themselves Yugoslavs, claiming the unification of all the subjugated peoples’ empire.

In fact, the political motivation, as well as the symbols and the oath of the organization, were a direct emulation of the Italian Risorgimento (Italian Unification, also known as Resurgence), and more generally European one. The Young Italy of Giuseppe Mazzini was able to exercise enormous influence on the minds of members of Young Bosnia, and their principles were modeled after those of union and independence that led to the unification of Italy in 1861.

How not to suspect that Young Bosnia and the Black Hand secret society have arisen with the hidden direction of the same expert conspirator, Mazzini?”

Italy in World War I at the Will of Masons

As it is clear from numerous writings of Mazzini, he was strongly hostile to the Habsburg Empire as an expression of an autonomous monarchy, and especially Catholic one. When the Austro-Hungarian Empire was at war with Bosnia, Italy would have to support it, or at worst, be neutral.

Initially, together with Prime Minister Antonio Salandra, he had evaluated the possibility of entering into war on the side of Austria and Germany, or remaining neutral, but later the prevailing political line was already carried out by another Mason, Sicilian Antonino Paternò Castello, Marquis of San Giuliano, who was the first to open an understanding with Britain and France, the two countries of birth and proliferation of the Grand Lodge of England and of the Supreme Council of Scottish Rite.

The Austrian proposals were not considered appropriate, but only nine days from the response of the Austrian Foreign Ministry, on April 25, Italy entered into the agreement with England and France, which the next day was ratified in London with the signing also by Russia and the declaration of war. 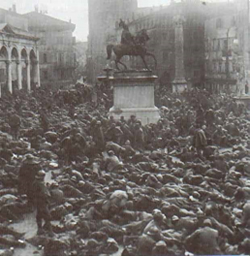 Italians taken prisoners by the Germans after the conquest of Udine on October 28, 1917, after the rout of Caporetto

Researchers are stunned at the tremendous anticancer potential of turmeric