G-20 in Hamburg. Feint Puppet ‘Rulers of the World’ Playing Kings. Well organized riots to serve the purpose of the rulers

The 2017 G20 Hamburg summit was the twelfth meeting of the Group of Twenty (G20), which was held on 7–8 July 2017, at Hamburg Messe, in the city of Hamburg, Germany. Apart from the recurring themes relating to global economic growth, international trade and financial market regulation, the G20 Hamburg summit was expected to focus on the following “issues of global significance”: migration, digitization, occupation, health, women’s economic empowerment and development aid, as well as terrorism, free trade and the United States’ withdrawal from the Paris Agreement. The 30-page summary paper stayed vague in many sections.
Many additional documents were agreed upon, barely noticed by the public.

In the weeks prior to the summit, sporadic car fires in remote places, such as the neighborhood of Blankenese, occurred regularly in the city. On the night of June 18, 2017, unidentified individuals in Berlin, Hamburg, Cologne, Dortmund, Leipzig, and Bad Bevensen caused a total of 13 arson attacks on tracks of the German railways. A security expert was quoted by the German press agency DPA as saying that a connection to left-wing extremism related to the upcoming G20 Summit was “conceivable”. According to a German interior ministry spokesman, cable fires had been caused by “unconventional explosive and incendiary devices”. 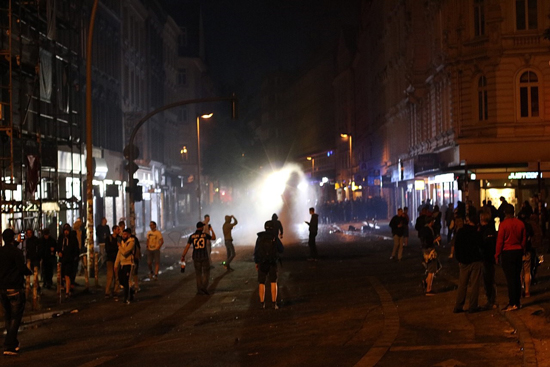 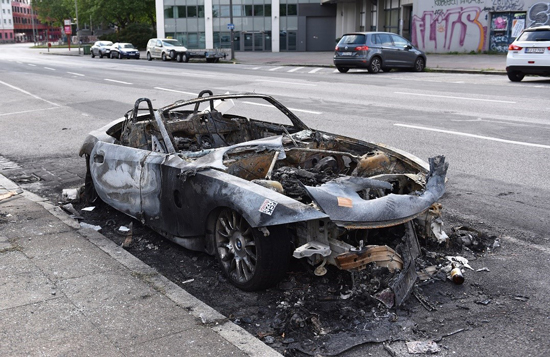 A burnt BMW car after the first night of riots 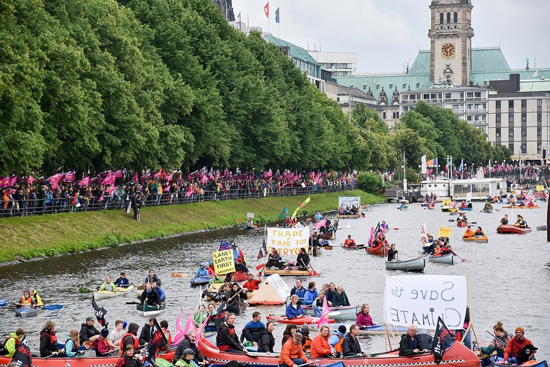 Peaceful demonstration in boats, Binnenalster in Hamburg near town hall 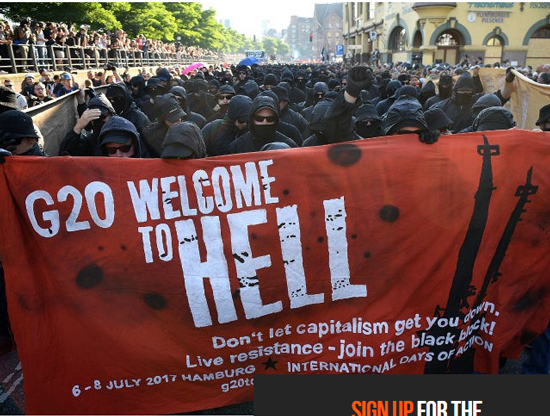 Most of the demonstrators seem to ask for exactly what the masons want: new “order” out of chaos of the old order, which is the motto and strong desire of the dark elite ruling the world from the shadows. So they first want to create the chaos! 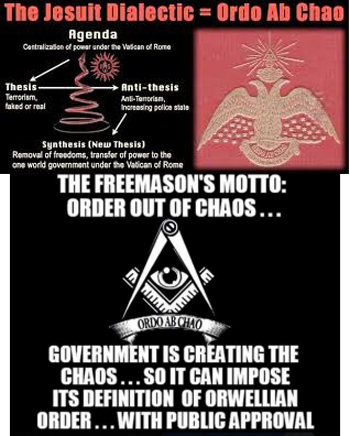 This is incredible news – but apparently true: alternative media reports that rioters were being paid by German Social Democrats, and that they (Antifa) are strongly represented in German state governments.

But also George Soros funded American “Refuse Fascism” organization was involved in the riots. The Daily Caller, July 7, 2017: “Refuse Fascism claims to have a ‘German contingent’ at the massive G20 protests in Hamburg, Germany this week. Soros has sworn to subject Germany to shock therapy for refusing to make the EU a fiscal union with Germany as paymaster for the weak South European economies.” 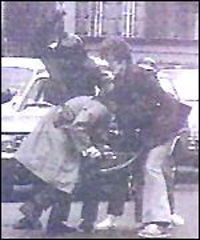 According to a BBC article, in the picture on the right is former German Foreign Minister, Joschka Fischer (with helmet) beating a policeman on the street in 1973. He later became a “distinguished CFR diplomat in Germany” and a co-founder of Rothschild’s European Council on Foreign Relations alongside with the capitalist and philanthropist George Soros. So there is a certain suspicion about the connection between the rioters and the NWO politicians.

Probably even agents provocateurs were involved – often even policemen!

Friday July 7, 2017: “The reasons why the (Hamburg) Senate and the police leadership have staked on the clearly foreseeable escalation will certainly have to be critically examined in the following weeks. One should not forget the extent to which specific agents have played a role in some incidents. The action of provocateurs who were recruited from the neo-fascist scene and who had appeared under the camouflage of the Black Block had already played a not insignificant part in the bloody escalations at the G8 summit in Genoa 2001. In any case, it should come as a surprise if this tried-and-tested falsification of a protest, which certainly is favorable for the rulers, had not been applied in Hamburg, too – where the police run-up strategy clearly was in régie for escalation”.

But the important aspect of the G20 meeting is that the participants reveal themselves as Freemasons – and thus the puppets of the Vatican and its executive arm, the City of London of the Rothschilds.

The pyramid of power in world governance/government: the Black Pope of the Jesuit Order, now in total control of the Vatican – the Vatican Treasure Guardian and executives – the satanist Rothschilds (founder of the Illuminati) of the City of London – the superlodges – the Masonic grand lodges – the local lodges for most of “our” politicians who through their grand masters receive the orders from the higher step of the pyramid.

This applies to Trump and Putin in particular.
The Mainstream Media always describe these two gentlemen as the masters of the world. In particular in these days, they time and again keep telling us that the way Putin perceives Trump will be decisive for the fate of the world. That is nonsense. They only react to orders from executive City of London. Should they act on their own they know their fate: that of Abraham Lincoln and that of John F. Kennedy – already being prepared for Trump.

Take a look at the following photos and note the hand sign. They are Masonic. You can find explanations in Texe Marrs Codex Magica.

Below is a photo series of Trump’s, Merkel’s and Putin’s NWO hand signs. 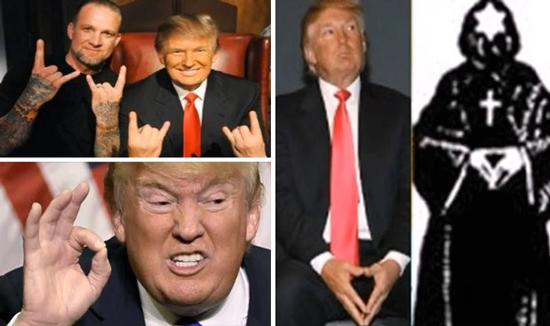 Hail to the chief: The Devil´s horns, Masonic pyramid gesture and “666” with the hand 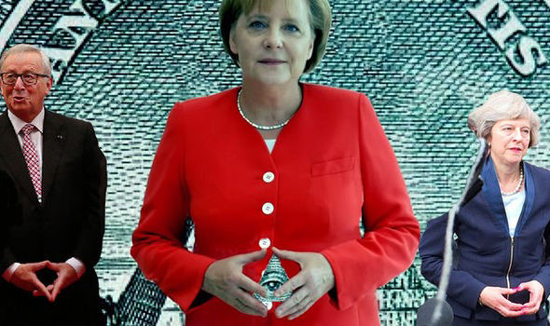 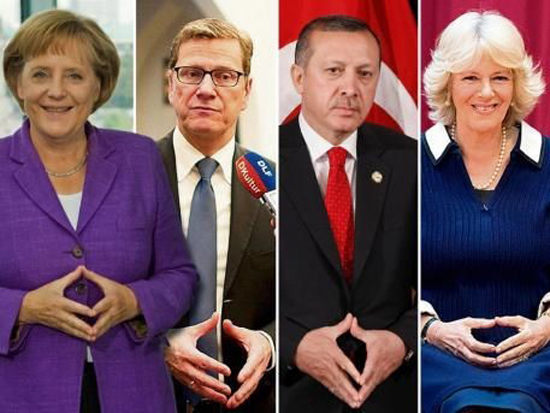 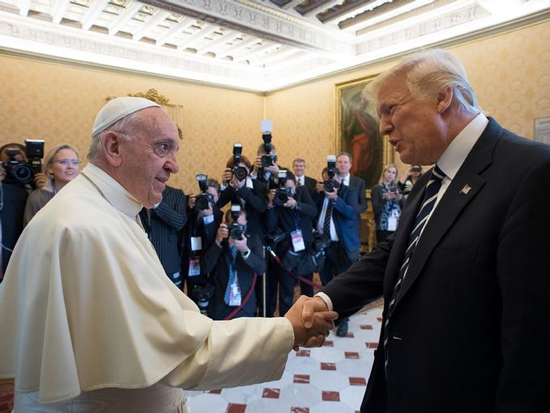 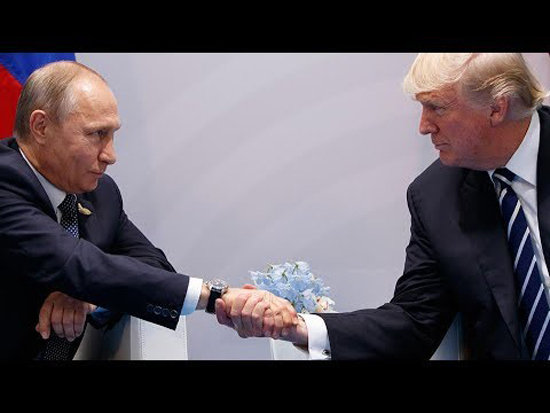