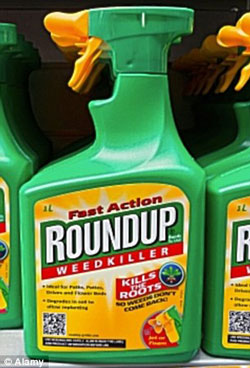 Roundup weed-killer and others that contain glyphosate comprise the most widely used herbicides in the world. However, the World Health Organization has been referring to glyphosate as a “probable human carcinogen” since 2015.

Recent testing has found that this toxic chemical was present in the urine of a staggering 93 percent of persons tested. Children have the highest levels of glyphosate, and higher amounts are generally found in agricultural areas like the Midwest and Western United States.

Do we really want glyphosate in our immediate living space?

Monsanto’s Roundup herbicide is the most well known and used form of the glyphosate chemical. It is used to kill vegetation in gardens, farm fields, parks, playgrounds and roadsides. It is non-selective and broad-spectrum, and it is also getting into our water and food as well as in the systems of animals and humans.

Monsanto has been marketing seeds that they call “Roundup Ready” including corn, soy, cotton, alfalfa, canola and sorghum. These seeds are genetically modified to make the crop resistant to the glyphosate chemical in Roundup. Because of this, many farmers get the message that it is safe to use Roundup weed-killer with abandon.

Glyphosate in Roundup weed-killer linked to many health problems

There is no known “safe” level of glyphosate for humans. Research actually shows that the herbicide disrupts hormones and has been linked with non-Hodgkin’s lymphoma. Products containing glyphosate are much more restricted in Europe due to health concerns. The U.S. government has not yet created protections against this toxic substance for American citizens.

A 2015 study out of India found Roundup to be an endocrine disruptor in rats. Another study published in the Journal of Occupational and Environmental Medicine found increased levels of deadly cutaneous melanoma skin cancer among persons exposed to both sunshine and glyphosate during their agricultural work in Brazil and Italy. 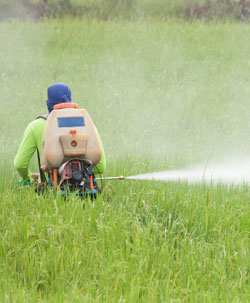 Yolanda Mendoza of the U.S. sued the makers of Roundup, claiming that it led to her five-month battle with non-Hodgkin’s Lymphoma. She was only able to see her kids once per week during this ordeal, and at numerous times thought she was going to die.

Mendoza used Roundup in a backpack sprayer around her one-acre yard once per week. She is now among a group of 30 people suing Monstanto. All of them were afflicted with non-Hodgkin’s Lymphoma and believe it was due to using the Roundup product regularly at work or at home.

The group’s lawyers reference the 2015 International Agency for Research (IARC) World Health Organization report on cancer. The WHO called glyphosate “probably carcinogenic” due to the chemical causing cancer in lab animals. Glyphosate was also found to damage human DNA.

Preventing glyphosate exposure impossible until it is banned

Filtering drinking water and eating certified organic fruits and vegetables can help to reduce exposure. However, even if consumers choose not to use glyphosate on their own properties, they risk exposure from its use in agriculture as well as public areas such as parks, ball fields and roadsides.

Unless Roundup and all other products containing the toxic chemical glyphosate are banned from use worldwide, humans will continue to be at risk.