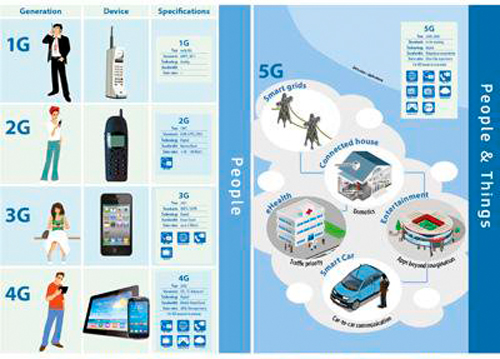 Everyone who is enamored with smart technology probably will not want to think about the issues highlighted in this article, but it’s important to know what the future foreshadows and probably will entail once 5G technologies are rolled out and become the norm.

Recently, Health Impact News published the article New 5G Cell Towers and Smart Meters to Increase Microwave Radiation – Invade Privacy by John P. Thomas, which ought to get consumers thinking very seriously about how their lives and health will be affected when there will be nowhere to run to get away from electrosmog and the surveillance society forced upon everyone by utility companies.

First and foremost, consumers must realize what’s involved with 30 GHz. A Gigahertz (GHz) is a frequency equal to one billion hertz or cycles per second. Now multiply that 30 times; how many cycles per second do you get? Isn’t that 30 billion cycles per second? Now, imagine those GHz frequencies traveling over in-wall copper electric house wires that are built to take only 60 Hz! Such GHz frequencies just may be considered as sinusoidal harmonics or dirty electricity.”

To put the above into proper perspective about microwave technology and non-ionizing radiation waves such frequencies emit, we need to understand the frequency of electricity. One Hertz (Hz) equals one cycle per second. One kilohertz (KHz) is equivalent to one thousand cycles per second. One megahertz (MHz) equals one million cycles per second. One gigahertz (GHz) is equal to one billion hertz or cycles per second – frequencies not found naturally in Nature, except from man-made/generated electromagnetics.
The higher speeds for Wi-Fi and electronics need to be juxtaposed against health ramifications no one is considering regarding 5G and 30 GHz microwaves.

Thomas points out what’s known about health issues from microwaves: “The symptoms of microwave radiation exposure include fatigue, headaches, heart palpitations, high pitched ringing in the ears, dizziness, disturbed sleep at night, sleepiness in daytime, moodiness, irritability, unsociability, feelings of fear, anxiety, nervous tension, mental depression, memory impairment, pain in muscles, pain in the region of the heart, and breathing difficulties, to name a few.
Inflammation (caused by excess histamine in the blood), oxidative stress, autoimmune responses, reduced blood flow to the region of the thalamus, pathologic leakage of the blood-brain barrier, and a deficit in melatonin metabolic availability have all been observed.
There is evidence that existing and new frequencies of microwave radiation are associated with cancer, heart disease, neurological dysfunction, immune system suppression, cataracts of the eyes, and sperm malformation.”

5G has not been studied for short- or long-term effects, since the microwave industry just plugs along content that there are no such wavelengths as non-thermal radiation that cause adverse health effects, so upping the frequencies apparently will be fine with regulatory agencies like the FCC (Federal Communications Commission) and state public utility commissions.

A precedent already has been set for irresponsible implementation of technology with the roll out of AMI Smart Meters that pump out 2.4 GHz 24/7/365 from ZigBee radio transmitters. Isn’t it only logical to give consumers faster Wi-Fi service, but who is counting the costs?

Those costs not only include monthly fees paid for such high speed services, but all in-home appliances will be mandated to be “smart meter compliant,” i.e., capable of being monitored and managed by your electric utility company for whatever reasons they choose, including usage and interruption of service. That means, in effect, if your appliances are not “smart compliant” you will either have to replace them with smart appliances or have your older appliances retrofitted with ZigBee chips so they can become part of the Internet of Things monitored by Big Brother.

John Thomas has written an exceptional article about 5G, its potentials and problems, including its determined rollout. However, once you realize what’s going on, you probably will start to wonder: “Where can I run to hide?”
Nowhere! That’s the problem infatuation with technology has created: a society so besotted with technology, consumers willingly allow themselves to be surveilled and monitored every moment of their life and, therefore, personal privacy will be lost, plus your home will become an open forum for all who can, to hack into or to exploit.

Just imagine what happens if you, or most of the folks you love and know, become electromagnetic hypersensitive (EHS) from constant exposure to EMFs/RFs/ELFs because of wanting faster Wi-Fi.

Here’s a 52 minute documentary, Wi-Fi Refugees. Learn what it’s like to have EHS and experience the adverse effects of microwave technology.