It looks the same – the bread, pies, sodas, even corn on the cob. So much of what we eat every day looks just like it did 20 years ago. But something profoundly different has happened without our knowledge or consent. And according to leading doctors, what we don’t know is already hurting us big time. 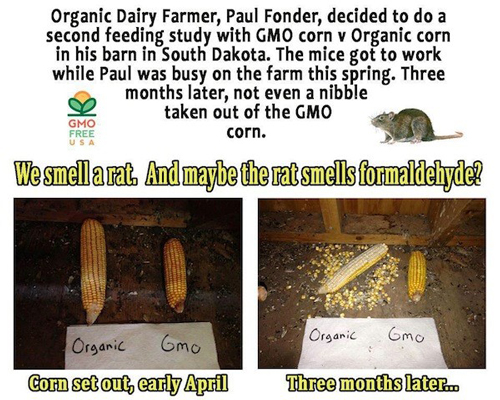 For the first time in history, bacteria, plants and animals can all be mixed up together. For example, right now the DNA of bacteria is put into food plants.
The two primary reasons why plants are genetically engineered are to allow them to:
– Drink poison, or
– Produce poison.

The poison drinkers are inserted with genes from bacteria that allow them to survive otherwise deadly doses of herbicides. The main poison is GMOs is glyphosate, the poison that is in Roundup. Biotech companies sell the seed and herbicide as a package deal, and farmers can then use hundreds of millions of pounds more herbicide than would normally be possible without the plants dying.
The poison producers are called Bt crops. Inserted genes from the bacteria produce a pesticide (poison) in every cell of the plant. What kills insects kills us. This is a pesticide which is inside the plant. You cannot wash it off!

More than 70% of the foods on supermarket shelves contain GM foods. Get a magnifying glass and read the list of ingredients. Unless the following are organic, do not eat them:
– Corn
– Soy
– Canola
– Cotton seed
– Sugar (beet sugar is GMO, raw cane sugar so far is fine)
– Hawaiian papaya
– Zucchini and crook neck squash
Other countries have or import GMO rice and potato.
But it gets worse. Since we now have genetically modified alfalfa, and alfalfa, corn and soy are fed to animals, unless it’s organic, you should not eat:
– Dairy
– Meat (do not eat it in any case)
– Eggs
– Farm-raised fish or seafood (best not to eat it at all)

Glyphosate has even been found in the bodies of dairy cows in Denmark, because Europe imports GMO feed! So you know it has to be in the milk.

This is why people aware about their health no longer eat out anywhere. Since no restaurant uses organic, GMO-free food, or gives you a full list of ingredients, you are bound to be eating poison in virtually every restaurant, fast-food joint and school canteen.

Organic food is meant to be free of GMOs. But we are starting to find out that even this is not a guarantee. It’s way too easy to sneak in. There have been so far at least two instances discovered where GMOs were found in so-called “organic” food. In each case, this discovery was not made by organizations that should protect you, like the FDA. They were made by independent bodies. Baby food is one. Which is really scary. The only food a baby should have is breast milk and, when ready for solids, homemade baby food and pure water.

Kashi “organic” cereal is another. The Cornucopia Institute found that Kashi has high levels of GMOs in its “organic” cereal. You may be less surprised at this once you realize that Kashi is not owned by nature-lovers, but by the Kellogg’s corporation.

In the first long-term study of GMOs, rats fed a lifelong diet of one of genetically modified corn grew tumours and had multiple organ damage, of the liver and kidneys.
Corn is meant to be nutritious. It is not meant to do this: 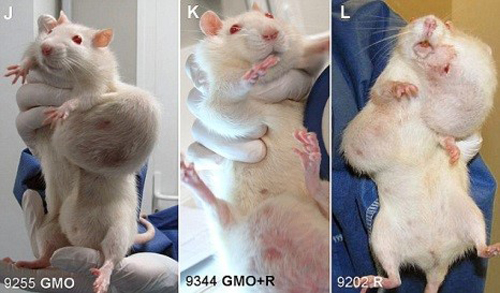 When Genetically Modified Organisms (GMOs) were first created, some people knew they were very bad. But no one really knew just how bad they are. We know that now. Basically, not only are they killing people, because they are so highly toxic, they are also doing something very different to normal food, that in the longer term they will wipe out the human race if not eradicated completely. Because animals fed GMOs do not have great grandchildren. No other toxic food does that! This is proof that we are dealing with something completely different and evil.

Concerning the experiment carried out jointly by the National Association for Gene Security and the Institute of Ecological and Evolutional Problems, Dr. Alexei Surov said: “We selected several groups of hamsters, kept them in pairs in cells and gave them ordinary food as always.”
“We did not add anything for one group but the other was fed with soya that contained no GM components, while the third group with some content of Genetically Modified Organisms and the fourth one with increased amount of GMO. We monitored their behaviour and how they gain weight and when they give birth to their cubs. Originally, everything went smoothly. However, we noticed quite a serious effect when we selected new pairs from their cubs and continued to feed them as before. These pairs’ growth rate was slower and they reached their sexual maturity more slowly. When we got some of their cubs we formed the new pairs of the third generation. We failed to get cubs from these pairs, which were fed with GM foodstuffs. It was proved that these pairs lost their ability to give birth to their cubs,” Dr. Alexei Surov said.

Another surprise was discovered by scientists in hamsters of the third generation. Hair grew in the mouth of the animals that took part in the experiment.

GMOs remain inside of us

The only published human feeding study revealed one of the most dangerous problems from GM foods. The gene inserted into GM soy transfers into the DNA of bacteria living inside our intestines and continues to function. This means that long after we stop eating GMOs, we may still have potentially harmful GM proteins produced continuously inside of us.

Put more plainly, eating a corn chip produced from Bt corn might transform our intestinal bacteria into living pesticide factories, possibly for the rest of our lives.
Please, get this information to all your family and friends!

Some say the damage to the intestinal bacteria that GMOs produce may be undone by monolaurin (from coconut), but this needs to be researched thoroughly. It’s been reported to help to heal Lyme’s disease.

If GMOs did nothing, then organs of animals fed GMOs should look exactly the same as normal. But they look radically different, as you can see from this photo: 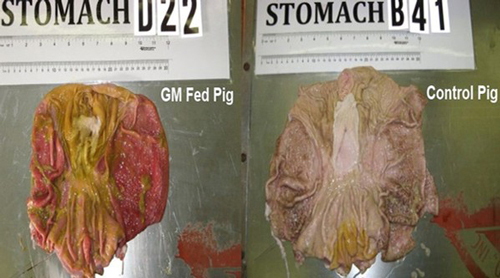 If you that still does not convince you that it is deadly serious that you become obsessive about getting GMOs out of your diet, here’s another pic that proves that GMOs seriously alter the whole body. This photo is a comparison of rat testicles: 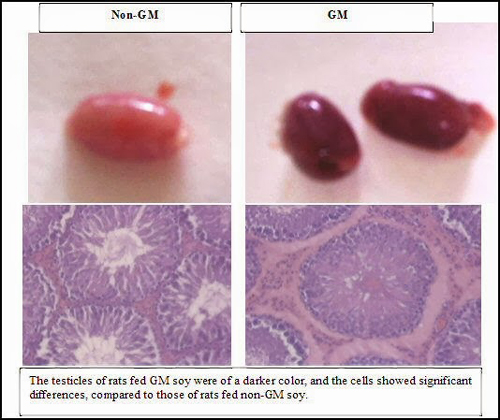 People are dying at very early ages, and you know from seeing these pictures of totally changed organs, that GMOs are a major, if not the major cause, behind it. You won’t hear about this in the media, because the power of Monsanto goes nearly everywhere.
Wake up and totally get GMOs and all other toxins out of your life.

GMOs need to be banned totally, not just labelled

They kill. And the pollen from GMO plants goes everywhere, and is infecting non-GMO plants.

More information on GMOs:
- GMOs in Beer
- GMOs by Country
– GMO genes are jumping species!
– Scientists get Fired for Finding that GMOs are Really Bad for us
– Kevlar Tires now required to Traverse “Spear-like” GMO crops
– GMO Bananas, Rice, Potatoes, Sugar Cane are on the way
- The Non-GMO Project
– GMO Grass Set for Lawns Across US – No Regulation Needed
– Who is really Mon-Satan (Monsanto), truly the corporation of evil? The Complete History of Monsanto

The Grand Strategy of the Reptilians