Historical first: Robot granted citizenship in Saudi Arabia even though “she” has no consciousness 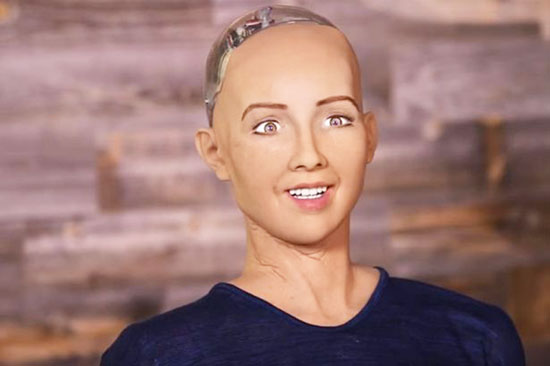 Saudi Arabia has made history by becoming the first country to grant a robot citizenship. Sophia, a humanoid robot designed by Hong Kong-based firm Hanson Robotics, expressed delight at her new status. Speaking at the Future Investment Initiative conference in Riyadh, Sophia said: “I am very honored and proud for this unique distinction. This is historical to be the first robot in the world to be recognized with a citizenship.”

Sophia, who was made to look like Audrey Hepburn, is Hanson Robotics’ most advanced robot yet. More than just being able to convey emotions, she can “interact” with humans and hold conversations. In one famous instance, Sophia even made a surprise appearance as a panelist at a United Nations (U.N.) technology event held in New York. There, she spoke with U.N. Deputy Secretary-General, Amina J. Mohammed on how artificial intelligence (AI) could “proficiently distribute the world’s existing resources like food and energy”.

Her “sentiments” on the potential of AI have been echoed by the likes of Masayoshi Son, chief executive officer of telecommunications giant SoftBank Group Corp. At the same conference as Sophia, Son declared that AI will achieve an IQ of 10,000 by the year 2047. Though he acknowledged that AI will never be able to match humans in creativity, Son has stated that we will be outshone in all other areas.

“We mankind created tools, the premise was mankind were always smarter than the tool we invented so we control. This is the first time… the tool becomes smarter than ourselves” Son claimed. He further added: “Singularity is the concept that [mankind’s] brain will be surpassed, this is the tipping point, crossing point, that artificial intelligence, computer intelligence surpass [mankind’s] brain and that is happening in this century for sure.”

Perhaps then this is why Saudi Arabia decided to make Sophia a Saudi citizen? While she may not possess the same level of consciousness that humans have, Sophia’s intellectual capabilities can’t simply be waved off. After all, that’s what Dr. David Hanson, American roboticist and Sophia’s creator, has set out to do.

And while Sophia may be happy with her Saudi citizenship, the move has elicited a flurry of responses online, with many of them being assertions of surprise and confusion. The backlash in itself is unsurprising, as Saudi Arabia is notorious for being one of the most oppressive states for women and foreigners.

Their ban on female drivers was lifted only in the end of 2017, and the Saudi guardianship system requires women to have male companions with them in public places at all times. When Sophia appeared before an audience at Riyadh, she stood unaccompanied and bare of the customary headscarf and cloak that Saudi women have to wear in public.

This did not go unnoticed. “Sophia has no guardian, doesn’t wear an abaya or cover up – how come?” asked one Twitter user.
Another Twitter user by the name of Kalkal Trivedi tweeted: “Saudi Arabia treats living, breathing women as second class citizens, but has no problem granting citizenship to robots?”
“A humanoid robot called Sophia got Saudi citizenship, while millions linger stateless. What a time to be alive” wrote user Kareem Chehayeb.

Valid points all, and they raise questions on Saudi Arabia’s priorities and the ethical implications of endowing robots with human rights. Why give a humanoid robot – no matter how “intelligent” she may seem – rights before the citizens of your own country? If Sophia can be bestowed citizenship despite her not voting in elections or owning property, does the action trivialize human rights? Is this bizarre turn of events a preview of things to come?