How Does Nicotine Affect the Brain?

Nicotine is a substance that triggers an artificial sense of well-being. At the same time, it makes the brain age prematurely and this, in turn, affects some intellectual abilities. 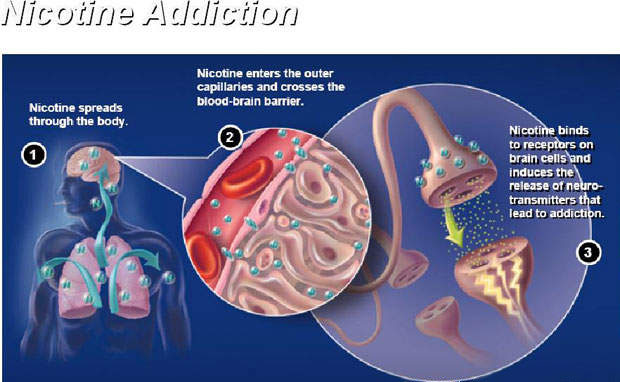 For a long time, many people ignored the fact that nicotine use can lead to addiction. However, scientists have discovered that this substance can lead to a dependence similar to hard drugs such as cocaine or amphetamines.

Nicotine is able to modify the brain. Through complex mechanisms, it provokes changes in the brain’s rewards system. In other words, it creates a pleasurable sensation that the brain starts to become dependent on. This makes the body need the substance.

Only the smoker can decide if they’ll quit smoking. The decision and process are both difficult, but not impossible. The following information is simply meant to illustrate the effects of nicotine on the brain so that smokers aren’t taken by surprise.

“Take care of your body. It’s the only place you have to live.” – Jim Rohn

How nicotine operates in the brain

When a person consumes nicotine, a group of the brain’s acetylcholine receptors is activated. These receptors cause dopamine to be released. Dopamine is a neurotransmitter linked to feelings of motivation and pleasure. In short, smoking induces a chemically-induced feeling of well-being.

The body quickly carries nicotine to the brain. It’s estimated that it only takes between ten and fifteen seconds for nicotine to pass from the lungs through the bloodstream. Studies indicate that any substance that we smoke is potentially addictive, precisely because of how quickly the feeling of well-being is generated.

When you consume nicotine or another similar drug, the brain quickly reaches a state of well-being. If this occurs frequently, the brain becomes less and less able to generate pleasurable sensations that aren’t associated with the consumption of the substance. In other words, it becomes more difficult to enjoy the same satisfaction through natural means.

At the same time, the brain begins to crave that state of well-being relatively often. Due to this, uncomfortable symptoms such as restlessness, nervousness, and anxiety may manifest, which leads the person to consume to put an end to them.
This doesn’t happen when the brain experiences pleasure naturally. In addition, over time, the brain becomes conditioned. It anticipates a feeling of well-being, which leads to an uncontrollable smoking habit.

The harmful effects of smoking

The production of cigarettes is in the hands of large multinational companies. They’ve spared no effort in studying consumer behavior and promoting addiction. They regulate the amount of nicotine in each cigarette so that dependence is maintained. They make packs of 20 cigarettes because studies have shown that any greater amount per day generates displeasure. Everything is carefully planned.

Nicotine makes the brain age faster. It decreases the brain’s ability to solve problems, make decisions, learn, and control impulses. This substance leads to the weakening of the brain’s orbitofrontal cortex. It also makes the consumer become more vulnerable to other addictions.

Quitting smoking isn’t easy, precisely due to everything we explained above. To do it, a person needs a strong will and an effective strategy. It’s best to stop smoking completely, not gradually. At the same time, creating a system of incentives and reinforcements can prove helpful.