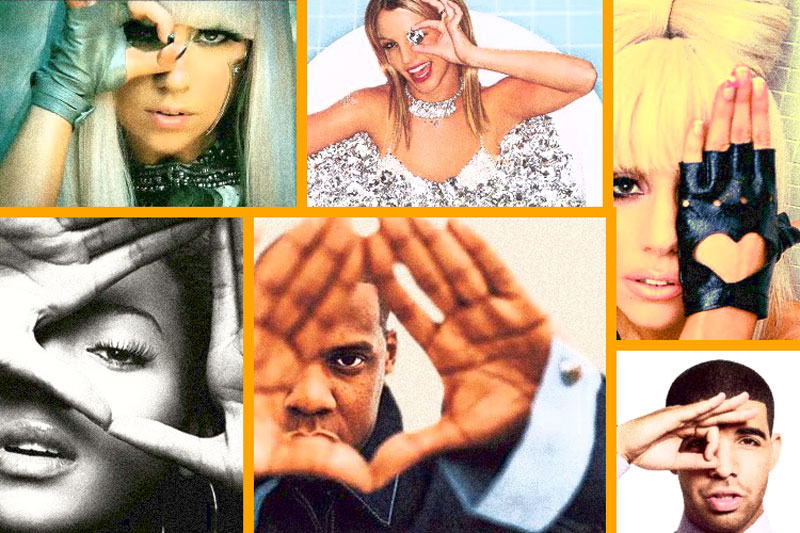 A continuous assault on the public psyche by the entertainment industrial complex aims to disorganize and derail the individual. It’s a world governed by terror, and to find relief from such continual fear and stress we’re invited to seek shelter in meaningless, self-destructive habits and pursuits.

Via the 24/7 news cycle format, the media keeps the shock and awe flowing, and corporate pop-culture is the escape. Pop stars are selected for their helplessness against the MK Ultra/Monarch-type mind control. This kind of programming is necessary to turn people into celebrity puppets whose behavior is to be emulated by the public. The stars that do this best become icons of Illuminati symbolism, using their careers and souls to pimp occult messages and ideas to the masses.

Take the one-eye covered celebrity photo meme. They all do it. Is it just a creative coincidence, or are these stars required to strike this pose? If it’s in their contract to do this, what does it mean? 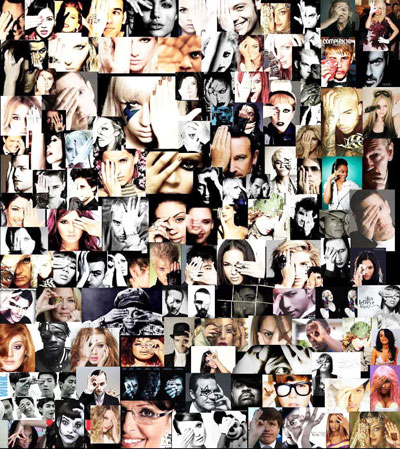 Handlers employed by the multi-trillion dollar entertainment industry craft these celebrities from children, subjecting them to various abusive forms of psychological torture. They are programmed to play the role of fame and success, but are ultimately wired to self-destruct before the entire world.

Miley Cyrus, Ariana Grande, Katy Perry and Amanda Bynes are a few of our contemporaries.

Roseanne Barr spoke about MK Ultra programming in Hollywood in an interview with Abbey Martin:

Many other celebrities have also spoken out. Corey Feldman went public with claims that Hollywood culture is rife with pedophilia, which is a powerful means of psychologically destroying a child.

Bill Clinton even admitted that the government has been engaged in MK Ultra type programs where experiments were carried out on unwitting persons.

This, the Illuminati mind-controlled celebrity conspiracy is ubiquitous and the symbolism of the occult, of pedophilia, and of the Illuminati is everywhere.

Being subjected to Monarch programming and MK Ultra conditioning develops a form of schizophrenia in the victim, causing them to take on two distinct personalities.

One personality is able to perform whatever degrading, self-deprecating behavior is necessary to pull off such ritualistic, ridiculous public performances. The other personality, the true and private self is subdued, eventually begging for help.

This is what happened with Katy Perry in the Summer of 2017, who publicly broke down, went on a psychotic fit on stage, then ended up making bizarre public statements about wanting to be herself again.

She shaved her head, as many of these stars do as a first step in re-crafting an identity out of a shattered psyche. Britney Spears went through a nearly identical breakdown https://vigilantcitizen.com/musicbusiness/britney-spears-mind-control-and-hold-it-against-me/ at the end of her career.

This sets an example for those in the audience. Be outrageous. Be a puppet. Destroy yourself.

What is the Purpose?

“…as I looked more closely at the way that power is asserted over us, it became more obvious how much mainstream pop culture (and in particularly, music videos) syndicates a puppet-mentality, where bodies are seemingly controlled and manipulated by outside forces. Yet despite the dark, occult imagery that we’re used to seeing in videos by the likes of Rihanna, Lady Gaga, Justin Bieber, Beyonce and Britney Spears, their music maintains a saccharine quality which creates a disturbing discord. Is there a hidden agenda behind the creation of these pop icons and are young people being conditioned to accept hyper-sexualization, militarization, and mental and physical torture with this sugar-coated, Disneyfied pop culture?” Dance Choreographer, Rosie Kay

The goal is to take a young person, celebritize them  and put them on stage to share the Illuminati values of over-sexualization, debauchery, slavery, spiritual degradation, consumerism, and worship of money and authority.

This is an ongoing psychological experiment which has done more than perhaps any other existing program in marketing the culture of death to each new generation.

Self-destruction has been presented as the highest form of personal achievement. In this culture, nothing is shocking. Not permanent war, nor surveillance, police brutality, corruption, environmental destruction, nothing.

The pervasive Illuminati symbols in our culture subvert our natural, independent and humanistic values with a pernicious onslaught of stupidity, absurdity, sexualized garbage and escape through intoxication. In no other cultural arena is the social engineering and moral manipulation more prevalent than in the world of pop-entertainment.

“The elite agenda is rooted in fear, panic, and terror. Such emotion is a golden currency, an invaluable asset that can be used to shape and mold society with little to no resistance.” – Vigilant Citizen