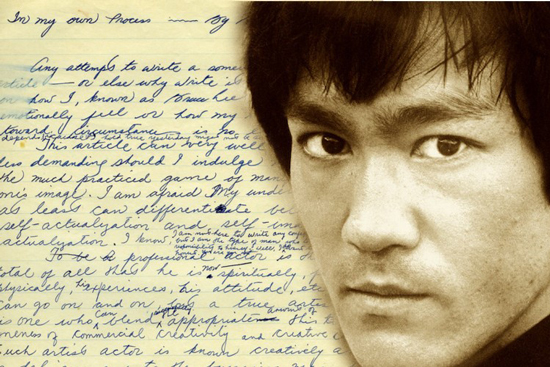 True martial arts is a path of spiritual awakening revealed through dedication to practice and commitment to understanding yourself better at each stage of life. Bruce Lee is the world’s most iconic martial artist as well as a contemporary spiritual philosopher, and in his personal journals he documented his own psychological and spiritual awakening.

In the last years of his life he wrote a number of letters and articles to himself regarding his own personal journey of self-actualization, and while never published, these documents emphasize that the process of personal awakening is one of the most important undertakings any human being can take on.

Archived by the Bruce Lee Foundation, these intensely personal notes have a great deal to offer today’s seekers working to uncover their truest potential. Here, Lee asks the most important question anyone can ask themselves: “Who am I?”:
“At the moment I’m wondering for whom am I writing this organized mess? I have to say I am writing whatever wants to be written.
I have come to the realization that sooner or later what it really amounts to is the bare fact that even an attempt to really write something about one’s self demands, first of all, an honesty towards oneself to be able to take responsibility to be what we actually are…
What it boils down to is my sincere and honest revelation of a man called Bruce Lee. Just who is Bruce Lee? Where is he heading? What does he hope to discover? To do this a person has to stand on his own two feet and find out the cause of ignorance. For the lazy and hopeless, they can forget it and do what they like best.”

Most people spend their lives avoiding these questions or distracting themselves, however Bruce confronted these questions directly, and was apparently working on a manuscript entitled In My Own Process. 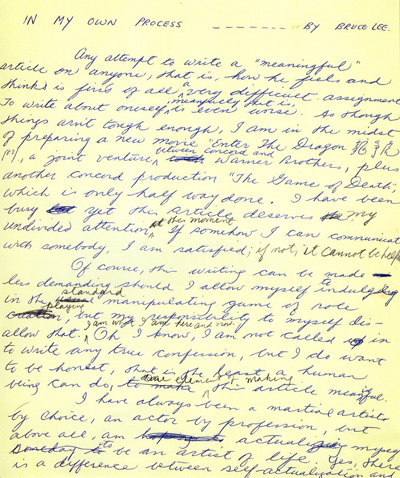 In these journals, Lee discusses the difference between self-actualization and self-image actualization, distinguishing between being your true self rather than creating an image of yourself based on society’s expectations of you.
“Of course, this writing can be made less demanding should I allow myself to indulge in the standard manipulating game of role playing, but my responsibility to myself disallows that… I do want to be honest, that is the least a human being can do… I have always been a martial artist by choice, an actor by profession, but above all, am actualizing myself someday to be an artist of life. Yes, there is a difference between self-actualization and self-image actualization.”

The wisdom Lee revealed in these papers is perhaps best summarized in the following quotation where he acknowledges the understanding that his life, and therefore all of our lives, are processes, and we are never fully complete until the Revelation of our Godly Immortal Self. So long as we continue to inwardly reflect and pursue self-inquiry, we will continue to grow as spiritual beings.

“I have come to accept life as a process, and am satisfied that in my ever-going process I am constantly discovering, expanding, finding the cause of my ignorance, in martial art and especially in life. In short, to be real…
The truth is that life is an ever going process ever renewing and it just meant to be lived but not lived for. It is something that cannot be squeezed into a self-constructed security pattern, a game of rigid control and clever manipulation. Instead, to be what I term ‘a quality human being’ one has to be transparently real and have the courage to be what he is.”

“Where some people have a self, most people have a void, because they are too busy in wasting their vital creative energy to project themselves as this or that, dedicating their lives to actualizing a concept of what they should be like rather than actualizing their potentiality as a human being, a sort of being vs. having – that is, we do not have mind, we are simply also the mind. We are what we are.”

At the stage in his life, just prior to his surprising death, Lee was arriving at similar conclusions as many of the world’s greatest philosophers and sages.
In The Book of Five Rings, legendary Samurai Miyamoto Musashi wrote: “There is nothing outside of yourself that can ever enable you to get better, stronger, richer, quicker, or smarter. Everything is within. Everything exists. Seek nothing outside of yourself.”

Eminent mythic scholar Joseph Campbell is noted for saying: “The privilege of a lifetime is being who you are.”
It is even inscribed on the ancient Hellenic sanctuary at Delphi in Greece, “nosce te ipsum”, or “know thyself”.

There a number of other inspiring and eye-opening notes in these unpublished letters, which are discussed in this podcast from the Bruce Lee Foundation.