Is Autism a side effect of metal toxicity? High aluminum concentrations discovered in brain tissue of autistic children 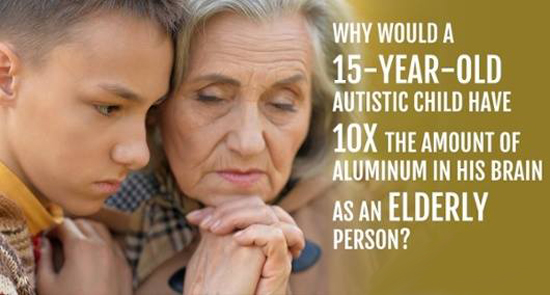 It’s a well-known fact that even the smallest amount of aluminum, if found in a person’s brain tissue, can become a huge problem. There have also been many studies that look into how having high-levels of aluminum in brain tissue is correlated with neurological conditions such as Alzheimer’s disease. Now a new study puts the spotlight on autism spectrum disorder (ASD), and tests to see if there might be a connection between it and having high-levels of aluminum in the brain.
The study, which was first published in the Journal of Trace Elements in Medicine and Biology, shows some of the highest levels of aluminum ever recorded in human brain tissue. The data was gathered from the brains of 10 donors who had ASD. The study was led by Dr. Christopher Exley, one of the world’s leading experts on aluminum toxicity, from Keele University.

Using a carefully-crafted two-pronged study method, the researchers of the study were able to measure and characterize aluminum deposits found in the brain tissues of the 10 ASD donors, most of whom reportedly died in their teens or twenties. The results of the study show “consistently high” aluminum levels based on data from both the quantitative component as well as its qualitative component, which is said to represent “some of the highest values for brain aluminum content ever measured in healthy or diseased tissues”.

Findings of the research

The study is interesting for its use of a two-pronged approach that contains both a quantitative as well as a qualitative component. The former required the use of graphite furnace atomic absorption spectrometry or GRAAS, which measures aluminum content in frozen brain tissue samples; the latter uses a technique called fluorescence microscopy to visualize aluminum deposits in the brain. In total, the researchers were able to quantify aluminum levels in 59 tissue samples that were sourced from five different areas of the brain.

After testing, the researchers found that all samples showed a “pathologically significant” level of aluminum, certainly more than what might be considered normal. Male brains in particular showed high aluminum levels, including that from a 15-year old boy with ASD who ended up being the one with the single highest brain aluminum measurement. And as for how exactly all that aluminum ended up in their brains, the research results strongly suggest that it was due to cells that entered while loaded with aluminum in the periphery.

The case is made for the entrance of the aluminum through aluminum adjuvants in vaccines, which are used by vaccine manufacturers to intensify the immune response of vaccine recipients. According to the researchers, the use of aluminum-adjuvant-containing vaccines “has been directly correlated with increasing prevalence of ASD”, particularly in teens and young adults.

Implications for the future

More than half a decade ago, in 2011, a separate study showed that children from countries with the highest ASD prevalence also had the highest exposure to aluminum from vaccines. This goes along nicely with the findings of Dr. Exley, who notes that “There are no ‘normal’ levels of brain aluminum”. Meaning “its presence in brain tissue, at any level, could be construed as abnormal”.

Based on the results and conclusions of the study, it may be time to take a closer look at how vaccines are administered, especially since more and more children and teenagers are getting them with each passing day. Not only for the risk of reducing the rates of ASD but also to prevent other conditions such as Alzheimer’s disease. Of course, implementing rules that will change things for the better is a different matter entirely. Time will tell whether or not this improves in the future.