Is It Russian Surrender that Is on the Agenda or World War 3? 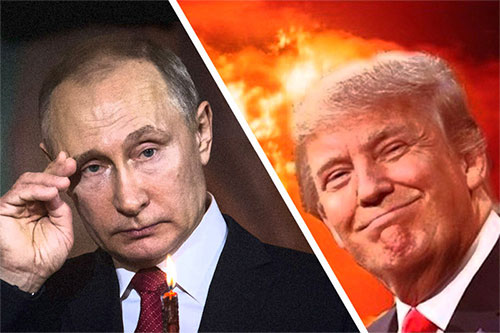 “As US President Donald Trump is said to be considering a full scale ground assault against the Syrian administration of President Bashar al-Assad, the top UN official has decried the onset of a new global Cold War and warned against «full-blown military escalation» in the war-torn region.”

If this report of a US ground invasion of Syria is true, which seems unprobably, it will be a consequence of Russian passivity in the face of Washington’s aggression.

Is the Russian government too humane to comprehend the evil that Russia confronts?
If Russia and China do not take steps to defeat the US before Washington forces nuclear war on the world, we are all doomed.

The American people are denied information, are uninformed, and helpless. The same is true for Europe and Britain, Canada, Australia, Japan. Even if the people knew, they are impotent.

The Russian government does not understand that the “rule of law” constructed by Washington is not a rule of law. It is a rule of Washington’s rule. Washington owns Europe, Canada, Australia, Japan, the Atlanticist Integrationists inside Russia, and the UN. This is why Russia’s appeal to the UN is pointless, as Russia just again learned.

To restate the point once again, the passivity of the Putin government in the face of Washington’s aggressiveness is leading directly to nuclear war and the end of life on earth.

Improve Your Posture With This 30-Day Challenge