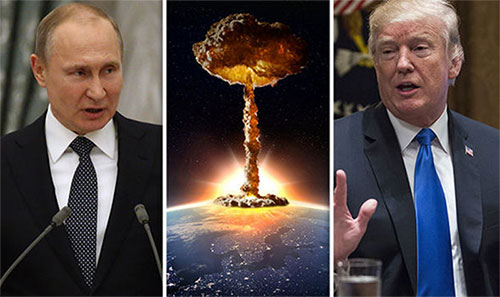 It speaks to the humanity and moral greatness of the Russian government led by Vladimir Putin that Russia consented to a pretend attack in order that Donald Trump could save face. Unfortunately for us all, the consequences of Russia’s generosity will not be the thanks that the Russians deserve. Russia and Putin will get no credit for saving Trump from having to back down or have his naval flotilla sunk and his bombers shot down.

Russia is intent on avoiding a conflict, not because Russia is scared of the US military, but because Russia understands it is dealing with a government of psychopaths that are willing to destroy not only seven Muslim countries in whole or part within the past 17 years, but also the entirety of humanity. Therefore, Putin sidesteps each orchestrated confrontation and stands on international law and legal norms.

The result, however, is not what a humane person would expect. The result of Russian humaneness is to provoke more provocations from the evil that is the West.

What you can hear on TV is astonishing. You could not believe the lies that Trump, members of his government, and the presstitutes were telling Americans and the world. Here is Stephen Lendman’s report on some of the lies.

Only readers of alternative media will ever know that the only reason thousands of US sailors and dozens of US pilots are still alive is that Russia spared their lives.

Although the Russian government has every good intention, Russia’s moral conscience and consideration for others is leading the world to Armageddon. The reason is that the neoconservatives who control US foreign policy are not going to stop orchestrating events that they blame on Russia. The longer Russia waits before it finally puts its foot down, the stronger the provocations will become. The successive provocations will narrow down Russia’s response to surrender or nuclear war.

The Syrian provocation was an ideal one for Russia to put its foot down. Russia held the military cards. Russia could easily have destroyed every ship and every airplane. Having made the consequences clear in advance to the world, the US would have backed off. The defeat of America without a shot fired would have undermined the crazed neoconservatives who intend US world hegemony.

Under such a clear statement from Russia that the American force would be completely and utterly destroyed, the US Joint Chiefs of Staff would have prevented the attack.

As long as Russia accommodates Washington’s aggressiveness, the agressiveness will continue to increase.

At times I think that Russia is relying on the Western peoples to wake up to the gratuitous dangerous confrontations that are being provoked in their name. In fact, the Western peoples are helpless. Neither Washington nor the governments of Washington’s British and French vassals consulted the people or the people’s elected representatives about launching a military attack on another country. This fact shows conclusively that neither the US, UK, or France have any respect for law and their own alleged democracies and that the counries have governments that are unaccountable to the peoples.

The British and French governments are accountable to Washington, and Washington is accountable to the military/security complex and Israel, which history shows can unseat any US Senator and Representative.

The victory and its insuficiency combine to lead to worse provocations. The next provocation will be orchestrated in a situation more favorable to US than to Russian arms. Washington will not again risk a confrontation, as it did in Syria, where it clearly would have lost. What this means is that Russia’s humanity and moral conscience will result in a confrontation far more dangerous to Russia and to all of us.

As Paul Craig Roberts wrote, “It would be a mistake to conclude that diplomacy has prevailed and common sense has returned to Washington. Nothing could be further from the truth. The issue is not resolved. War remains on the horizon.”

Is It Russian Surrender that Is on the Agenda or World War 3?