An odd piece of footage from the UK shows some kind of glowing anomaly flying in circles through the sky over a famed UFO hot spot.

The video was captured by a man who lives in the town of Frome as he was overlooking a conservation area known as Cley Hill.

The location has long been a destination for UFO enthusiasts who have flocked to the hill for decades due to tales of anomalous lights and other strange sights spotted in the sky from that vantage point. 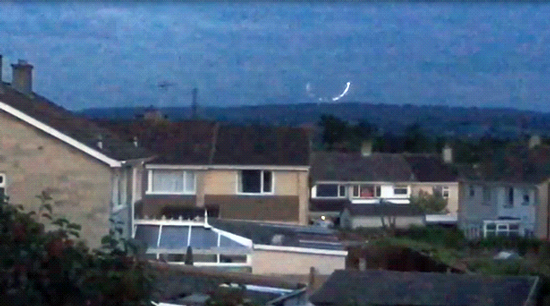 In this most recent incident, a puzzling light can be seen streaking in a mesmerizing circular fashion contrasted against the dark night sky. Despite the site’s reputation for UFO activity, the witness theorized to the newspaper Somerset Live that the object was probably “a drone with a fancy flame effect tail or something.” He went on to say that the object had been previously sighted by residents over the last few weeks, suggesting that the ET explanation for the UFO may be a stretch.

However, some have proposed an almost-as-intriguing alternative for the strange “dancing” light in that it could be some kind of military craft being tested at a base known to be nearby.