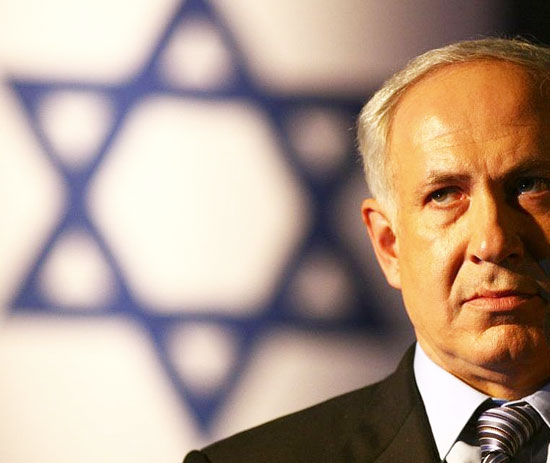 War on Terror has become a catch cry phrase after the biggest of all false flag operations, September 11

While it’s true that 9/11 became the pretext for the War on Terror™, and catapulted the doctrine from an idea to official US policy (and a preeminent Western ideology going into the 21st century), the idea didn’t originate with the George W. Bush administration.

The origins of the phrase War on Terror can actually be traced back to around 1979 and to another infamous New World Order agenda-pusher by the name of Benjamin Netanyahu, the current Prime Minister of Israel.

The War on Terror™ has become such a hackneyed phrase that it’s worthy of being trademarked and corporatized, if the Military Industrial Complex hasn’t done so already.

Think of how much carnage, death and destruction have been wrought in the name of fighting the War on Terror™ and its various offshoots such as Radical Islamic Terrorism™ – millions of people killed in Afghanistan, Iraq, Libya, Pakistan, Yemen, Syria, Palestine and more – and there’s no sign of it stopping.
The War on Terror™ is the ultimate abstract endless war against a nebulous faceless enemy. It’s not going to stop until enough people see through the deception.

Meet Benjamin Netanyahu, Inventor of the War on Terror 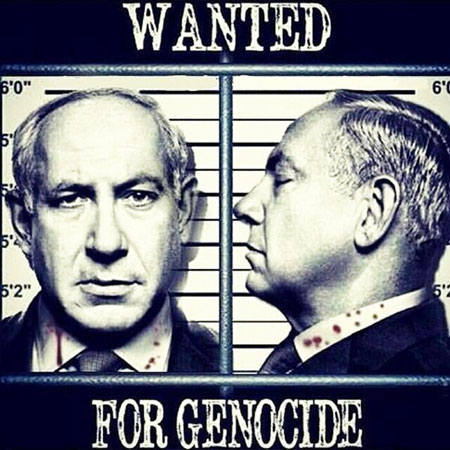 Netanyahu is more than just an Israeli politician. Netanyahu’s father, Benzion Netanyahu, was a leader of Revisionist Zionism, a colonialist, aggressive, xenophobic and expansionist form of Israeli nationalism founded by Ze’ev Jabotinsky in the early part of the 20th century. Netanyahu was already talking about terrorism in 1979 when he wrote his book International Terrorism: Challenge and Response that year. He wrote another book on terrorism in 1995, a major work entitled Fighting Terrorism: How Democracies Can Defeat Domestic and International Terrorism.

The book explains all sorts of themes that have now become public knowledge and household terms and ideas: terrorism, radical Islamic suicide attacks and Iran pursuing a nuclear program. He repeatedly uses the phrase “Weapons of Mass Annihilation” throughout the book – now you know where the term “WMD” (Weapons of Mass Destruction) originated from!

Netanyahu is not a prophet but rather a driver of these agendas. Using the immense power of Zionism, Jewish lobbies in America and the Jewish international banking cabal, he persuaded the US to align itself with Israel and view Islam as the next great enemy.

According to this source, Netanyahu made a speech in Israel at the Jewish Agency Assembly Plenary meeting held in Israel on June 24th, 2001 (2-3 months before 9/11) where he made these points:

“1. The Palestinians are to blame for the conflict in the Middle East, and specifically Yasser Arafat.

2. It is legitimate for established states to engage in wars, because the societies are imperfect.

3. Palestinians are not waging a legitimate war (like established states using regular armies) and are terrorists.

5. The Israelis are responding in self-defense.

6. When the Israelis respond, they respond against combatants.

7. Arafat and the Palestinian Authority are committed to the destruction of the State of Israel.

8. Arafat and the Palestinian Authority are using the illegitimate and criminal means of terrorism.

9. The Palestinians are wrong and the Israelis are right.

12. To stop terrorism, one must make the terrorist regime pay very heavily.

13. The root core of the Middle East conflict is the existential opposition by a great many in the Arab world still and certainly by the Palestinian leadership to Israel’s very existence.

14. The first way of ensuring Israel’s existence is that the Arabs simply understand that Israel is so powerful, so permanent, so unconquerable in every way that they will simply abandon by the force of the inertia of Israel’s permanence all opposition to Israel.

15. The second way [of ensuring Israel’s existence] is for the forces of democratization get to the Arab regimes.

16. Using propaganda techniques, like broadcasting American television serials (which Netanyahu sees as subversive material) will ultimately bring down regimes like the Ayatollah regime and the Khomeini regime in Iran.

Note how he was already setting up a distinction between “legitimate” war and “illegitimate” war, thus trying to provide a legal and moral justification for war (which is legalized violence and mass murder) that would be initiated by Israel, the US and allies in the years to come against the Palestinians and other Muslim-majority nations. He made the point that states using regular armies can engage in legitimate war, but not loose bands of fighters which he brands terrorists. 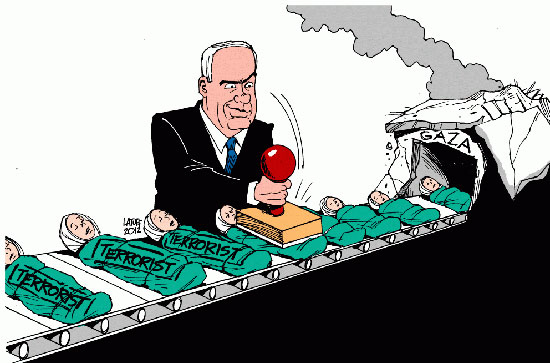 Soon thereafter, George W. Bush declared the Netanyahu doctrine of War on Terror as official US policy on September 20, 2001: “We will pursue nations that provide aid or safe haven to terrorism. Every nation, in every region, now has a decision to make. Either you are with us, or you are with the terrorists. From this day forward, any nation that continues to harbor or support terrorism will be regarded by the United States as a hostile regime… the civilized world is rallying to America’s side. They understand that if this terror goes unpunished, their own cities, their own citizens may be next. Terror, unanswered, can not only bring down buildings, it can threaten the stability of legitimate governments.”

This speech included the famous “you’re either with us or with the terrorists” ultimatum, a manipulative way to force other nations to take sides and to make a complex issue black and white. It also echoed Netanyahu’s concept of “legitimate” nations, “legitimate” war and “legitimate” government. 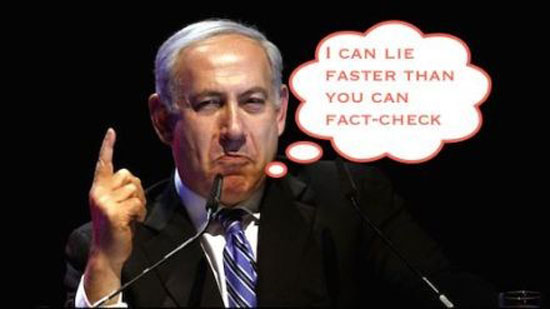 It wasn’t long before Netanyahu expanded this now official War on Terror doctrine to include Israel. Netanyahu now expanded upon the childish “Us” vs. “Them” demarcation set up by Bush to make it “US, Israel and the civilized democracies of the world” vs. “Iraq, Iran, Afghanistan and other Arab and Muslim dictatorships of the world.”

Here are the main points of his speech on April 10, 2002 in front of the US Senate, from the same source:

“1. The American victory against terror in Afghanistan is only the first step in dismantling the global terrorist network. The other terrorist regimes must now be rapidly dealt with in similar fashion.

2. Israel, a democratic government that is defending itself against terror should not be equated with the Palestinian dictatorship that is perpetrating it.

3. Israel should not be asked to stop fighting terror and return to a negotiating table with a regime that is committed to the destruction of the Jewish State and openly embraces terror.

4. Israel has the right to defend itself.

5. The government of Israel must fight not only to defend its people, restore a dangerously eroded deterrence and secure the Jewish State, but also to ensure that the free world wins the war against terror in this pivotal arena in the heart of the Middle East.

6. Israel must dismantle Arafat’s terrorist regime and expel Arafat from the region.

7. Israel must clean out terrorists, weapons, and explosives from all Palestinian controlled areas.

9. There can never be a political solution for terror. The grievance of terrorists can never be redressed through diplomacy. That will only encourage more terror. Yasser Arafat’s terrorist regime must be toppled, not courted. The Oslo agreements are dead. Yasser Arafat killed them.

10. A political process can only begin when this terrorist regime is dismantled.

11. The urgent need to topple Saddam is paramount. The commitment of America and Britain to dismantle this terrorist dictatorship before it obtains nuclear weapons deserves the unconditional support of all sane governments.

12. America must show that it will not heed the international call to stop Israel from exercising its right to defend itself. If America compromises its principles and joins in the chorus of those who demand that Israel disengage, the war on terror will be undermined.

13. For if the world begins to believe that America may deviate from its principles, terrorist regimes that might have otherwise been deterred will not be deterred. Those that might have crumbled under the weight of American resolve will not crumble. As a result, winning the war will prove far more difficult, perhaps impossible.

14. To assure that the evil of terrorism does not reemerge a decade or two from now, we must not merely uproot terror, but also plant the seeds of freedom.

15. It is imperative that once the terrorist regimes in the Middle East are swept away, the free world, led by America, must begin to build democracy in their place.

16. We simply can no longer afford to allow this region to remain cloistered by a fanatic militancy. We must let the winds of freedom and independence finally penetrates the one region in the world that clings to unreformed tyranny.”

Some key themes are introduced here, which those who follow Middle Eastern and Zionist affairs will notice. Firstly, Netanyahu pushes for the US to invade Iraq, a wish was fulfilled a short time later.
Secondly, Netanyahu pushes back against calls for Israel to stop its harsh and barbaric treatment of the Palestinians, by simply declaring that Israel has a right to defend itself – even if Israel attacks first and uses missiles and bombs against Palestinian Arabs who throws sticks and stones at it.
Thirdly, diplomacy doesn’t work with terrorists so Israel must keep fighting and killing its enemies (note the dehumanization that comes along with the word terrorist and the big lie that there’s no point talking or negotiating).
Lastly, Netanyahu even promotes the idea of US seeding “democracy” (which has always been a big con – see US infiltration through NGOs) in other nations after the invasions – i.e. more permanent US occupation and military bases abroad, which only serve to expand the US (NWO) Empire! Time for the world to learn that when America or its allies say “democracy”, it’s a code word for forced regime change.

The War on Terror is an Israeli War Strategy 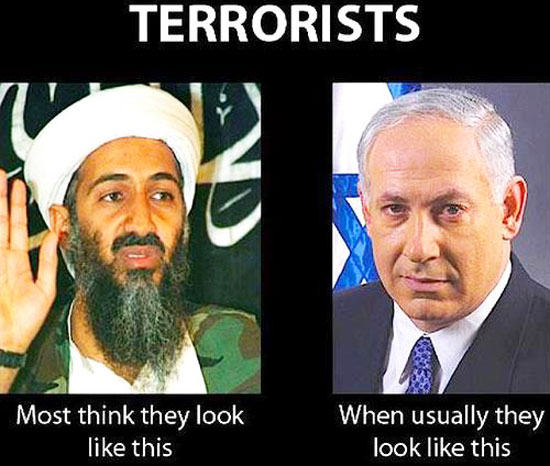 If you are thinking that the term and concept itself of War on Terror has all the hallmarks of a New World Order scheme, you’re right.
This piece from an article by Christopher Bollyn provides further background: “The War on Terror is essentially an Israeli war strategy. It was first promoted on the world stage by Benjamin Netanyahu and Menachem Begin (of the terrorist Likud party) at the Jerusalem Conference hosted by the Netanyahu Institute in July 1979. According to the War on Terror doctrine advocated by Netanyahu, ‘Islamic terrorists’ attack Israel because it is a Western state with Western values. The West, Netanyahu says, is the real target so the U.S. must lead the West in waging a global War on Terror to destroy Islamic terrorists and the regimes that support them. This is exactly what the United States has done since 9/11, at incredible expense to its own population, leaving a trail of devastated nations in its wake.”

The War on Terror™ has been used by Israel to bring in the US (and the West) to help destroy Israel’s enemies by branding them as terrorists. The Zionist State has been fundamental in the creation of fake Islamic terrorism (Zio-Islamic Terrorism™) and in the manufacturing of scary enemies (al Qaeda, Daesh/ISIS, etc.) to serve as an excuse to target sovereign Arab and Muslim-majority nations surrounding them.

Needless to say, the Zionist-controlled MSM (mainstream media) has dutifully played its part by selling the fraudulent War on Terror to a largely unsuspecting public.

The War on Terror™ is an all-encompassing concept with which the NWO is expanding its Empire across the world. It’s a war that can never end. It’s a war whose success or failure can never be measured. It’s a war that leaders can always invoke to justify more money, power and regulation. 16 years on, have enough people woken up to the propaganda in order to break its spell?