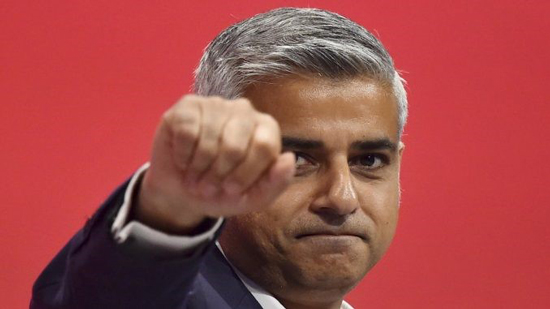 London Mayor Sadiq Khan has approved the opening of a bank that funds Jihadi terrorism and has been banned in the USA.

Khan, known for his sympathy to terror groups such as ISIS, claims Habib Bank’s track record of financing Islamic terrorism does not pose a moral problem for London. 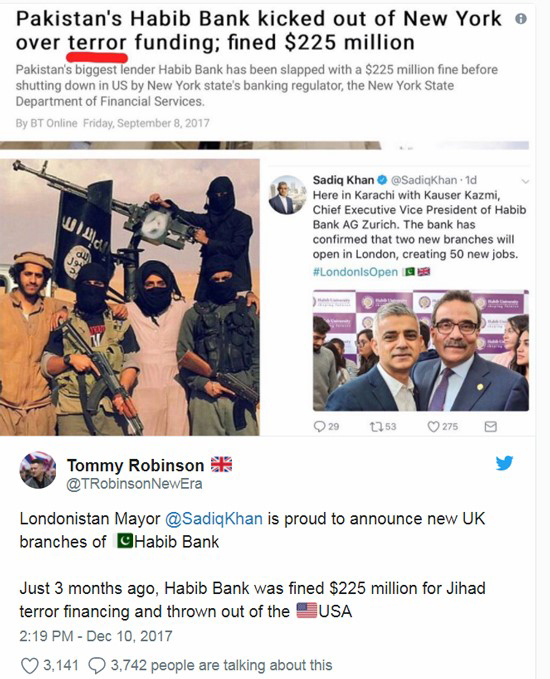 Thenews.com.pk reports: “Concluding the visit to Pakistan as part of the second leg of his six-day two-nation tour, the Mayor of London Sadiq Khan announced a raft of new investments into London.

Speaking in Karachi, Sadiq said that Habib Bank AG Zurich, which already has eight branches in Britain, was planning to expand its business by adding two more branches in London, creating at least 50 new jobs.”

While sharing the idea of expending his banking business in UK, Muhammad Habib, President Habib Bank AG Zurich Group, said: “London is one of the world’s key global cities and a key international market for our bank, so we see this expansion as being an important part of our growth strategy. We are continuing to strengthen our links between the United Kingdom and Pakistan at this important time in the future of both countries”.

During his visit to Habib University, Sadiq said: “This has been a significant visit and one which will reap rewards now and in the years ahead. London already has extremely deep and enduring ties with India and Pakistan, but all relationships need to be nurtured and there has never been a more important time for the United Kingdom to make sure these bonds and links remain strong, and continue to grow”.

“Today [Dec. 9, 2017], I have announced some key investments from India and Pakistan into London which shows that the city is a vital destination for business and will continue to be so”, said the Mayor.

While highlighting Indian investment in the UK, Sadiq said that his promotional agency, London & Partners, has secured more than 400 Indian jobs in the city’s tech sector in 2017, adding that the renowned ICT firm Wipro has revealed plans to open its third new office in the City of London. Wipro has 1800 employees in London and is continuously investing and growing in the region.

Other investments include UPL, Apollo Tyres and Lalit Hotels bringing their global marketing headquarters to London, in recognition of the city’s status as a world class business hub.

During the visit Sadiq was also joined by 18 of London’s high-growth technology companies as part of his International Business Program, a scheme that offers some of the capital’s fastest-growing companies the support they need as they grow into new markets.

During his visit to Pakistan and India, Sadiq met with business leaders and politicians, ensuring that the people in Pakistan and India know that #LondonIsOpen for business, students and tourists. In a major speech earlier in December he also said that the United Kingdom government needed to do more to make sure students from the region continued to come to London, and proposed the reintroduction of a Post-Study Work visa.

The Harsh Truth About Facebook Will Be Heavily Revealed In 2018