Those “copy and paste” disinformation merchants the mainstream media have been up to their tricks again. This time it’s to do with repeating the fake narrative that saturated fat is bad for you. In particular, the MSM have been repeating the sentiments expressed in a new publication by the AHA (American Heart Association) that falsely demonizes coconut oil, recommending consumers should avoid it.

It should be remembered that the AHA are yet another Big Pharma owned and controlled nutritionally illiterate medical institution.

And the MSM’s biggest sponsors are Big Pharma, so it’s no wonder that they would support the AHA’s disinformation given out to the public. The disinformation is based on the long-ago debunked lipid theory which falsely declared that saturated fats and consequent increases in cholesterol give rise to heart disease. As part of the contradiction, actually, those with high cholesterol have been known to live longer.

The lipid theory came from researcher Ancel Keys. Congress later adopted it in conjunction with the UDSA as dietary recommendation. Anyone having any doubts that Dr. Ancel Keys’ research was wrong then look at this terrific video:

Here are some examples of the recent disinformation featuring the Big Pharma sponsored MSM Google News which demonizes coconut oil: 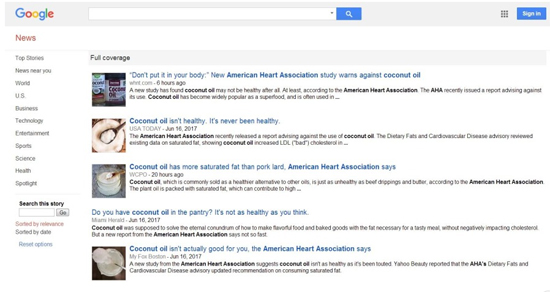 So why the conspiracy..? Why would the AHA and the corporate sponsored MSM disseminate information based on a mere belief that demonizes saturated fat such as coconut oil? Why go against the solid science that supports the health benefits and debunks the lipid theory?

The explanation is easy to see: The Big Pharma owned and controlled AHA is running old tricks again by demonizing saturated fat, in particular, coconut oil, because there are too many people waking up to the realization of the health benefits. That means these people don’t require prescription drugs which hugely fund the AHA and Big Pharma who will not allow their profit margins to be cut down by cheap, natural dietary wellness.

As part of the corruption the “heart disease sickness industry” relies on people buying into the disinformation: The industry wants you to get sick and stay that way through eating high amounts of processed junk foods, in particular high carbohydrates, devoid of any solid nutrition value, which helps promote heart disease.

It wants you to buy into the myth that high cholesterol causes heart disease. That allows Big Pharma to continue selling statins, the cholesterol lowering drug, one of their greatest money spinners. Contrary to Big Pharma’s baseless claims, people with higher cholesterol live longer than those with lower cholesterol. A number of studies have proven this and have therefore exposed the statins scam.

Even if you have the outdated belief that ‘bad’ LDL cholesterol causes heart disease, you cannot demonize coconut oil. That’s because coconut oil contributes to high ratios of the heart healthy HDL cholesterol.

The whole charade revolves around the fact that Big Pharma profiteers on sickness. The evidence strongly suggests that it’s yet another example where Big Pharma is using one of its disease institutions, in this case the AHA, and the paid off MSM to demonize coconut oil and saturated fats in order to maintain profits on drug sales.

In a year, cholesterol lowering statins drug sales take in around $100 billion for Big Pharma. For every four Americans over the age of 50, one of them takes a statin to lower their cholesterol. Lipitor is the most lucrative statin, having grossed around $140 Billion. The side effects of these drugs such as diabetes, liver damage, memory loss and muscle damage have been greatly played down. The need for statins is based on the acceptance of the false lipid theory.

As the war on coconut oil continues, many people need to pull their heads out of the sand. They need to discern the truth of what’s really happening here, see the bigger picture. Recognize those paid off Big Pharma shills, a compliant MSM (the real fake news) and the ignorance surrounding the circumstances. We all need to do the necessary research in order to make decisions for our own good dietary health. Then spread the knowledge of this life-saving information to others.