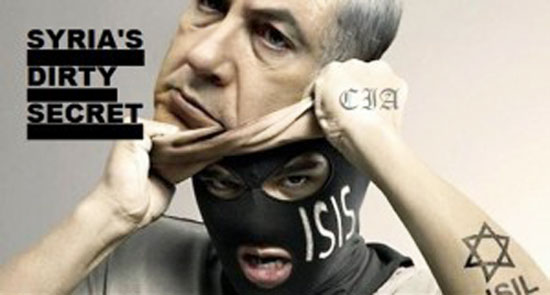 A prominent Syrian military and strategic expert described Israel as terrorists’ accomplice in Syria, warning that Tel Aviv intends to create a buffer zone in the Arab country.

Yahya Soleiman said that by attacking the Syrian army positions in the Golan Heights Israel sent this message that it will never leave the terrorist groups and will defend them to the end.

“There are decisive ties between Israel and terrorists to set up a buffer zone in the Golan like Antoine Lahad region in Southern Lebanon – whose creation plot failed – and this time the situation will be repeated in Syria,” he added.

“Whatever happens in Syria is in line with meeting Israel’s interests, destroying Syria and weakening the powers standing beside Damascus,” Soleiman said.

Noting that Tel Aviv is well aware of the positions of the terrorists’ missile launch pads and knows that none of them is due to hit Israel, he said the regime is seeking to find a pretext to provoke the militants to target the Syrian army forces and this has several times happened.

“The Israeli side has violated the ceasefire plan and kicked out the UN forces to move freely beside the terrorists. We witness how the Israeli convoys move along the borders and transfer the terrorists from Syria to the occupied territories,” Soleiman said.

Stressing that Russia knows the realities in Syria, he said Moscow has tried to force the American side to participate in the peace process in Syria but the US has led all efforts to failure.

Military sources confirmed on June, 26 that the Israeli Air Force, for the second time in a row, targeted the Syrian Army troop’s strongholds in the Southern province of Quneitra.

The sources said that the terrorist groups’ mortar units shelled the Golan Heights at Syria’s border with Israel, and the Israeli fighter jets also bombed the Syrian army centers in Quneitra.

The Arabic-language Elam al-Harbi said the mortar units of Al-Nusra Front (also known as Fatah al-Sham Front or the Levant Liberation Board) opened fire at Israeli positons in occupied Golan Heights in order to give the needed pretext to the Israeli forces to attack the Syrian army.

The Israel Defense Forces (IDF) said that the Israeli Air Force attacked the Syrian government forces’ tanks and artillery positions, claiming that the air raids were carried out after 10 projectiles fell on the Israeli-controlled part of the Golan Heights, Sputnik reported.

At least two Syrian soldiers were killed on June 24 as a result of airstrikes carried out by Israeli forces in the disputed area of the Golan Heights, media reported.

“Two were killed as a result of the airstrike against a position of the Syrian army in the liberated area of Golan Heights,” the source was quoted as saying by the Al-Mayadeen broadcaster.

A source on the ground told RIA Novosti that the Syrian government forces have been repelling a massive attack of Al-Nusra Front (also known as Fatah al-Sham Front or the Levant Liberation Board) in the Golan Heights when they were struck by the Israeli Air Force in the area.

“The (Syrian) army repelled a massive Al-Nusra Front attack on the city of Ba’ath in the Quneitra province (bordering the Golan Heights). The army took up the fight with terrorists. The attackers have suffered losses. (Syrian) aviation and artillery helped repel the attacks,” the source told RIA Novosti.

According to the source, an Israeli military helicopter launched a strike on the Syrian army in Ba’ath at the moment of the Al-Nusra Front offensive.

Syrian government forces said the Israeli warplanes, in fact, targeted a parking lot and a residential building in the suburbs of al-Ba’ath in the Quneitra province. They added that the Israeli airstrike resulted in civilian casualties and material damage, as reported by the SANA news agency.

The majority of such incidents are described as accidental overspills during clashes between the Syrian government forces and militant groups.

The Golan Heights, internationally recognized as Syrian territory, was seized by Israel during the Six-Day War in 1967. In 1981, the Israeli parliament voted to annex two-thirds of the region. The United Nations has repeatedly stated that Israel’s occupation of the Golan Heights is illegal, calling for it to be returned to Syria.

Seven Sugary Drinks That Are Sabotaging Your Weight Loss Goals